Education, roads, taxes expected to be hot-button issues this session 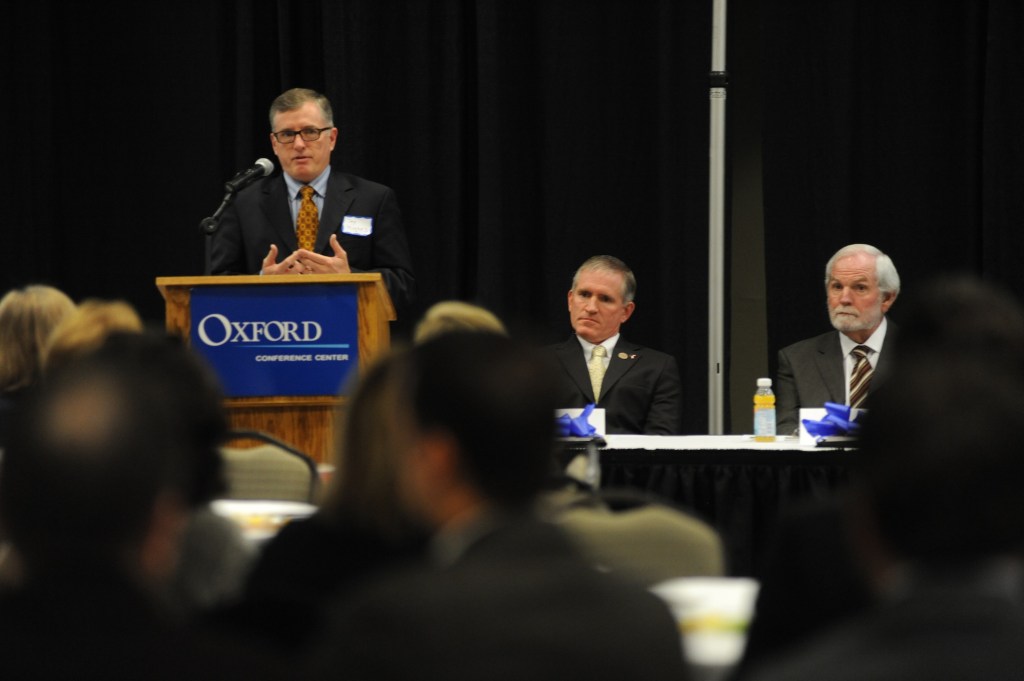 Education, roads and gas taxes will be some of the hot topics during this year’s legislative session, according to some of the legislators who represent Oxford and Lafayette County.

The representatives spoke at the annual Eggs and Issues

Tollison told the group attending the meeting that everyone there lives in a bubble.

With Oxford’s rapid growth over the last few years, having the infrastructure to accommodate that growth requires funds from the state.

“We received $35 million of federal money to use for land acquisition and utility replacement on Highway 7 for the widening project,” Tollison said. “But we can’t use that money to build the road, so that money has to come from somewhere.”

Newly elected Lafayette County Supervisor Kevin Frye asked Tollison what he thought of the proposal and how the plan suggests dividing up the extra funds from the tax increase.

“We’d like to see more than 10 percent coming to the county,” Frye said.

Tollison said the proposed gas tax increase is in preliminary discus- sions and will be closely looked at and more than likely, argued over during the session.

“We want to see how MDOT plans to spend the money, and how much would be coming back to the cities and counties and put it all on the table and make a decision,” Tollison said.

Massengill said while no one likes to pay more in taxes, not many want to drive on dirt roads either.

“Right now, this is only a recommendation from MEC, but hopefully, we can get a plan in place and get some more money for the cities and counties,” Massengill said.

Hughes, who has just started serving his first term as District 12 representative, said that while he doubts he will be appointed as a committee chairman, he is looking at everything with a “child’s eye.”

“I believe I can make a difference and education is the most important thing,” he said. “When industries inquire about Oxford, they want to know what type of school’s we have. We can educate a child for 12 years and have them contribute to the community and our state, or we fall short, and we support them … for their entire life. Nothing is more important than the quality of our education.”

Hughes said some of the top state leaders seem to have the same priorities they have been speaking about recently that include the tax increase on gas for roads, a school choice bill, where a child can go to any school their parent wants them to, despite where they live and a new formula for funding education, that Hughes said hasn’t been revealed yet.

“The school choice for everyone — what happens to those schools that lose students and the money that comes with them,” Hughes said. “There’s power in information. Let’s ask these questions and stay informed. Representatives and senators will listen when you make the effort to talk to them.”

Hughes and Tollison also both support the state requiring school superintendents be appointed and not elected. Out of more than 14,000 school districts nationwide, only 130 districts still elect a superintendent and more than half are in Mississippi.

Mettetal told the group that all their representatives are working hard to make sure Mississippi provides the best services it can to its residents.

“We have to work hard together to continue to do things like funding education,” he said. “Everything is not rosy in Jackson all the time. The governor is expected to make some cuts. But thank goodness we had some conservative leadership and our rainy day fund is full.”

The only other comment from the public other than Frye’s questions was from Circuit Court Clerk Baretta Mosley who said she hopes any bills being passed that involve elections are discussed with those who hold the elections.

“We don’t need a mess like with Voter ID,” she said. “We have to wait five days for two people who didn’t have their ID to come in and bring their identification. That holds up the election for almost a week.”