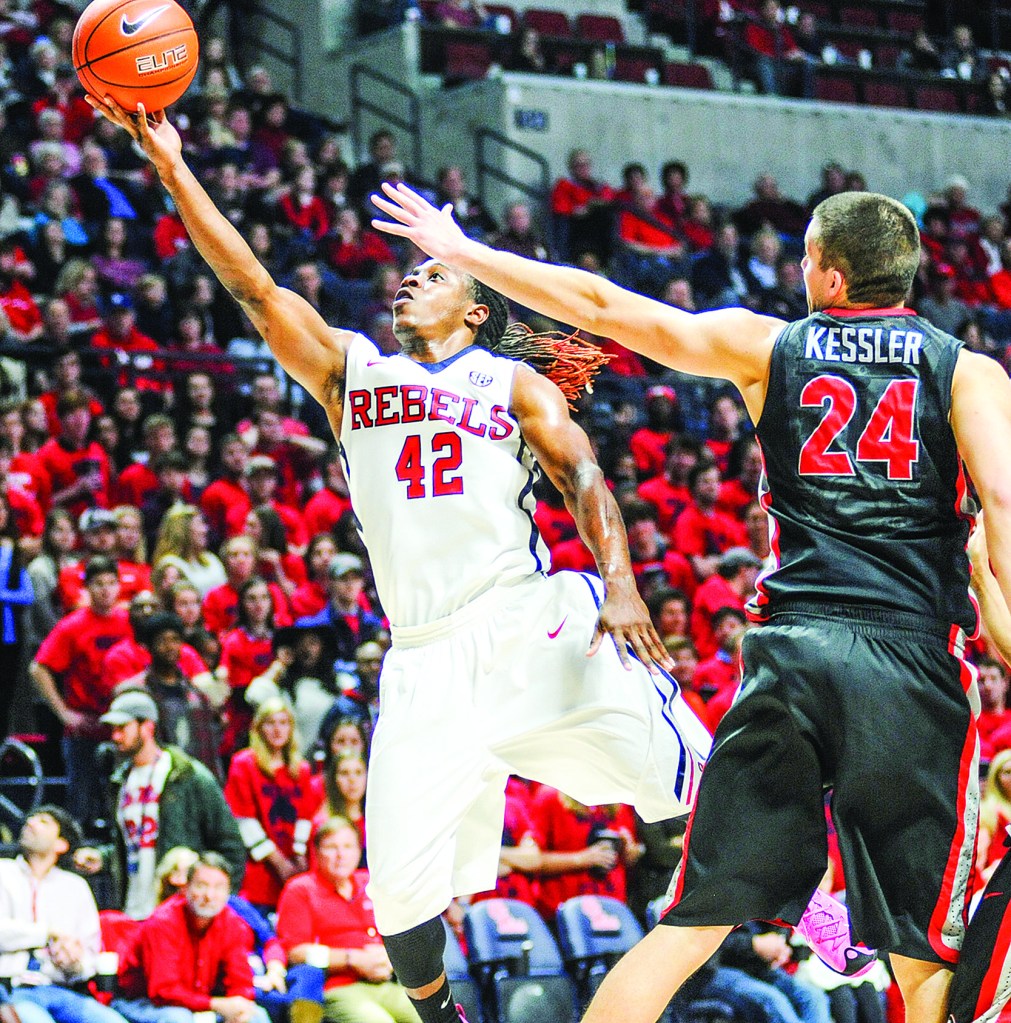 On paper, the scouting report is simple for Ole Miss’ opponents: Stop Stefan Moody, and you’ve got a pretty good chance to win.

But as most teams have come to find out over the last season and a half, it’s difficult to even contain the Rebels’ quick, bouncy senior point guard.

“Moody’s a tough cover,” Alabama coach Avery Johnson said after Moody put 21 points up against the Crimson Tide in Ole Miss’ Pavilion-opening win last week. “He split four of my guys one time and went in (the lane).”

Moody, the former Florida Atlantic signee, was the Southeastern Conference’s leading scorer in league games a season ago in his first year with the Rebels after a brief stop in junior college. Despite opposing defenses always putting their best perimeter defender on Moody — most have been throwing two defenders at him, attempting to trap the 5-foot-9 speedster to get the ball out of his hands and make somebody else beat them — he’s the conference’s leading overall scorer this season at 23.9 points per game.

“That’s what he has to do. If he doesn’t do that, we’re not going to win,” forward Sebastian Saiz said. “That’s what he does. He’s going to take all the shots that are necessary to do it. That’s his job.”

He’s doing it at a historic rate.

Moody has eclipsed the 20-point mark in 10 straight games heading into Wednesday’s game at LSU (8 p.m., ESPN2), the longest streak in program history since Gerald Glass strung together 13 such games in the late 1980s. Former All-American Johnny Neumann has the longest known string of 20-plus point games in program history with 24, according to Ole Miss media relations.

He scored 50 points in all last week against Alabama and Georgia, and the Rebels (12-3, 2-1 SEC) needed every single one of them. Moody scored 14 of his points in the second half Thursday against the Crimson Tide to help the Rebels erase an eight-point halftime deficit for a 74-66 win before capping a comeback from 15 points down against Georgia on Saturday with a slithering layup with 3.8 seconds left to give the Rebels a 72-71 victory.

“If there’s a guy that we need to make a play, it has to be me,” said Moody, who hasn’t scored less than 13 points in a game this season. “I’m the leader of this team. I can’t just rely on other people if they’re relying on me.”

Points in different ways
Moody (358 points) has scored nearly twice as much as Saiz (187), the Rebels’ second-leading scorer, and has accounted for the nearly 32 percent of the Rebels’ offense. His shooting percentages aren’t great — 41.2 percent from the field and just 35.5 percent from 3-point range — but he’s made an SEC-best 133 trips to the free-throw line, making 115 of them.

“I always tell him, ‘Even though you’re super athletic, there’s going to be people more athletic that can play higher than you, but you can be the lowest-playing guy in the country,’” Ole Miss coach Andy Kennedy said. “That’s what I want him to be. I want him to play low, low, low. He’s unstoppable when he plays low.”

Saiz has turned in back-to-back double-doubles while Rasheed Brooks, who’s gone for 10 and 14 points in the last two games, may be turning into a consistent third option. Ole Miss will need the help to keep coming for Moody if the Rebels want to return to the NCAA Tournament for the third time in four years, but he knows he’s required to do the heavy lifting.

“I’ve got to put the weight on my shoulders and handle business,” Moody said.