HPC cracks down on work without COAs 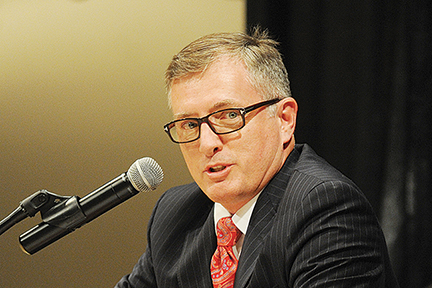 House District 12 representative Jay Hughes is one of two developers the Oxford Historic Preservation Commission recommended be fined for unapproved work on homes within the historic district.

The Oxford Historic Preservation Commission and the Oxford Code Enforcement Division are getting tougher with contractors, developers and homeowners who do unapproved work on homes within the historic district.

During its regular meeting this week at City Hall, the commission recommended that two developers pay fines for doing work outside the scope of the Certificates of Appropriateness they previously received.

The first case involved a garage that was given a COA for renovations in February 2015. In December, the structure was gone. Architect Cory Alger spoke on behalf of the developer, House Rep. Jay Hughes, who is in Jackson. Alger said employees told Hughes that while working on the garage, it fell down.

“There was apparently a lot of rotten wood,” Alger said.

Oxford Code Enforcement Officer Johnny Sossaman said by the time he arrived to the home on Washington Avenue, all that was left of the structure was already removed and put into a Dumpster.

The commission reapproved the original plans for garage renovations, however it is now a new construction project since the structure is missing. The board also recommended the developer be given a misdemeanor citation for doing work without a permit and without a COA to demolish. The fine for no permit is about $386 for the criminal penalty. The civil penalty for no COA can be up to $1,000 a day. City Municipal Judge Larry Little will decide both.

Hughes said after hearing about the commissions’ decision that he was disappointed and felt it was a personal attack against him.

“I regret that I was in Jackson and unable to attend the meeting last night, for what I thought would be a rather simple task,” Hughes said on Wednesday. “We went through a painstaking, six-month effort with the Historic Preservation Commission for a 1934 cottage and garage that were falling to pieces and a health hazard.”

Hughes said the workers were in the process of removing the siding from the “decrepit” garage as ordered by the HPC in February, when the structure collapsed and nearly injured two of his workers.

“I regret that the hearing apparently became about personal attacks over implicit guilt because none of the laborers took pictures of the collapsed building or the cuts on themselves, or that the commissioners assume that the laborers even had smartphones capable of doing so. If that is guilt, I am not sure why no one complaining about it took pictures for the week that the collapsed garage sat there waiting on a Dumpster.”

Developer Alex Bridges also was given a misdemeanor charge for doing work without a permit on a home on Madison Avenue. Sossaman said he is now giving the citations when he sees the infraction instead of waiting to present the case before the commission as was done in Hughes’ case.

“I’m going to give the citation, then their court date is generally about 60 days out,” he said. “That will give them time to come before you to try to get the COA approved and fix whatever the issue was.”

The board approved the COA for the windows and siding and did not vote to recommend a civil case be brought against Bridges.

It is the first time charges have been brought against developers by the HPC for lack of COA infractions.