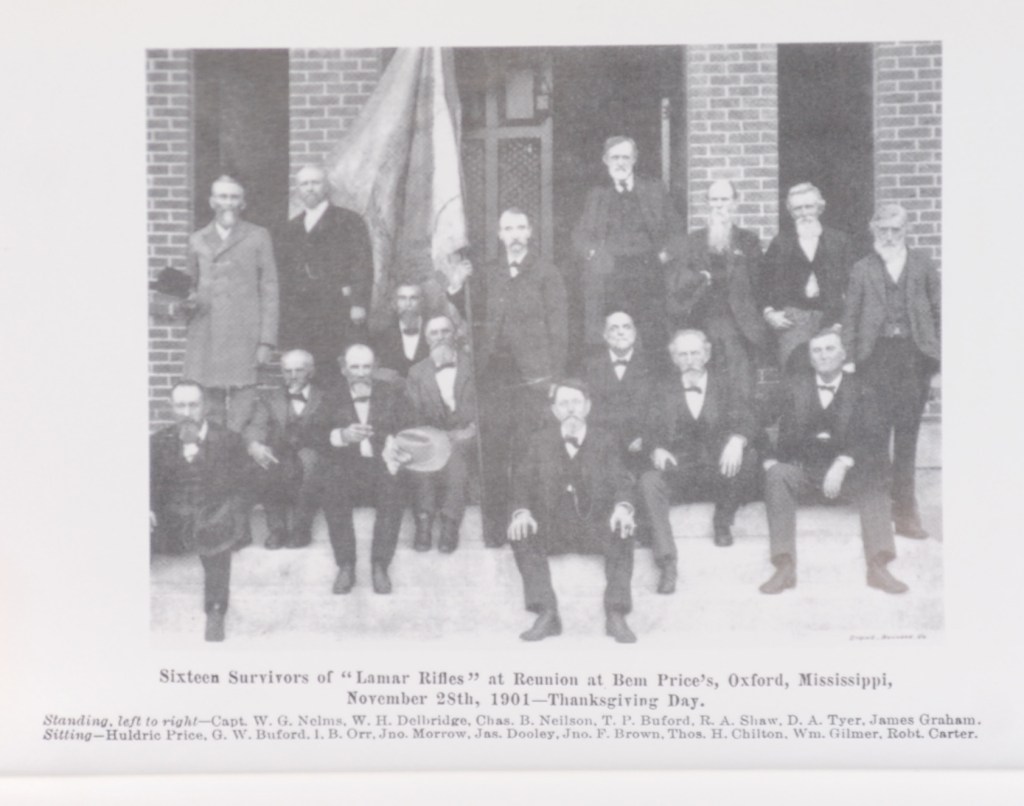 In a column back on Dec. 20, I wrote about the Yankees plundering Oxford before Christmas 1862.

One of the items I wrote about was the theft of the first diploma from the University of Mississippi, presented to James Jones Quarles of College Hill. If you will recall, the return of the item stolen at College Hill, included a letter Capt. James Franklin Dooley wrote to the Chicago TRIBUNE.

In 1927, a former member of the Lamar Rifles, Capt. Dooley, took a chance on the return of items stolen from his parents’ home in Oxford. These items included his “university badges that the Yankee army took from our home when Gen. Grant’s forces were in Oxford, Mississippi, in 1862.” The request was published in the newspaper and he received a reply from a veteran of the Union Army in Wilmett, Illinois.

Along with the reply was J.J. Quarles’ 1851 diploma, in fact the first University of Mississippi diploma. The former Union soldier wrote to Capt. Dooley that he did not have his “university badges,” but he did have the diploma on a sheepskin.

Capt. Dooley was able to find the son of Dr. R.W. Quarles living in Van Buren, Arkansas, and returned to him his diploma. In a bio he wrote shortly before his death in 1939, Dooley states of the diploma, “It was a genuine sheepskin, and was highly appreciated by Dr. Quarles and family.”

Local Oxford resident, Mrs. Charles Dooley, who volunteers at the Lafayette County Historical Society’s room at the public library, received a letter from one of her husband’s relatives in Cumberland, Virginia, Nancy Faxon. Mrs. Dooley had sent her the December 2015 “A Sense of Place” column that included this story of the stolen diploma and their ancestor’s role in the return of the diploma.

Mrs. Dooley gave me the information her relative sent on Capt. Dooley and I thought that what she sent along adds a good finish to that column, mainly for Capt. Dooley’s role as a graduate of our university. It makes me happy when I have written about someone’s relative and their connection with Oxford and Ole Miss and call me with additional information on the subject. I am then able to pass on a little more historical information about our “little postage stamp of native soil.”

Shortly after his birth in 1841, James Franklin Dooley’s family moved to Oxford from Maury County, Tennessee. Dooley wrote in his biography, “When I became of proper age I was sent to school at College Hill, where there was one of the best academies in the state. I finished my course, being prepared for the freshman class, and entered that class at the University of Mississippi that fall (1858) and remained there until the War Between the States.”

Dooley joined the Lamar Rifles at age 18 on Aug. 9, 1861. His two brothers had joined in early March and April and now the three brothers were back together, albeit at war and miles away from home back in Mississippi. The two brothers of Dooley, George and Esom were both killed during the war and Capt. Dooley would be captured at Falling River, when the Confederates were making their way back to Virginia after the Battle of Gettysburg. After parole, he would join the cavalry instead of returning to the Lamar Rifles.

Thank you, Ms. Faxon for the historical data on your ancestor.