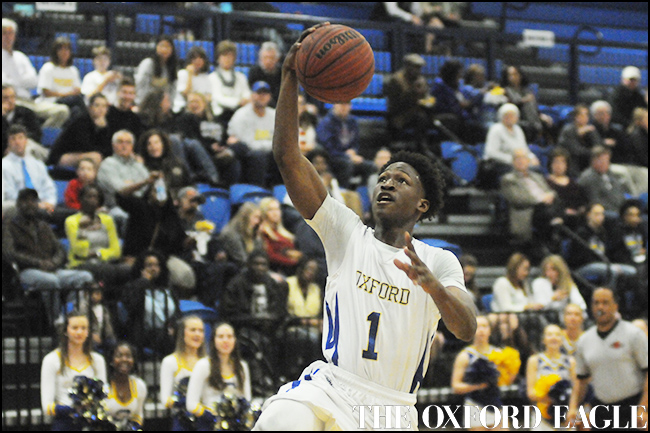 Oxford wasn’t going to fall in an early hole in Region 2-5A play if Jarkel Joiner could help it.

Turns out the Chargers’ junior point guard was responsible for nearly 50 percent of that assistance.

Joiner poured in a game-high 42 points to help Oxford notch an 85-65 victory over New Hope on Friday at the Oxford High gym. The win evened the Chargers’ region record at 1-1 following a loss at West Point in their region opener a week earlier.

“We took that West Point loss way personally, and we just took it right into this game,” Joiner said. “We took our anger out on New Hope. We beat them by 20, and we’re at 1-1 in the district. We feel pretty good right now.”

Joiner finished a point off his career-high, solving every defense the Trojans (11-5, 1-1) threw at him to splash shots from nearly every spot on the court. He finished 16 of 26 from the floor and 7 of 11 from 3-point range while also dishing out six assists.

Oxford (12-5) started the game on a 13-2 run thanks in large part to a torrid start from Joiner and never looked back, building a 49-25 halftime lead. Joiner knocked down 10 of his first 13 shots and all but two of his first nine attempts from beyond the arc to outscore the Trojans by himself in the first half with 29 points.

Said Oxford coach Drew Tyler, “I could tell his legs were under him tonight. Going left, fallaways, going left and coming back right. It wasn’t just that they sent him left, he was coming back, and a few times he split the trap and hit a little mid-range shot.”

Joiner had some help along the way. Fellow guard Christopher Sandroni had 15 points while forward D.K. Metcalf had 10 points, 11 rebounds and seven blocks. Cole Cromwell finished with 10 points and eight boards, and Terry Williams nearly had a triple-double with eight points, nine rebounds and a team-high 10 assists.

The Chargers, who shot 61 percent from the field, needed those contributions to hold off New Hope, which cut a 29-point deficit at one time to 13 at 64-51 early in the fourth quarter with its full-court press turning the Chargers over and leading to easy baskets. But Oxford halted New Hope’s brief momentum with an 8-1 run and coasted from there.

“We had huge games out of multiple kids,” Tyler said. “I think that probably makes it tough on our next opponent. Who do you stop? Where do you really concentrate on when you’re (defending) Oxford up? And that’s what we’ve got to have.”

Lady Chargers cruise
Oxford’s girls had an even easier time with New Hope in the first game of Friday’s varsity doubleheader, using suffocating defense to cruise to a 66-33 win.

Oxford’s Jordan Freeze led all scorers with 19 points. Kyla Malone followed with 14 points while Aliyah Herod chipped in 11, but most of the offense came from a defense that created plenty of scoring chances. The Chargers (14-4, 2-0 Region 2-5A) forced a whopping 45 turnovers, turning many of them into easy baskets.

“Forty-five is a lot,” Oxford coach Cliff Ormon said. “I don’t know about a team record as far as my coaching, but I love the effort that our kids gave tonight. I didn’t really set a goal of how many steals we’d want or turnovers we forced, but I knew there were a lot of them. And it was because we were playing really hard.”

The Chargers set the tone by scoring 15 of the game’s first 16 points and led by 20 after three quarters. Lanoria Abrams and Jada Jamison each scored six points to lead New Hope (5-9, 1-1).