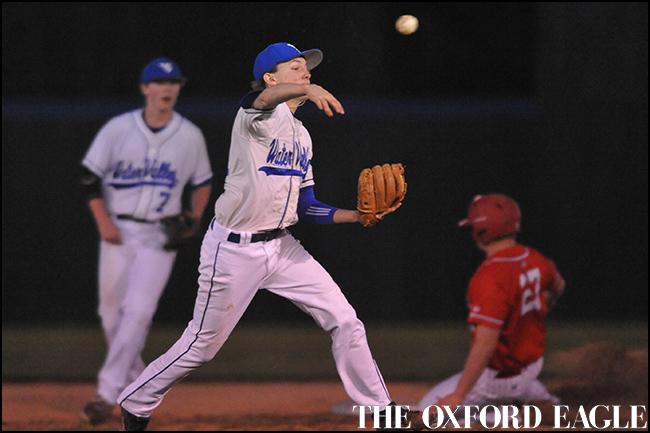 Water Valley shortstop Cooper Clement (14) bobbles the ball but makes the throw for the out against South Pontotoc in high school baseball in Water Valley, Miss. on Tuesday, March 24, 2014. Water Valley won 3-0.

Cooper Clement had plenty of options when it came to where he could continue his baseball career at the next level, but there was only one clear frontrunner the entire process.

The Water Valley shortstop made it official Friday morning, signing with ECCC and choosing to spend the next two years in Decatur.

“After visiting some schools and stuff, I just liked the way the coaches were (at East Central) and the way they talked about building up their program,” Clement said. “I felt like they would have a really good chance to win some games and playing time and stuff like that.”

The relationship between Clement and East Central had an organic beginning as he nor Water Valley head coach Kary Bridges knew any of the coaches to help lure them up to check out Clement play.

The senior’s play in the field and at the plate last season did the talking for them. Clement was the Blue Devils’ most productive bat, hitting .471 to lead the team with the most RBIs among returning players with 18.

At shortstop, Clement had a fielding percentage of .917 and recorded six errors all season with 28 putouts and 38 assists.

“He’s just a very good infielder, swings the bat well,” Bridges said. “He’s a guy that embodies our program with being a talented player but works hard and plays the game the right way and respects the game. He’s a guy with a lot of talent but has the intangibles that’s going to make him an even better player.”

Versatile signee
Clement’s infield talent is not exclusive to shortstop as he was also the Blue Devils’ No. 2 pitcher behind ace Skyler Defer last season. With Defer gone due to graduation, the role of ace could be Clement’s — a more prominent role on the mound that East Central could find valuable, though Clement prefers staying between second and third base.

“I know they know I pitch, but they were looking at me for middle infield and that’s what I want to do,” Clement said.

During the offseason, Clement and the rest of the Blue Devils intensified their weight lifting program, using the Ole Miss baseball team’s weight program. Bridges wanted his team to gain a little grit, and Clement feels it will pay dividends in his final season.

“I got to know (Ole Miss strength) coach (Ben) Fleming a little bit up there last summer,” Bridges said. “They are great with that, and I felt, we’ve always lifted, and this was Cooper’s first year not playing basketball, so he’s been able to be down there with us to lift. I felt we lost some toughness. I thought we needed to ramp it up a bit. We got stronger.”

With the decision of his future taken care of a month before the season begins, Clement is focused on just one thing and one thing only.