Folk and pop art are influences for Jason Heavner 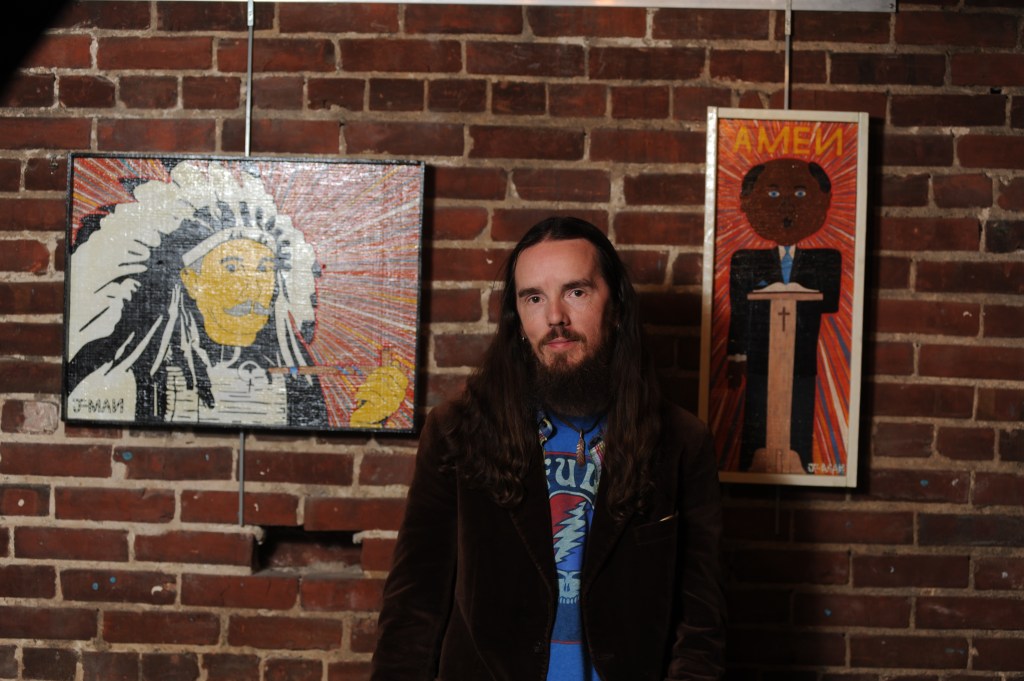 Heavner has developed a following for his paintings that depict the author William Faulkner with some sort of amusing or historic context and a witty saying with the word “faulk.”

The 40-year-old has lived in Lafayette County for the past 12 years, but it was about six years ago when he decided to become a full-time artist. And, once he found his style of blending folk and pop art, demand for his work exploded.

“Those are my two favorite styles and I found a way to blend it,” he said. “I can’t say that it’s folk, I can’t say that it’s pop, because it’s not. I’m very blessed that I found my style that early on. I had been doing it full time for three years when I painted a William Faulkner painting as a joke and that was the first painting that I did the yellow background and the lines radiating out of it.”

He eventually had two showings with Faulkner art during recent annual Faulkner conferences, and now he said it is time to get back to his Christian roots with a focus on positivity.

Specifics for an upcoming show are not set, but he is planning the details that will ensure visitors have a positive experience.

Heavner was born and raised in Jackson, Tennessee, but now enjoys life in the Denmark community of Lafayette County with his artistic family on a mini farm complete with goats, chicken, dogs and an organic garden.

His wife, Amanda, works with fiber arts and has her own business, 13 Chicks Mercantile. His daughter, Lyric, is homeschooled, and has developed an interest in the arts, and has

already had her first showing.

“We are full-time artists and we love art, but we are artists so that we can actually live the life we want to live, which is nature, gardening, without having to get in the car and drive to your 9 to 5,” he said. “We’re home all the time. If we need to go out and trim the hooves on our goats, we can, and then come back in and paint. It’s a cool life.”

That cool life came after trying out a lot of different jobs, and Heavner joked he has a “20-page resume.”

It was during the economic recession when he decided to take the risk with becoming an artist full time.

“I was working at Ron’s Music Center doing audiovisual installation and lost that job,” he said. “This was 2008-2009, and it was hard to find a job, but I was painting the whole time as a hobby. My wife said, ‘why don’t you try selling something.’ So, I was like, ‘OK, why not.’ I painted three paintings and the first day they sat there for sale they sold. That was it and there was no turning back.”

He did have a bit of a learning curve on setting prices for his paintings since food had to get on the table.

Instead of asking people what they wanted to pay, he eventually made price tags.

A way to save money initially was by painting on plywood he inherited from a job at a Batesville horse ranch. People also gave him leftover house paint.

Eventually he could afford canvas, but now he’s returning to plywood because he likes it better.

“I’m a huge lover of the earth,” he said. “This way I’m taking stuff that would have wound up in a Dumpster and making something with it and hopefully it makes people smile or laugh.”

Heavner and his wife are organizers of Makers Market, the monthly venue set up around the courthouse lawn (and inside the Powerhouse during the cold months) for local artists to sell their wares.

“I’ve been involved with that off and on since the creation of it in 2009,” he said. “There were literally four vendors when we got back involved with it, and now we have to turn people away every time because of limited space on the courthouse lawn. There are now 35 at every market.”

Heavner recently filed for 501(c)3 nonprofit status and will officially take over as director when it goes through.

“It’s insane how quickly it’s grown,” he said. “It’s tripled in size. We generally turn away about 20 or 30 artists every month. We have a waiting list.”

Vendors and those who frequent the market can look forward to his work with it, because he plans to throw himself into making it a successful community endeavor.

“I am a creative person. I have to be creative,” he said. “It doesn’t matter what I’m doing, I just have to be doing something. And when I get into something I get head over heels.”

Next up on his to-do list is finishing an Oxford-themed coloring book, which is about halfway complete and will be something the community can appreciate.

“It’s going to be the Oxford I know and love: places, people, the Kudzu Kings,” he said.

Heavner’s work is showcased at The Frame Up art gallery on the Square. It’s the only place to purchase his artwork other than online, but most businesses around the Square have a piece of his up for display.

He also has art available in New Albany, Water Valley and Tupelo galleries.

“I have artwork in all 50 states in galleries and private collections,” he said. “It’s basically the past two years, when I found my style everything just blew up all at once.”

Now that he’s found a niche in the community and state, he’s focused on painting more and staying organized.

But he still wants to get more artwork in more galleries, so that requires a lot of painting.

“Artistically my goal last year was to paint a painting every day — at the end of the year have 365 paintings, and I didn’t even come close,” he said. “So this year I’m streamlining my process. My goal is to paint four to eight paintings a week.”

When he’s produced what he’s ready to show, he will plan something unique for people to enjoy — something different from any other art show where people are just standing around with wine and cheese and staring at the wall.

“My goal is for people to have the most positive experience I can provide,” he said.