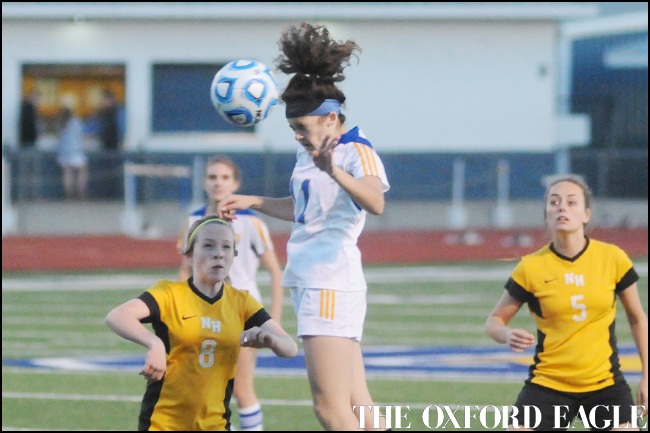 The Chargers got a hold of the ball and rarely let it go against Region 2-5A foe New Hope, cruising to an 8-0 win that was never really in doubt at Bobby Holcomb Field. The victory kept the Chargers (13-5, 2-1 Region 2-5A) one game back of division leader Saltillo for the region’s top playoff seed with three region matches to go.

For a while, the margin separating the teams on the scoreboard didn’t reflect the plethora of chances Oxford generated with their dominance in possession. The Chargers attacked on New Hope’s side of midfield for a majority of the game, peppering the Trojans with a barrage of free kicks, corner kicks and shots that went begging more often than they hit the back of the net.

Six different Chargers scored led by a pair of goals each from Madisyn Longnecker and Ally Shinall, but Oxford led just 2-0 at the half on goals from Addison Mills and Morgan O’Connor, the latter coming just 5 minutes before the break.

“It was almost hysterical,” Oxford coach Hunter Crane said. “It was frustratingly funny just because when you play the way that we played, you want the results to show on the scoreboard.”
But Oxford kept the pressure on in the second half and eventually broke the Trojans (7-6-2, 2-3).

Shinall extended the Chargers’ lead midway through the second half when she got free in front of the net and finished off a pass from O’Connor. O’Connor wiggled free again near the end line a couple of minutes later to set up Zoe Scruggs’ goal to make it 4-0.

Shinall added her second goal minutes later, and Longnecker followed with her two goals for good measure. The lopsided score allowed Crane to rest some of his starters down the stretch with reserve Addie Thompson finding the back of the net in the final minutes.

“We didn’t really change anything at halftime,” Crane said. “We just told them just to keep it up and be confident in your ability, and they did. I think we wore them down a little bit with our possession, so we were getting a little bit more open looks to it.

“It was great to see those balls go in the net in the second half.”

Boys stay perfect in region
Oxford’s boys kept their spot atop the Region 2-5A standings with a 2-0 win over New Hope in Friday’s nightcap.

Neil Chandler got the Chargers (12-7-1, 3-0 Region 2-5A) on the board in the first half before Josh Fulton dialed in from deep  in the second half to give Oxford some breathing room. Fulton built some momentum by dribbling up from his outside back position and ripped a shot past the goalkeeper from about 30 yards out.

The win all but assures the Chargers of locking up the region’s top playoff seed should they beat Saltillo on the road Tuesday. Oxford will travel to New Hope two days later before ending the regular season at home against West Point on Friday.

The Chargers enter the season’s final stretch on a four-game winning streak, which started with a 3-1 win over Center Hill on Jan. 7.
Branch said his team has flipped a switch since then.

“All the coaches and players were frustrated with how we were playing right before Christmas, and we knew we kind of had to get it together,” Branch said. “The game against Center Hill, we figured it out. We’re playing great as a unit. We haven’t had a problem with possession, but now we’re possessing with purpose and creating opportunities.”