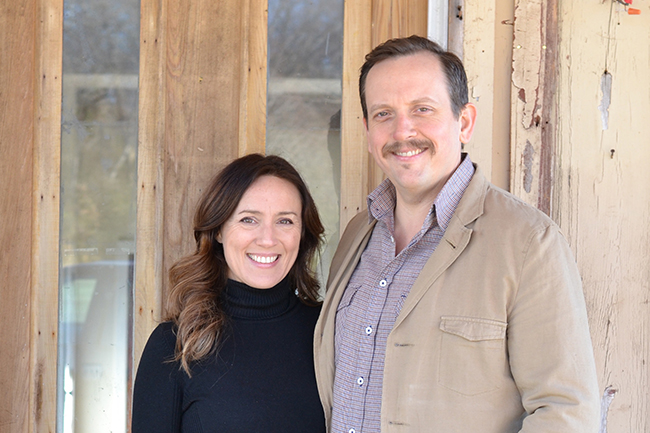 Two veterans of the Oxford food scene are opening a restaurant in Taylor this spring.

Angie Sciurezza and Nick Reppond are currently renovating a building that will be home to an eatery that will be “undoubtedly Southern, but dressed up,” Sciurezza said.

Grit will hopefully be open by May 1 in the old antique store that’s adjacent to The Mill at Plein Air.

“It’s under construction right now,” she said. “The structure is there but we’re building the kitchen and doing renovations on the inside. We’re adding a brick wall and punching out some windows.”

The couple currently runs a catering business, A&N Catering, out of a kitchen in Batesville, but live in Taylor and serve on the restaurant scene in Oxford. While they won’t abandon their catering business, they wanted to be closer to home.

“We really needed a home base,” Sciurezza said. “We moved to Taylor about a year ago and we just really wanted to do something in the community. Ninety percent of our business is in Oxford, but it was more about doing something in Taylor and in our home town.”

Grit will be the couple’s first restaurant and will be a 55-seat eatery that is open for brunch, lunch and dinner on Sundays. Grit’s menu will change seasonally and will feature locally sourced ingredients.

“It’s going to be sophisticated, yet comfortable. That is very important to us,” Reppond said.

As to why Taylor and not somewhere on the Square, Sciurezza said, “Taylor is really growing as Lafayette County expands and we want to be a part of that. And there is some really cool stuff going on at Plein Air right now. It just makes sense.”

She added because Plein Air has resort status, diners will be able to have alcohol with their meals even out in the county, which will be a perk for many.

“I think it’s going to be great for the community,” Sicurezza said. “I think what Nick is planning on doing is going to be special and unique.”

Prior to forming A&N Catering, Reppond had been a cook at City Grocery, Big Bad Breakfast, Snackbar and Lamar Lounge. He has been recognized regionally for his culinary skills and tapped as a rising star in culinary circles. Sicurezza also has a long history in the restaurant industry, most recently as director of operations for the City Grocery Restaurant group.