ON THE RADAR: Joiner’s game has major programs taking notice 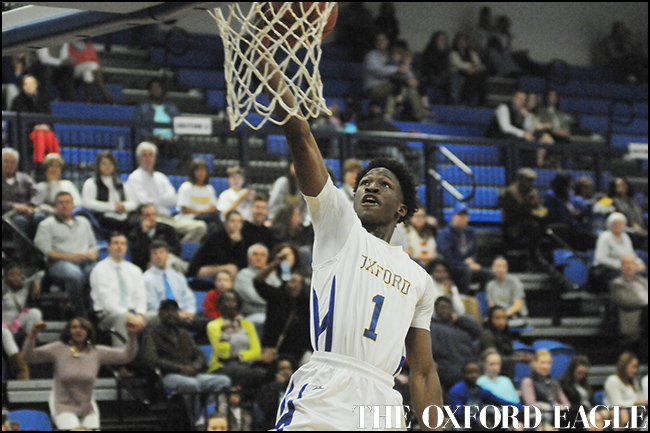 Drew Tyler has watched Jarkel Joiner break down defenses at the varsity level for three seasons now. Yet Joiner can still leave his coach shaking his head in amazement sometimes.

The latest instance came Friday in Oxford’s runaway win over New Hope as Joiner, the Chargers’ standout point guard, knocked down 10 of his first 13 shots and 16 in all. He started with the long ball, stepping into his shots beyond the arc when he was open and creating separation with stepbacks and fadeaways even when he wasn’t to drill all seven of his 3-pointers in the first half.

New Hope tightened up on Joiner in the second half and tried to trap him on every high ball screen in an attempt to get him to give the ball up, but Joiner was usually quick enough to go through or around those double teams to either find an open teammate or finish at the rim himself.

By the time it was over, Joiner had 42 points.

“Late in the game when he’s pulling up from 24 and 25 feet, fading away a little bit from the goal, and he actually split an open-court trap to do it, yeah,” said Tyler, who added that Joiner, who’s just a junior, is the best overall player he’s had in his 19 years as Oxford’s head coach.

“People that keep up with Oxford basketball are now singing the same song confirming what I’ve said about him being the best player that has come through Oxford,” Tyler said.
Colleges are starting to take notice, too.

Joiner already has a scholarship offer from Cal State-Bakersfield and is drawing interest from Ole Miss, Georgetown, Florida and Iowa State. Coaches from Ole Miss have been to the school to watch him play, and Tyler said he gets phone calls about Joiner from some of those schools on a weekly basis.

“I leave (recruiting) to the man above,” Joiner said. “I pray to him every night. I want to go where I’m comfortable at. My family, we talk about it all the time. I really don’t think about it too much sometimes because I know I’ve got one year left.”

Shouldering the load
Joiner is averaging 26.3 points per game for a team that lost 48.5 of the 74.3 points it averaged a season ago to graduation. He’s scored 30 or more in six of the Chargers’ 17 games this season and has gone for at least 40 twice, including a career-high 43 points against Two Rivers (Arkansas) back on Dec. 12.

“It all starts in the morning,” said Joiner, who’s shooting nearly 40 percent from 3-point range. “When I wake up, I think about how it’s kill time. I’m ready to hoop. I get myself in my zone that nobody can’t break me out of. I just lock in.”

Joiner isn’t usually the biggest guard on the floor — he’s generously listed at 6-foot-1 — but his speed, quickness and knack for being able to create his own shot even when he’s being crowded were all evident to Tyler early in Joiner’s career. Joiner broke into the starting lineup the second half of his freshman season before leading the Chargers in scoring last season (14.7 points per game) while starting alongside four seniors.

“His dribble can go into another dribble or straight into his jump shot,” Tyler said. “You just don’t know. So as a defender, you have to give a little bit of ground so he won’t get past you, but then you’ve got to get up in him so he won’t raise up on you.”

Joiner and his coach liken his game to another local standout at the same position: Ole Miss’ Stefan Moody. Joiner said he specifically watches how the SEC’s leading scorer handles the extra defensive attention he gets now that it’s becoming a more common occurrence for Joiner.

“I really look up to Stefan Moody and him playing at Ole Miss, how explosive he is,” Joiner said. “He’s low to the ground already, but he gets lower. I look at that a lot, and I look up to him a lot.”

When the time comes, Tyler believes Joiner can have a similar impact at the next level.

“I think with more explosion and just getting more high school games under his belt and becoming that verbal leader that he is in the process of becoming right now, I think he’s going to be a (heck) of an SEC guard,” Tyler said.