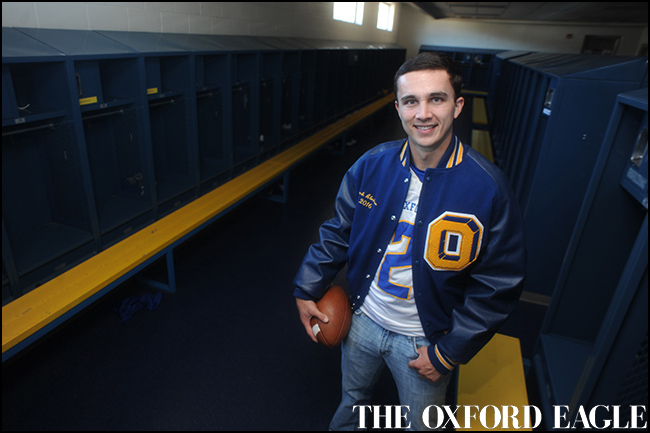 Turns out Jack Abraham will play his college ball in Louisiana after all.

Abraham, Oxford’s senior quarterback, verbally committed to Louisiana Tech during an official visit to the school over the weekend. Abraham announced his decision on his Twitter account Sunday morning.

“Whenever I got there, I just felt at home,” said Abraham, who hosted Louisiana Tech coaches for an in-home visit Thursday before visiting the campus with his parents over the weekend. “The guys there, the players are good guys. You can definitely tell there’s a family atmosphere. The facilities are awesome. Socially, it’s awesome, athletically and academically. All those three are definitely very important. It’s just a perfect fit for me all in all.”

His commitment comes more than a month after Abraham backed off his longtime pledge to Tulane after the school fired coach Curtis Johnson in November and replaced him with Willie Fritz, who ran the triple-option offense the previous two seasons at Georgia Southern. A true pocket passer, Abraham reopened his recruitment shortly thereafter and chose Louisiana Tech over South Alabama.

Abraham said his decision is final this time. An early enrollee, Abraham has already signed a financial-aid agreement with the school and will report to Louisiana Tech in March to go through spring practice.

“Having these guys stick with me through the entire process, I respect them for doing that,” Abraham said. “It means a lot to me obviously because other than La. Tech, I might have one other offer. I feel like La. Tech would’ve been the place I wanted to go, and luckily they want me. It’s just a perfect fit. I love it there, and I’m ready to get down there.”

The 6-foot, 195-pound Abraham, a two-time EAGLE Player of the Year, set single-season school records for passing yards (5,091) and touchdown passes (57) in his final season with the Chargers on his way to being named Mississippi Gatorade Player of the Year. He finished his career with 11,967 passing yards and 130 scoring tosses.

Abraham’s focus now is preparing to push for playing time as a freshman now that the Bulldogs’ starting job is up for grabs with Florida transfer Jeff Driskel out of eligibility. He’ll be joined at Louisiana Tech by teammate Zach Cousar, who gave his verbal pledge to the Bulldogs in November.

“That’s definitely huge knowing that I’m going to be able to go in and compete either way at first, and then if I don’t get that job at first, then I’ll get more time to compete and get that job.”

The 6-foot-7, 320-pound Jamison was the Commodores’ left tackle the last few seasons, helping Lafayette run for 211 yards a game this past season. Jamison also had offers from Southern Miss, Troy and Central Arkansas.