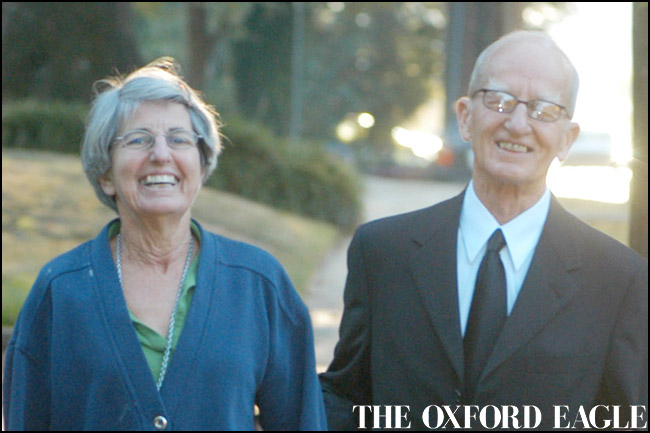 Al and Becky Moreton were small in stature but their love of education, the law and Oxford made them giants to most people in the community.

The Moretons were killed Monday afternoon when their vehicle crossed over a median on U.S. Highway 49 for unknown reasons and struck a Ford Explorer traveling south, according to the Mississippi Highway Patrol. The Simpson County cor- oner’s office said they were killed instantly. Three people in the Explorer were taken to the hospital with injuries.

Al Moreton, 82, remained in Oxford after receiving his law degree from the University of Mississippi in 1961 when he was hired at the U.S. Attorney’s Office of the Northern District as an assistant attorney in Oxford. It was then when he started to wear his iconic black suit and white shirt that he continued to wear most days, even after retiring from the U.S. Attorney’s Office in 2004.

He and his wife, known to most as “Becky” left Oxford in 1962 for Yale University where Al received a master’s degree. They then spent a year at England’s Cambridge University for a second master’s degree in criminol- ogy. After working in Washington during the civil rights era helping

to create new civil rights laws with the Department of Justice, Al worked as an administrative assistant for Sen. John C. Stennis for about two years. He practiced law for about a year on the Mississippi Gulf Coast until Hurricane Camille when the couple returned to Oxford.

Retired Assistant U.S. Attorney and author John Hailman called Al Moreton his mentor and role model and dedicated his last book, “Return to Guntown: Classic Trials of the Outlaws and Rogues of Faulkner County,” to Al. He said Oxford has lost a classic, unique couple.

“Everyone knew them on sight and everyone loved them,” he said. “There was no one else like them. Becky was so full of energy and Al was so calm, but they complemented each other.”

The Moretons had two chil- dren, Beth and Elliott, who live in Vermont and North Carolina, respectfully.

Becky, 78, served on several boards in Oxford including the Oxford School Board and most recently, the Oxford Pathways Commission where she continuously fought to keep Oxford’s streets safe for pedes- trians. She and Al walked daily, some times together, sometimes apart.

“Becky was passionate about improving Oxford — from helping host youth theater events to advo- cating for safer and easier ways to walk to school and work,” said Kate Kellum, chairwoman of the Oxford Pathways Commission. “Her kind and persistent presence with city leaders is one of the reasons the Pathways Commission was formed. Oxford is a better place than it would have been with the Moreton’s vision for and dedication to our community. We will miss the warm waves and smiles so many of us got as Al and Becky walked about town.”

Kellum said one of her most prized possessions is a gift from Becky — a framed copy of a New Yorker cover with a person using a bike for transportation with a con- fused expression looking at people riding stationary bikes.

An attorney and a former U.S. attorney for the Northern District, Jim Greenlee, said Oxford has lost two of its most beloved residents.

“Al was a humble gentlemen, one of the finest attorneys anyone could hope to be,” Greenlee said this morning. “A lover of the law, and did he love his Becky — and she adored him. They both loved their wonderful, brilliant children. Al is an important part of the jurisprudence of Mississippi. Al and Becky walking around their beloved Oxford, watching over it, will be so, so missed.”

Mayor Pat Patterson said he had known the Moretons for many years and that Heaven “must surely be a better place” today.

“What a loss,” he said this morn- ing. “Al and Becky Moreton were absolute treasures of this community. Their public service, their love of people and their community involvement speaks for itself. Wherever there was a need, they were there.”

Waller Funeral Home is in charge of the arrangements for the couple’s service, however no definite plans were made this morning. Oxford University United Methodist Church Pastor Eddie Lester said the church would be hosting the service since the Moretons were members and active in the Sunday reading group and working as volunteers at The Pantry with the church.

“They were an important couple to this church, and to the Oxford community,” Rester said this morning.