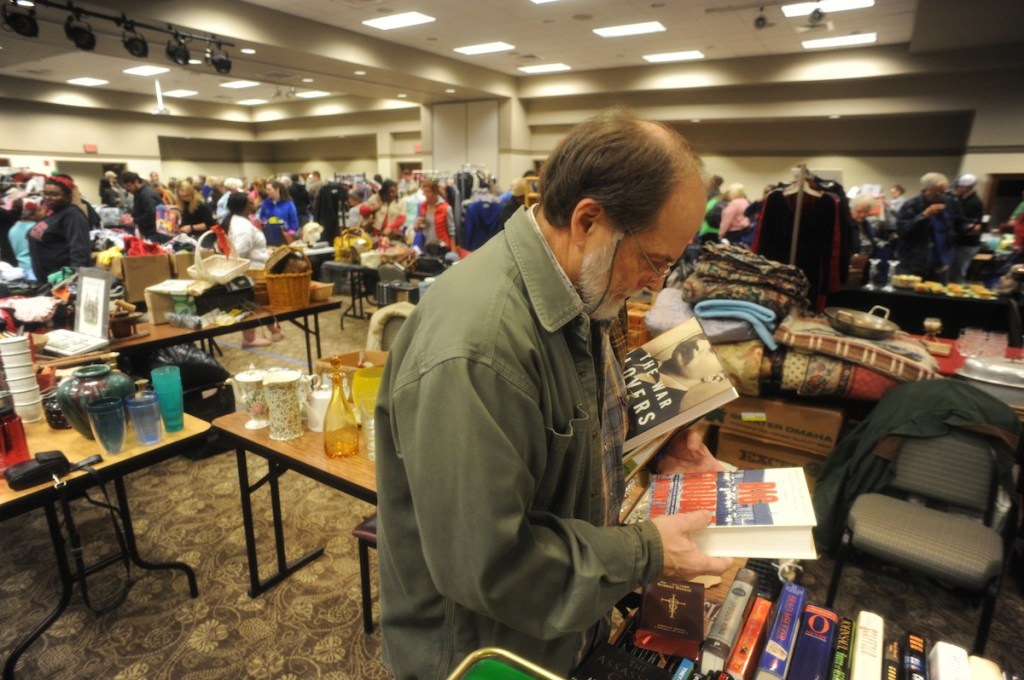 Paul Dakin looks over books for sale at the 7th Annual Oxford Indoor Yard Sale at the Oxford Conference Center in Oxford, Miss. on Saturday, January 16, 2016. The conference center ended the 2015 fiscal year hosting over 450 events and totaling $837, 731 in revenue.

The Oxford Conference Center finished off 2015 with double the amount of revenue earned in 2013 — the year the city almost closed the center.

Conference center manager Hollis Green presented the annual report to the Oxford Board of Aldermen Tuesday showing the center earning $837,731 in revenue in 2015, down a bit from 2014 when the center took in $1,002,272.

Revenue was down prior to 2013, but expenses were high.

Discussions about the future of the conference center started in summer 2013 during the budget process when city leaders questioned the success of the facility that costs about $760,000 a year to run. About half of that is the repayment of the bond that was used to build the facility in 2004. All necessary funding comes from the 2 percent Food and Beverage Tax. The city was spending about $250,000 to $400,000 a year from those funds to operate the 10,000-square-foot facility.

At a public hearing in December 2013, several community leaders voiced opposition at closing or repurposing the building saying the conference center is a vital part of Oxford’s economic development, tourism and offers nonprofits or smaller organizations an affordable venue for meeting space.

The board voted to continue with the center and tasked Green with reducing the expenses and raising revenues.

“If the numbers are good, it’s because of the staff,” Green said. “You all made the decision to hang in there and you made the right decision. We have the best staff and it’s the best group I’ve ever worked with.”

The fiscal year began on Oct. 1 and already the center is way up in revenue compared to previous years. So far the center has earned $295,156, which is doubled from previous years during the same three-month time period.

— Heard a report from Mayor Pat Patterson that the city’s Baptist fund is worth $31,900,000 and commended investment firm Glenmede for being conservative and protecting the original $30 million investment during volatile financial time

— Heard the first reading of an ordinance that will define carports in the Land Development Code.

— Heard the first reading of an ordi- nance that would allow food trucks in apartment complexes with special per- mission from the planning board.

— Heard the second reading and held a public hearing on an ordinance gov- erning food trucks. No one spoke out against the ordinance.

— Heard the second reading and held a public meeting regarding changes to the planned unit development at Oxford Commons.

— Adopted a Resolution of Intent to issue a general obligation note, not to exceed $800,000 for the purchase of machinery and equipment for Oxford Fire Department, purchase turf for fields at FNC Park, financial software for the city clerk’s office and the purchase of a new air conditioning unit for City Hall.

— Authorized Daniels and Associates to perform design and construction engineering services for a water line extension from Highway 8 to Belk and South Lamar boulevards and from the intersection of Belk Drive Extended and Old Taylor Road to the Whirlpool water treatment plant and for water and sewer utility relocations to facilitate roadway construction by the Mississippi Department of Transportation on Highway 7.

— Authorized the change order for $3,575 for quantity adjustment water and sewer relocations at FNC Frontage Road on Highway 7 South.