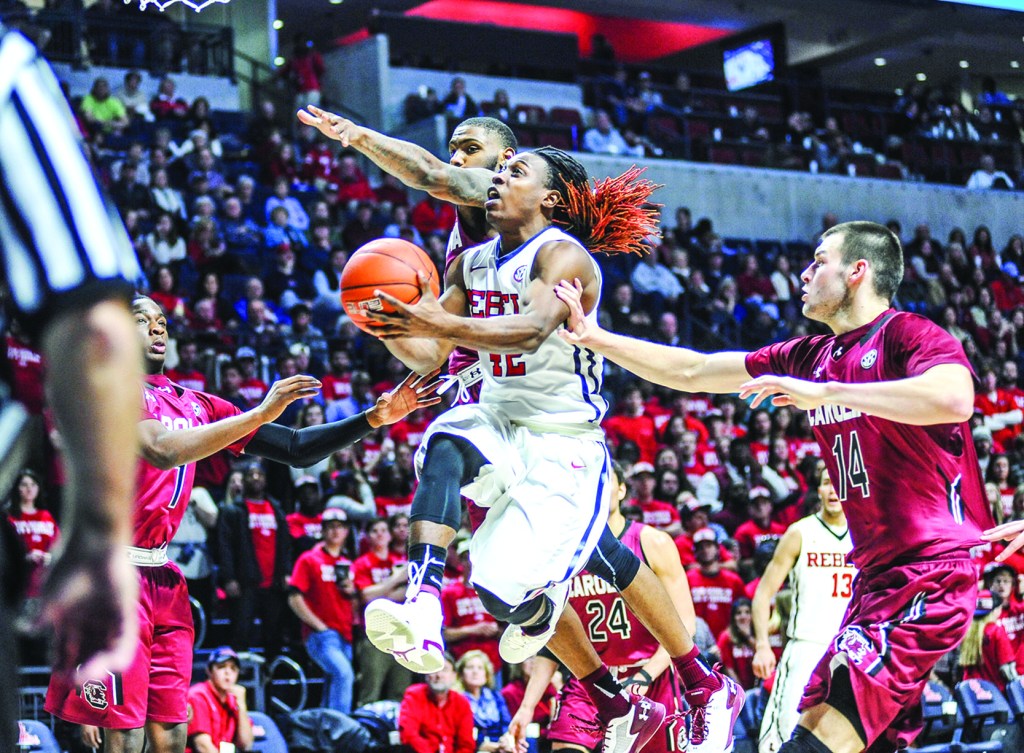 Playing without Sebastian Saiz and Martavious Newby, the Rebels got their usual contribution from Stefan Moody and much-needed boosts from Anthony Perez and Marcanvis Hymon to lead South Carolina by double digits with 4:13 left in regulation, but the 24th-ranked Gamecocks rallied to force overtime and eventually handed Ole Miss its third straight loss with a 77-74 win at the Pavilion.

Moody led all scorers with 24 points, becoming the first player in program history since Gerald Glass in 1989 to score 20-plus points in 13 straight games. He also became the 38th player in school history to score 1,000 career points and needed just 52 games to do it.

But the senior point guard tweaked a hamstring after assisting on a basket by Terence Davis that gave Ole Miss (12-6, 2-4 Southeastern Conference) a 64-53 lead with 5:17 left in regulation and immediately went out. Moody came back in about a minute later, but the Rebels scored just one basket the rest of the way as South Carolina (17-1, 4-1) ended regulation on a 13-2 run to force overtime and eventually add insult to a day full of injuries.

“We’ve just got to deal with it,” Ole Miss coach Andy Kennedy said.

Saiz and Newby were both held out with eye injuries. Saiz, the SEC’s second-leading rebounder, had surgery Tuesday morning on a partially detached retina, though Kennedy said he wasn’t sure how long Saiz would be out. A timetable for Newby’s return is also unknown after he sat with fluid build-up that caused swelling.

As for Moody, who didn’t play the final 1:58 of extra time, Kennedy said he likely strained his hamstring but couldn’t say whether he’d miss any games.

“He wanted to play. Obviously we want him to play, but he just couldn’t move,” Kennedy said. “But despite all of that, if we could’ve just made one play. … To beat a ranked team, to win an SEC game, you’ve got to make a play. Somebody’s got to make a play, and we didn’t get it done.”

A steal and a dunk by Donte Fitzpatrick-Dorsey drew Ole Miss even at 72 in overtime, but Michael Carrera corralled a loose ball on the ensuing possession and made a basket in the lane while being fouled. Carrera, who led the Gamecocks with 19 points, made the free throw to give South Carolina a three-point lead it added to down the stretch as the chance for Ole Miss to notch its second top-50 RPI victory slipped away.

Laimonas Chatkevicius added 17 points and 10 rebounds for South Carolina, which outrebounded the Rebels 49-37 and scored 19 second-chance points. Duane Notice chipped in 14 points to help the Gamecocks overcome a 1-for-15 shooting night from leading scorer Sindarius Thornwell.

Perez finished in double figures for just the second time all season with a season-high 16 points and six rebounds while Hymon had 10 points and nine boards while playing a career-high 42 minutes in Saiz’s absence, but Ole Miss shot just 34.8 percent (8 of 23) in the second half and made just 59 percent (16 of 27) of its free throws.

“We don’t know if Sebas is going to be back for our next game or if what happened to Moody is going to be real bad with a pulled hamstring or whatever,” Perez said. “Just keep our heads up and don’t think about that we just lost three games in a row. If you think about it, it’s not going to be good.”