No leads in similar ATM robberies 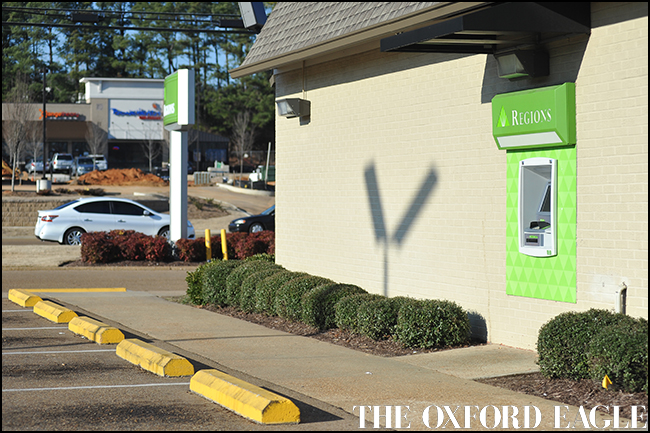 Bruce Newman Regions Bank branch on West Jackson Avenue has been the site of two armed robberies in recent weeks at the ATM.

Police have no new leads to report in the two recent and similar Regions Bank ATM armed robberies, but rewards for information are now at $2,500.

The most recent armed robbery took place Saturday at 5:12 a.m. at the branch on Jackson Avenue. Another occurred around 6 p.m. Dec. 15.

Police reported in the incident that took place Saturday, the victim was approached by a black male who came from behind the bank.

“He was wearing dark clothing and had a red bandana over his face,” said OPD Maj. Jeff McCutchen. “As he approached he pointed a weapon at the victim and demanded money. He was given money and then he fled the scene.”

The Dec. 15 robbery was on a Tuesday night and had a similar situation.

“They were approached by a black male wearing a red bandana over his face,” McCutchen said. “The suspect pulled a gun and demanded that the victim give him money. The victim took money from the ATM and gave it to him. The suspect then fled on foot behind the bank.”

McCutchen said police are not certain if the same person is responsible for both robberies, but on Tuesday they put out fliers with a photo of the suspect obtained from surveillance footage. They delivered fliers to the apartment complex behind the bank in an attempt to find more information.

“We are still trying to get more images from the area to assist in identifying the suspect. If more are gathered we will make those available,” he said.

McCutchen said the agencies are in contact with Regions Bank about the situation, but recommended residents be aware of their surroundings when using that ATM and any others.

“If you use that ATM try to have someone with you,” he said. “This person is striking at random so it’s hard predicting when it might be a dangerous time. Armed robbery is a serious offense and when we have repeated incidents it causes all of us to be more vigilant to the issue.”

Regions Bank spokesman Jeremy King said the bank is taking a fresh set of eyes to the bank location and routinely evaluates security.

“Regions takes the safety of our customers very seriously,” he said. “We are working closely with law enforcement investigating the matter. And the company conducts security assessments on a regular basis to evaluate security precautions at all locations.”

McCutchen said there is a reward for information through Crime Stoppers and encouraged residents to call if they saw anything suspicious, especially because the person is armed and dangerous.