DOWN, NOT OUT: Rebels look to end losing skid against No. 9 UK 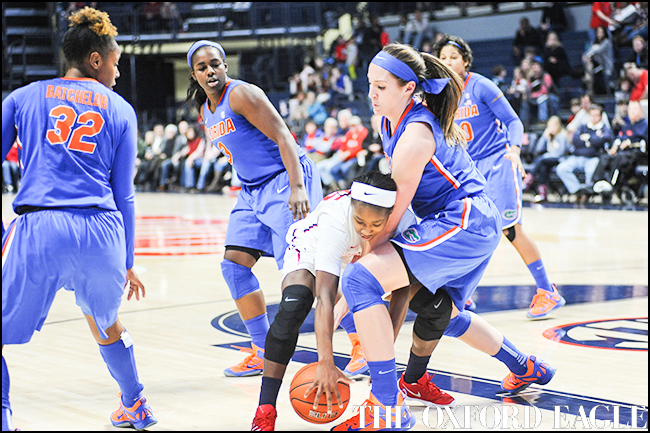 It has been a rough start to the new year for the Ole Miss women’s basketball team.

The Rebels are riding a four-game losing streak while playing a stretch of five games against five ranked opponents.

After beating Vanderbilt on Jan. 3 to start their Southeastern Conference slate, the Rebels (9-9, 1-4 SEC) have lost to LSU, Florida, Texas A&M and most recently Mississippi State on Monday.
Florida was unranked at the time but coming off an upset win against Tennessee the game before while Texas A&M and Mississippi State were top-10 opponents at the time they played them at College Station, Texas and Starkville.

It does not get any easier with yet another top-10 team awaiting them in the form of No. 9 Kentucky tonight at the Pavilion at Ole Miss (8 p.m., SEC Network).

“I think a lot of it has to do with our youth,” Ole Miss coach Matt Insell said. “We’re in the midst of a very tough schedule and league, on the road. It’s hard on the road in this league. I don’t care who you play. You’re playing a bunch of top-20 teams with a bunch of freshmen and sophomores that have never been asked to do anything that I’ve been asking them to do.”

Youth is a prominent description when one glances up and down the Ole Miss roster. There are five true freshmen that have all seen playing time, including Jonell Williams as well as Alissa Alston and Torri Lewis that have earned multiple starts this season.

A’Queen Hayes leads the four sophomores while Erika Sisk, Shandricka Sessom, Shequila Joseph and Bretta Hart are Insell’s juniors that are having to play like seniors given he does not have any.
The group, which is returning starters minus Tia Faleru and Gracie Frizzell from a season ago, has experience, but the results have not translated onto the court since conference play has begun.

Defense lacking
Before this current losing streak, Ole Miss had stifling defense that held teams to no more than 61 points in a stretch of 10 games that started back on Nov. 27 and ended against Vanderbilt.
Since then, opponents have averaged 80.2 points, scoring no less than 76 points.

The struggles have not be exclusive to the defensive end as Ole Miss is averaging 57.7 points a game offensively and has not scored more than 65 points during the past four games, going on spurts of up to nearly five minutes without making a basket at times.

Before that, the Rebels were lighting up the scoreboard, averaging 71.5 points a game.

“What’s hurt us is we just haven’t shot the ball well,” Insell said. “We’ve played well in the non-conference and getting the same exact shots we are now and we’re not shooting the ball well. It’s not that we’re bad shooters, it’s just the ball’s not going into the basket for us. Once it finally goes in the basket for them, their confidence is going to explode and they’re going to be right back.”

Ole Miss welcomes a Kentucky team that it beat the last time the two teams met in Oxford with the Rebels defeating the Wildcats 67-59 on Feb. 23 last year. It was also the last time Ole Miss has defeated a ranked opponent as Kentucky came into the game ranked as high as No. 10 in one poll at the time of the game.

The Wildcats (14-2, 3-2) enter tonight’s matchup coming off a win over Auburn on Sunday. They are led by Makayla Epps, who is averaging 15.9 points a game, while Janee Thompson and Evelyn Akhator are averaging double figures with 12.5 and 12.1 points per game, respectively.

After matching up against teams with post players as tall as 6-foot-7, Insell is happy to see his team line up against a Wildcat team that is not as lengthy.

“What we’ve got to do is what we did against them last year, pressuring them and making them get out of their sets,” Insell said. “We’ve got to get into their bench. … They’re a very beatable team. They’re a team we match up well with. I like our matchup. I like a couple different things that we can do to them to make them struggle. We have to execute.”