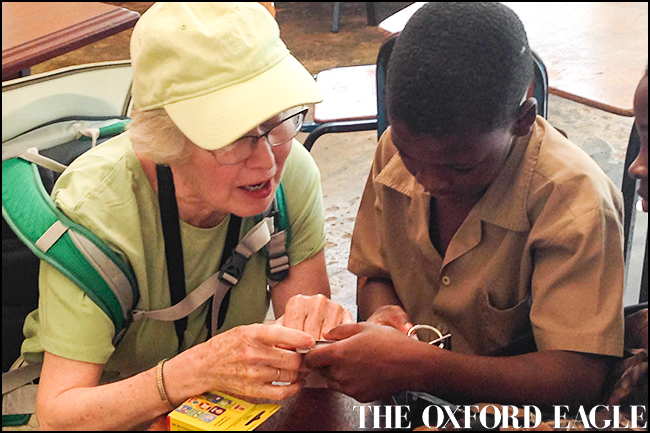 An Oxford missionary team was blessed while in Jamaica.

Team leader Jean Shaw said, “This is the best mission trip I’ve been on — and one of the best trips including family trips and travel with friends and tour companies.  Loved it.”

Shaw said she still feels energized by the experience.

The mission trip was made possible through Praying Pelican Missions with Brent and Cathy Kirk along with the help of Dillon Fowler and Andre Eldemire.

The group left early Saturday morning on Jan. 9 and arrived at the guesthouse provided late that night. The next morning, the group attended church services in Bunkers Hill. They were introduced to a “loud,” yet authentic worship sessions and led Sunday school and devotional time.

Monday, the real work began. For the next three days, the team would arrive before classes started at a local school to tutor and assist teachers. Most children seemed to be shy the first day, but it did not last too long.

For their physical education class, McLellan led the group that taught the students baseball. The school had received a donation of equipment, but children only knew how to play cricket. It was a learning experience, but by the end of the week students were already hitting home runs.

After lunch at school, the group would take the bumpy ride back to the Roland Anderson guest house to build the bunk beds. Starting from scratch, the team completed five bunk beds in three afternoons. Stasny and a couple of locals were experienced in building furniture, but the rest were relatively novice. The beds built will provide more sleeping quarters for missionaries in the following years at the guest house.

Thursday morning, goodbyes were said to the students. Several homemade cards with flowers taped to them were given by the children with “We’ll miss you all” and “I love you” written on them.

The group was driven to the town of Falmouth where they visited a hospital. Robinson, Shaw and Gillenwater had made prayer shawls and hygiene care packages to give out to the sick. Later, supplies were delivered to a local convalescent home.

When the reflective session on the trip was held, words like “inspiring, and “family” described the way everyone felt.

Delaney Bondi, team member, said, “The part I loved most about my trip to Jamaica was the love we were shown by everyone we encountered.”

The mission trip came to an end and the OUUMC missionaries returned to the winter weather in Oxford. While the trip seemed quick, the memories made will last forever.