Garden Terrace to get playground 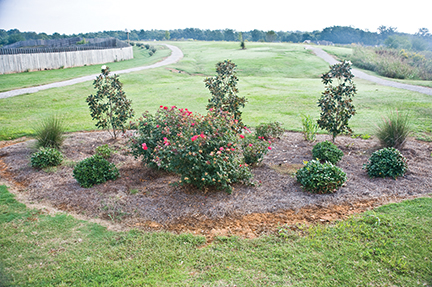 The Oxford Park Commission is asking for the public’s help to give them ideas on what type of playground equipment they’d like to see at the Garden Terrace Park.

Currently, the park is just green space, with a small walking trail and a pavilion.

Last year, OPD budgeted $50,000 toward playground equipment for the small pocket park that was constructed in 2014 after the city received a grant from the Mississippi Department of Wildlife, Fisheries and Parks for $100,000. The city chipped in an additional $25,000 and the half-mile walking trail and pavilion was constructed.

The half-mile, 10-foot wide asphalt walking trail twists and turns on about five acres of land. The Garden Terrace Property Owner’s Association voted in 2009 to deed the land over to the city. City grant writers applied for the grant in 2011.

Garden Terrace sits on the west side of town just off Thacker Road, which connects to Highway 6.

“We are now ready to bring people in and we’re reaching out to those who would be using the park — the moms,” said Seth Gaines, executive director of OPC.

OPC made an online poster and shared it with the Oxford Mom and Tots Facebook group in hopes of getting some ideas for equipment.

“We’d like to see what the community would like out there and see if it would fit within our budget,” Gaines said.

Next week, three playground equipment companies will be meeting with Gaines and taking a tour of the park.

“We’ll talk to them about the budget and they’ll take some measurements and give us some proposals,” Gaines said. “We will also provide them with the citizens’ ideas that we get.”

While $50,000 seems like a lot of money, Gaines said playground equipment can be costly and the city wouldn’t skimp on quality.

“But it’s still enough to make a really nice playground for the kids out that way,” he said.