Hartley is Volunteer of the Year at The Pantry 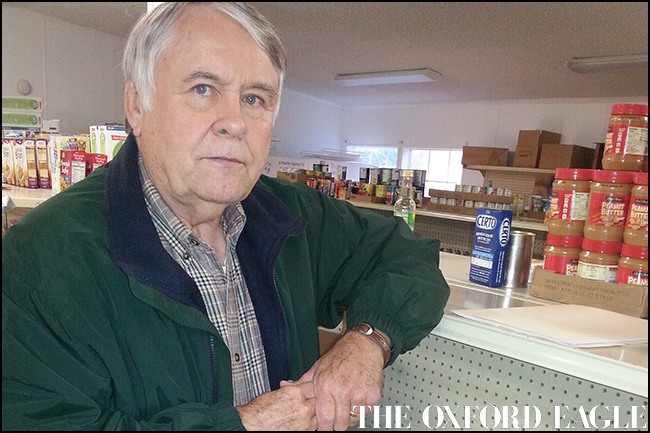 Gene Hartley is The Pantry's volunteer of the year, in Oxford, Miss. on Monday, January 18, 2016.

For approximately the last two decades, Gene Hartley has been volunteering his time at Lafayette County’s largest food bank. On Monday, The Pantry honored him for his years of dedicated service as its 2015 Volunteer of the Year.

“Time gets away,” Hartley said. “It doesn’t seem like it should be quite that long.”

Ann O’Dell, who has been volunteering at The Pantry since its inception 33 years ago, said Hartley is very deserving of the honor.

“Gene is an amazing volunteer,” O’Dell said.  “A quiet gentleman who observes closely, shares ideas for improving our operation and spends untold hours before, during, and after his managing The Pantry during the month of December, making sure everything runs smoothly. We are fortunate to have his leadership and expertise.”

Hartley and his group of volunteers from North Oxford Baptist Church used to take November and December as their months to volunteer and now devote their time to the entire month of December, which is one of the busiest of the year for The Pantry, according to O’Dell.

“And I have never heard any of them complain,” O’Dell said to those in attendance prior to Monday’s board meeting.

Hartley was humble in accepting the recognition.

“When I was working, I didn’t have a whole lot of time to volunteer, but I tried to pick a few things where I thought I might make the most difference. So I had some friends who were already doing this and it was rewarding to them so I decided I would help them. Then after I retired I had more time to devote to it so I was able to take on a few more responsibilities.”

Hartley said he gets a great deal of satisfaction in volunteering at The Pantry, which the latest statistics indicate continues to play a vital role in the community for those in need.

In 2015, The Pantry assisted 5,059 families and 12,257 individuals, according to numbers provided during the board meeting.