Saiz out, Moody ‘day-to-day’ for MSU 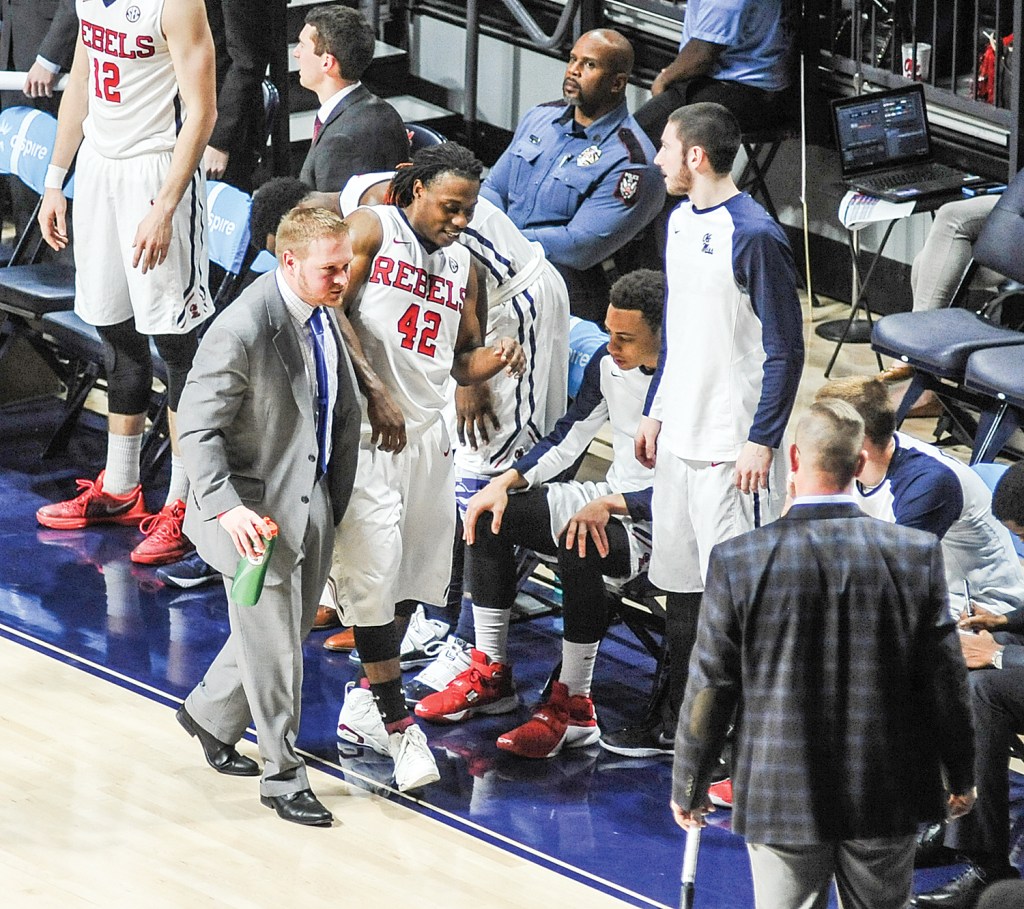 Stefan Moody (42) is helped from the court after injuring his hamstring against South Carolina at the Pavilion at Ole Miss on Tuesday. Moody will be a game-time decision Saturday at Mississippi State.

Ole Miss will be without its top rebounder for the second straight game when the Rebels travel to Starkville to take on rival Mississippi State on Saturday.

The Rebels may not have their top scorer or defender either.

The injury bug bit Ole Miss (12-6, 2-4 Southeastern Conference) hard Tuesday when Sebastian Saiz and Martavious Newby were held out of the game against South Carolina with eye injuries and Stefan Moody couldn’t finish the overtime loss after straining his hamstring.

Saiz will miss Saturday’s game (1 p.m., SEC Network) and likely next week’s games against Auburn and Kansas State at the least after having surgery Tuesday on a partially detached retina, Ole Miss coach Andy Kennedy said Thursday. Saiz is averaging 12.8 points and 9.8 boards a game.

Kennedy said Moody’s pain has “been cut almost in half” since he pulled up after making a pass from midcourt late in regulation Tuesday and hobbled to the bench before being removed from the game for good in overtime. But Kennedy said the SEC’s leading scorer (24.3 points per game) hasn’t practiced all week and will be a game-time decision.

“He’s much more mobile. He’s still day-to-day,” Kennedy said of Moody. “We don’t believe that it was a tear. It was a strain, which is obviously a microtear, but his leg has responded well so far.

“Honestly, I’m going to let him make the call. We all realize that he’s a pretty important piece with what we’re doing, but if he’s not 100 percent, he will not play Saturday — or as close to 100 percent as he can be.”

The eyelid in Newby’s right eye is still swollen and affecting his vision. That pressure will have to subside before the senior guard returns to the lineup.

“They’re trying to medicate that with drops and get the pressure down,” Kennedy said. “Obviously when the pressure is higher, it has an adverse effect on your vision. That’s where he was when he saw the doctor last.”

Should Moody not be able to go, true freshman Donte Fitzpatrck-Dorsey, who had six points and three assists in 12 minutes Tuesday, could get his first career start at the point against Mississippi State (7-10, 0-5). Another freshman, Terence Davis (seven points and two assists in 25 minutes), has become a heavier part of a suddenly thin rotation at guard while sophomore Marcanvis Hymon had 10 points and nine rebounds in his first start in Saiz’s absence.

Ole Miss will need more of that from its young players as the Rebels look to end their three-game losing streak with a fifth straight win over Mississippi State dating back to the 2013-14 season. The Bulldogs, led by senior forward Gavin Ware’s 16.4 points and 7.6 rebounds a game, have had some close calls under first-year coach Ben Howland, losing by a point to No. 10 Texas A&M, five to Tennessee, and, most recently, three at Florida.

“They’re still a group that’s been through a lot of battles,” Kennedy said. “We know they’ll be ready.”