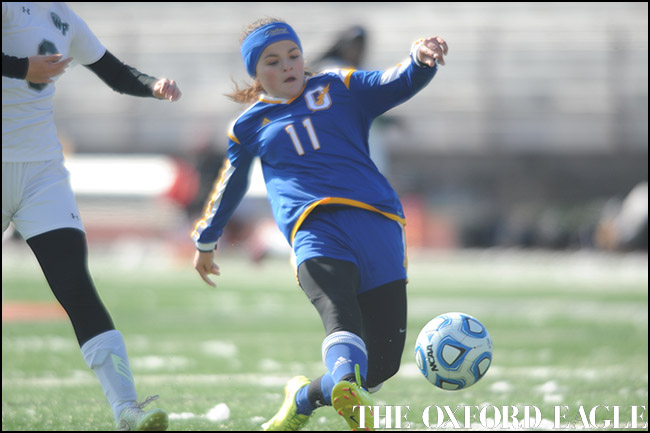 With snow on the field and in the bleachers, the Oxford High soccer teams hosted West Point in Region 2-5A action Saturday afternoon at Bobby Holcomb Field.

The matches were scheduled for Friday evening, but a snowstorm in the area pushed them back a day.

“This is the first game in my career that I’ve ever played with snow on the field,” Oxford girls coach Hunter Crane said. “(Boys) coach (Jonathan) Branch and I worked real hard on the field yesterday and got here early (Saturday) morning and tried to get the field ready to play. We were excited to get it in.”

Oxford made quick work in both matches, which had to be played due to postseason ramifications, sweeping the Green Wave in convincing fashion.

After beating the Green Wave 11-0 at West Point on Jan. 13, the Lady Chargers continued their dominance Saturday with another 11-0 win. The win clinched a playoff berth as Oxford can be no worse than the No. 2 seed heading into this week’s playoffs.

“Just coming out, doing what we do with possession and knocking the ball around and giving people opportunities around the net,” Crane said. “It was supposed to be senior day, but we pushed that back to when we could have better weather. All the seniors got a goal, so it was exciting for them.”

The scoring started early and often for Oxford (15-5, 4-1 Region 2-5A) with Madisyn Longnecker scoring the first goal in the third minute of action. Longnecker added another goal 10 minutes later for the quick 2-0 lead. Morgan O’Connor did the rest in the first half, scoring three goals in the 15th, 18th and 22nd minutes to give Oxford a 5-0 lead at halftime.

Nicole Wilkins and Jordan Repka added goals in the 46th and 49th minutes, respectively. Sarah Nash scored in the 50th minute while Longnecker added her third goal in the 59th minute. Zoe Scruggs scored in the 68th minute while Sarah Valentine found the back of the net as time expired for the winning margin.

Boys handle business
It was not the offensive explosion the girls exhibited earlier in the day, but the result was the same with the Oxford boys defeating West Point 6-1 to also punch their ticket to this week’s playoffs.

Senior Connell Yoste put Oxford on the board with a goal in the 13th minute off a free kick from about 25 yards out that found its way through the West Point defenders, curling in on the lower left side of the net.

“I thought we played really well,” Branch said. “With the stretch coming up, I anticipated not getting a lot of our main guys a lot of minutes, trying to keep them really refreshed. Because we’ve got a game Monday, a game Tuesday and then we’d play Saturday.”

Sophomore Gray Jenkins added a goal in the 22nd minute off another long-range attack that took a helpful bounce to give Oxford (13-8-1, 4-1) a 2-0 lead. Junior midfielder Demircan Usuk scored the third goal in the 38th minute while John Handy Jennings added one in the 52nd minute.

“What we wanted to do was get a couple on them, and then we felt good about our defense and goalkeeper,” Branch said. “We did exactly what we wanted. The good thing about it is we’re so deep that we could bring the other guys in and we wouldn’t have any drop-off at all and that’s exactly what happened.”

Oxford will travel to New Hope Monday to close out the regular season and play matches that have been rescheduled twice due to inclement weather. If the Chargers can win both games, they will each secure the top seed in 2-5A and host first-round playoff matches Tuesday.