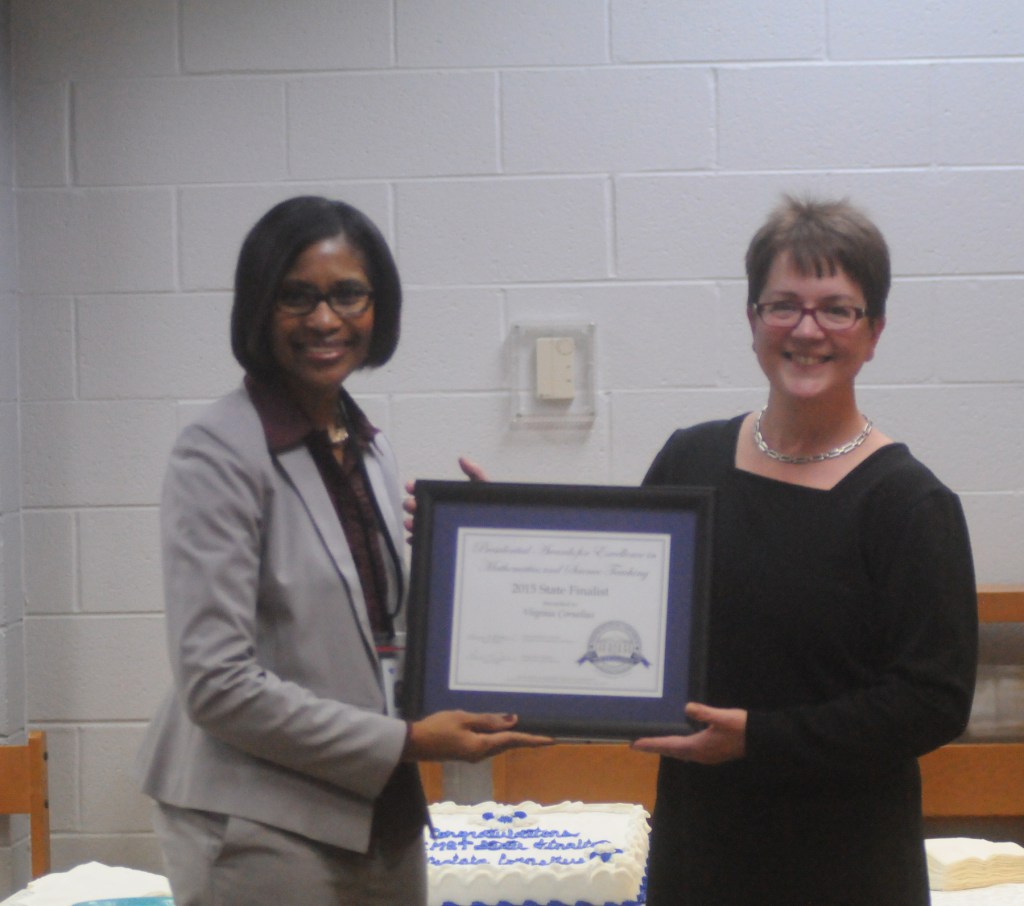 Mississippi Department of Education Director of Professional Development Trecina Green, left, presents Lafayette High School math teacher Virginia "Virge" Cornelius with an award for being a finalist for the Presidential Award for Excellence in Mathmatics and Science Teaching in the Lafayette High School library Wednesday afternoon.

A Lafayette High School math teacher is celebrating her nomination as one of six 2014-2015 finalists for one of the highest honors a math teacher can achieve.

Virginia “Virge” Cornelius celebrated being one step closer to the Presidential Award for Excellence in Mathematics and Science Teaching Program with cake and support last week.

Cornelius said part of her job as a teacher is to ensure there are more students who grow up with a love of math, learning and who hopefully grow up to be teachers.

Also in attendance at the ceremony were two former students who are currently teachers, which goes to show Cornelius’s dedication to fostering more teachers is more than just words.

“These are the hallmarks of her students,” Green said.

Although this is the second time Cornelius has been nominated, this is the first time she has become a finalist. However, both processes of applying each year have caused her to grow as an educator.

The application process required her to film herself teaching a lesson. Additionally, she also began blogging about her experiences. Cornelius has been praised as a teacher, but she said she still feels “average.”

“It’s really about the small day-to-day stuff. It’s not about the big celebration,” Cornelius said. “It’s a good exercise to do this kind of huge application because it makes you reflect back on everything that you have done over the course of your career.”

Through reflection, Cornelius said she has tried to incorporate more independent learning. She has tried to focus learning around each student discovering the process.

Cornelius does not stop teaching when summer arrives. She travels to New Hampshire and teaches students from all around the nation at a summer camp called Wolfeboro.

The recipient of the award will be announced later this year at an unspecified date, but Cornelius hopes to know by the end of May. However, it could be as late as the fall before a final decision is announced.

Snow Day: County had no major problems due to…