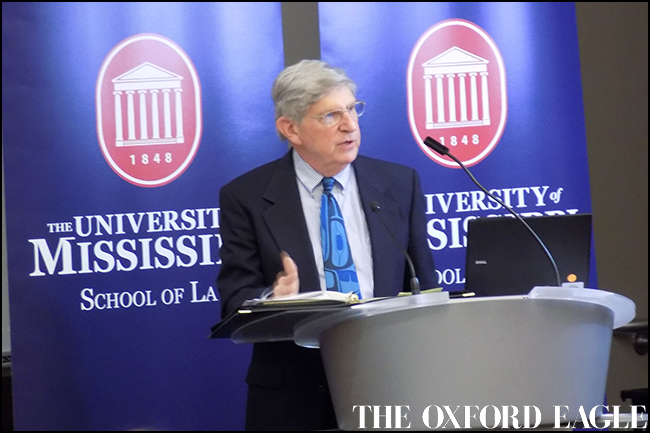 Alyssa Schnugg Professor Emeritus John R. Bradley jr. was among those who spoke at the ceremony commemorating the University of Mississippi’s partnership with North Mississippi Rural Legal Services on Thursday at the Robert C. Khayat School of Law.

When politics weaved its ugly head into the marriage of the North Mississippi Rural Legal Services and the University of Mississippi in the late 1960s, NMRLS joined several other poverty programs as part of the Community Extension Program of Mary Holmes Junior College which agreed to be grant administrator for the legal services program after Ole Miss backed out.

Twenty-five years ago, the University of Mississippi School of Law Clinical Programs and NMRLS partnered together once again to bring legal services to those individuals who might not otherwise have representation due to the cost of hiring an attorney.

“It was a beautiful marriage,” said Constance Slaughter-Harvey, the first black female to receive a law degree from the University of Mississippi. “Then there was a divorce. But now, we celebrate the last 25 years of the second marriage.”

NMRLS and the OM clinical programs celebrated their anniversaries together Thursday evening at the Robert C. Khayat School of Law.

Slaughter-Harvey spoke at the event via Skype video conference. She spoke of the early days of NMLRS.

“It was a haven to me,” she said. “It was a home for several other black students as well. There was a time when black law students were made to feel they didn’t belong. When you were at Legal Services, you could breathe a different kind of air.”

The student in the 1960s, as they do today, volunteer and work with Legal Services, giving students hands-on experience to practice law and low-income residents quality representation.

Professor Emeritus John R. Bradley Jr. also spoke at the ceremony. He joined as faculty in 1966. He spoke on NMRLS’s history and beginnings when Dean John Morse, dean of the law school in 1963-1969, arranged for federal funding to start the program, originally called Lafayette County Legal Aid. The first office was opened in 1966 in Oxford. Then Gov. John Williams “was no friend of this kind of activity,” put pressure on Ole Miss to cut ties with the program that was involved with suits against school districts and the state due to segregation.

Mississippi Supreme Court Justice Jess Dickinson not only spoke at the celebration Thursday but after the program, he entertained by playing blue grass music.

Dickinson admitted to not knowing much about NMRLS in 2004 when he was appointed to the Supreme Court. He attended an Equal Justice Conference shortly after.

“My life was transformed,” he said. “I listened to all these stories and plights of these people, losing their children, their homes. It ripped my heart out. I kept hearing there was not enough funding for programs to help.”

Dickinson went back to the Supreme Court and told the other Justices what he saw and heard.

“I don’t think my court has ever had a single vote in opposition in any of the programs to try to assist legal services, so proud of the support of the court and my fellow justices.”

However, more work needs to be done and attitudes of Congress needs to change, according to Dickinson.

“If Congress funded legal services completely, we’d still be turning away half the people who need help and that breaks my heart,” he said. “Congress needs to look at equal justice as a constitutional right, a right of the people to stand equal in court as they do in criminal court.”

NMRLS’s funding now comes from the national Legal Services Corporation. Congress appropriates funding to that organization then LSC gives grants to NMRLS and the Mississippi Center for Legal Services, which serves the remaining 42 counties of the state. In 2016, NMRLS received $1.6 million, combined with small grants from other sources makes up a $2.6 budget. There are four offices — Oxford, Clarksdale, Geenville and West Point — that include 32 employees, 13 full-time lawyers and hundreds of volunteers who are mostly students from the Law Clinical Program.