Snow Day: County had no major problems due to the snow 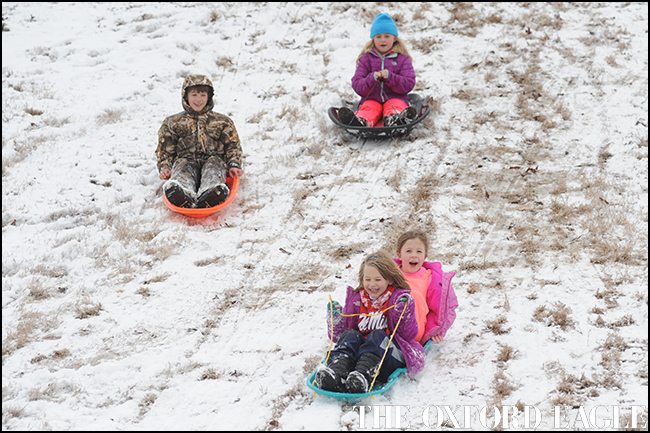 Bruce Newman Laura Lovelady, front, Lillie Roberson, back, Niles Lovelady, left, and Olivia Williams, top, sled down a hill at the University of Mississippi, in the snow on Friday. Snow began falling after 5 a.m. and all area schools are closed.

Residents were able to enjoy the snow Friday with no damage reported and few disturbances on the roadways.

Emergency Management Agency Director David Shaw said residents and officials were prepared for the snow and were waiting Friday morning.

He said it started in Abbeville around 5:15 a.m. and quickly spread throughout the county. The heavy snow came to an end around 7 a.m.

The National Weather Service in Memphis said throughout the county the snowfall ranged from one to two inches.

“The frozen precipitation started sticking to roads and bridges almost immediately north of Oxford,” Shaw said. “MDOT, the county road department, the city street department and the University Physical Plant worked on the roads and streets in their respective jurisdictions and were able to clear or make most roads passable within a few hours.”

On Oxford streets, Oxford Police Maj. Jeff McCutchen said there were only four wrecks Friday through Saturday afternoon. One crash had injuries and police do not believe the snow or ice was a factor.

“Friday was a great day,” McCutchen said. “The city departments worked really hard to be prepared for the coming snow and mix. It was obvious to us as we had very few wrecks.”

Shaw said outside of the city limits there were only four wrecks reported and they were between 6 a.m. and 10 a.m. Friday. They were on Highway 6 and no injuries were reported.

“I’m sure the fact that the schools, county offices and state offices were closed on Friday contributed to the low occurrence of traffic accidents,” Shaw said.

With temperatures not much above freezing Saturday, Shaw encouraged residents to be careful while traveling on the roadways because there could be slushy areas and black ice until the area warms up today.

He also urged protecting pets and pipes from freezing.

Mississippi Highway Patrol responded to two minor accidents in the county with no injuries. MHP worked 11 wrecks in the district with only two having minor injuries during the weekend weather.