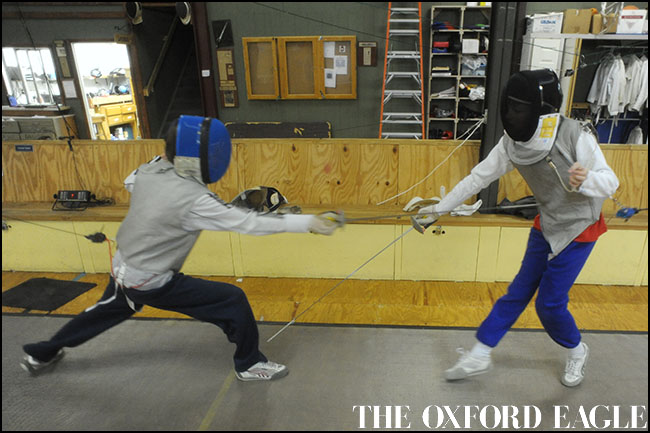 An Oxford man has been fencing for roughly 50 years and he shows no sign of cutting back.

Recent retiree John Matthews learned how to fence in the 1960s. He has been fencing since 1989 with the Oxford Fencing Club.

“We get bruised, but it’s fun,” Matthews said.

He will soon be competing in the 70-year-old and above category but that does not keep him from hanging out with younger folks. He teaches students ages 8 and above.

After retiring from the University of Mississippi’s School of Pharmacy as an instructor, Matthews decided to devote more of his time to teaching his hobby to others.  He is also been teaching two classes of fencing for years, both on and off campus.

He is still involved in education and continues to teach a fencing physical education class for Ole Miss. The class meets once a week for two hours and is one-hour credit.

Additionally, the students he instructs at the Fencing Club meet twice a week on Tuesday and Thursday. Between the two classes, Matthews practices 10 hours per week.

For $350 a semester, students have set practice times with access to equipment for the three disciplines of fencing; foil, epee and sabre. Along with Matthews, two other fencing masters instruct the variety of disciplines.

Epee student Isaac Manly is a senior at Oxford High School. He said fencing has made him stronger and has developed his reflexes.

He has been working with “Doc,” (what most students call Matthews) for several years. He said, although some people do not consider fencing a real sport, it is physically and mentally demanding.

“There’s a lot more thinking in fencing than other sports,” Manly said.

Manly likes to develop his sparring skills when he is not busy with swim team practice. He intends to continue fencing when he enrolls in college.

With many students like Manly sharing their passion for fencing, Matthews has done his fair share of recruiting for the sport.

His most recent endeavor is an attempt to bring the hobby to more students. Matthews is thinking of become accredited within the public school systems in order to teach fencing for a physical education credit.

For him that means going back to school temporarily to become certified. Matthews said he is up for the challenge if it  he can teach more students.