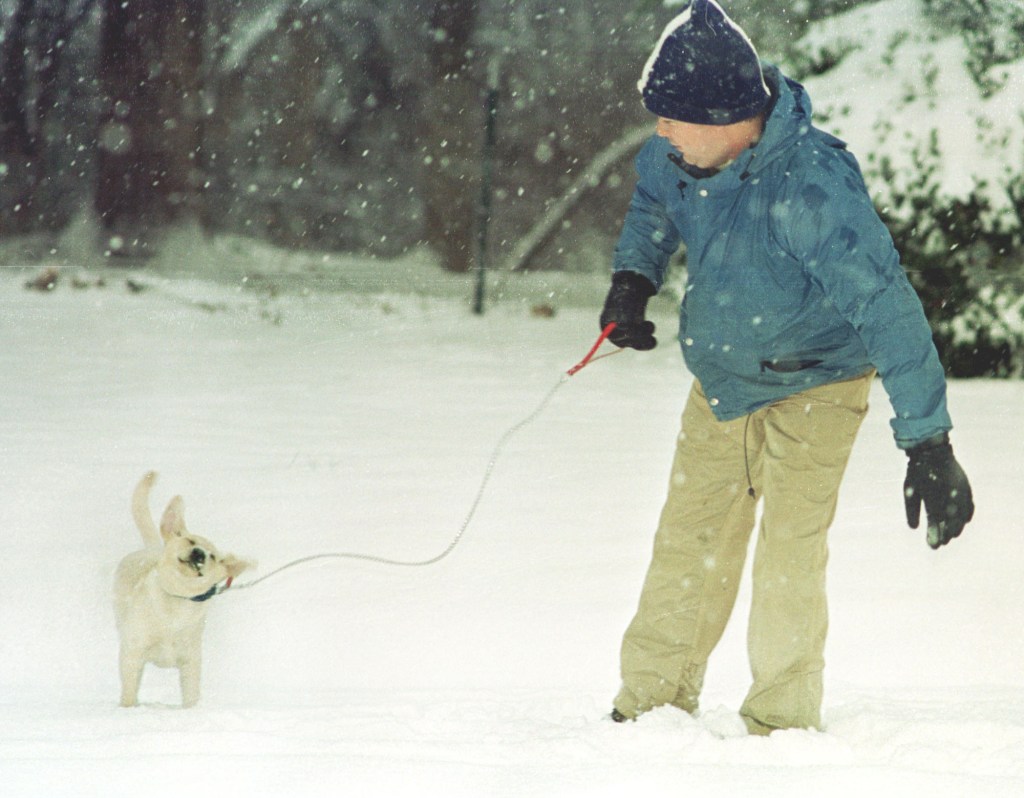 Gary Bridgman's dog Birdy shakes off some snow as they get out and play in it in Oxford, Miss. Friday, January 28, 2000. About six inches of snow fell on Oxford beginning at 8 p.m. Thursday. (AP Photo/Bruce Newman, Oxford EAGLE)

In yesterday’s papers for this week in January, a fallen hero was remembered, sports were a focus, winter weather made its mark, a new chancellor search was on and a Soviet couple visiting showed Oxonians what they had to be thankful for. See these excerpts from 2010, 2005, 2000, 1995 and 1990.

A historical marker on the grounds of the Lafayette County Courthouse lists the names of Oxford residents who died serving their country during war.

On Wednesday a new marker was placed next to the old one in memory of U.S. Army Lt. Donald “Donnie” Carwile, who died in August 2008 when an IED struck during a routine patrol in Afghanistan. He was 29.

Waller Funeral Home and B & W Memorials donated the square, granite block which was placed next to a bronze plaque at the courthouse.

A former city attorney and supporters from both the Oxford Park Commission and the Lafayette Youth Athletics Association have been appointed to lead the development of a new city-county sports complex.

The six-member board begins work next week and they’ll learn the ropes at the informal “council of governments” quarterly meeting among the city, county and university.

The winter weather everyone was preparing for hit Oxford and Lafayette County, dumping roughly 4 to 6 inches of snow.

No problems included no power outages and no major accidents.

Road crews were out preparing for more snow and children were sledding away.

Turner said he anticipates leaving campus between April and July.

Mississippi  Commissioner of Institutions of Higher Learning Ray Cleere said a search committee will be appointed to find a new Ole Miss chancellor.

Turner, 49, was the one and only candidate of more than 150 nominees to be interviewed for the SMU job.

A young Russian couple, stopping in Oxford for three days during a six-week “discovering” America trip, said it seems to be a nation of friendly people who have an easy life.

“Only in America,” Sveta Krasovsky said, referring to her husband, Arkady, meeting Oxford Mayor John Leslie. “In Russia something like that would be impossible. That was so interesting, being able to talk with the mayor.”

The couple will stay with Oxford hosts Bob and Carol Dorsey and visit the Oxford sites like the University of Mississippi, Rowan Oak and more.