Dixon cooks for others 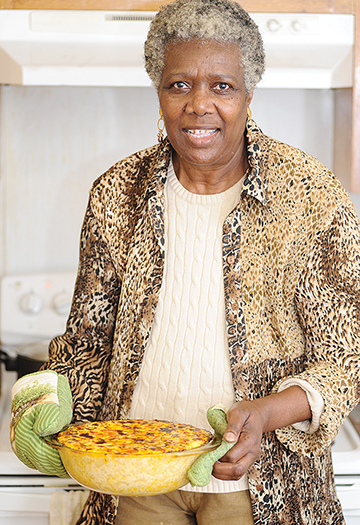 Dorothy Dixon always makes sure her family, friends and the elderly at church have good food.

The 68-year-old Oxford native and retiree spends her time volunteering and taking care of her family, and in the meantime has developed a reputation for being a good cook, a skill she picked up from watching her mom while growing up and later honed while living in the Mississippi Delta and working for Mississippi Valley State University in Leflore County.

“I don’t mind cooking,” she said humbly. “I cook because I have to, but I make the best of it. If somebody called and said, ‘would you do this,’ I’d say yes. But on a daily regular basis I don’t do cooking.”

So when she cooks for friends in the hospital or the elderly at East Saint Peter Missionary Baptist Church, it’s something special.

“We have a senior citizen ministry where every second Thursday of each month we have a fellowship and we prepare food and we serve home- cooked hot meals,” Dixon said. “Prior to this year I was coordinating the kitchen, the foods.”

That coordination, her business acumen and talent in the kitchen came in handy as president of the Lafayette County Homemakers club the past six years.

“We host a lot of events where we serve food,” she said. “I’m not an instant cooker. I cook from scratch. I come from the old school — soul food, that’s my thing. I don’t do a lot of sandwiches, snacks, kind of thing. I cook food, real food.”

In addition to a meal for public officials every June, the club participates in a wildlife event annually and comes together once a month with its overall council and serves a different type of food.

Sometimes Dixon gets requests for the events.

“Just about anything that I cook” is what people ask for, she said, but one of her more popular requests is her baked chicken because of her love for spice.

“I season it overnight or I give it time to set awhile before I bake it,” she said. “I always season my meat. I use a lot of hickory smoke. I put that in my vegetables, my meats. Curry powder gives it a real good taste and flavor.

“I use a lot of garlic, onion, spices and herbs in everything that I cook. Celery and bell pepper are in just about every meat that I cook. “I always tell people when they ask what I put on it — everything in the cabinet.”

That spice comes in handy with another delicacy people request: turnip bottoms.

“I learned how to do those when I was in the Delta,” she said. “The people eat them down there. It’s a delicacy for them there because it’s a specialty side dish. Or they take them and eat them by themselves.”

Some of Dixon’s favorite foods to cook are macaroni and cheese, candied yams, liver and rice, chicken gizzards, pork roasts and on special occasions: a caramel cake.

Half of her fun from cook- ing is experimenting.

“I’ll look at a recipe and I’ll spice it up and do something different to it,” she said. For example, by adding some leftover coconut into a pie or adding some nuts from the pantry into a dessert.

“I don’t waste anything,” she said.

Dixon doesn’t get to always eat or even sample what she creates in the kitchen. In 2003, she was diagnosed with colorectal cancer, so after surgery and treatment she has to watch her diet.

“A lot of foods that I really love are against my health, but I still prepare it for everybody else,” she said. “I like cooking, it’s just something that I don’t commit to every day. I cook when I have to because I need to. I try to stay healthy and eat the right food the majority of the time.”

She’s been back in Oxford full time since 2005 and has immersed herself in the community since 2007, whether its attending Leisure Lifestyles or other nonprofits. “I got back on my feet and got involved with RSVP and then the Lafayette County Homemakers and volunteered,” she said. “The last couple of years I worked with the Doors of Hope Summer Bounty and the senior citizen ministry at church. I do a lot for the church elders.”

Now that her term ended as president with the homemakers, she’s on to her next challenge: quilting.

“It’s something that I want to do. I’ve made an attempt and have everything but the patience,” she joked.

The race is on!