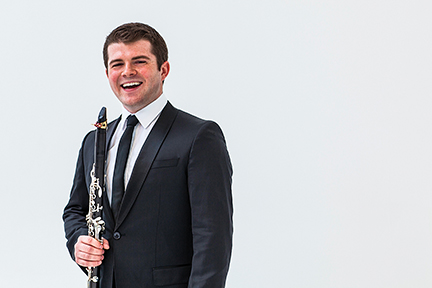 The Julian Bliss Septet has a Feb. 4 performance scheduled at the Ford Center.

That recording would go on to have enormous influence on Bliss’ musical career. In the liner notes to his 2012 album “A Tribute to Benny Goodman,” Bliss writes: “As a classical clarinetist in the making — learning the ins and outs of stage etiquette and composure — I couldn’t help but stare at that man on the front cover, reeling back, clarinet in the air, grin on his face, breaking all the rules.”

Bliss leads a sextet of fellow Goodman enthusiasts in a program of swing tunes by Goodman and other luminaries of the era at the University of Mississippi’s Ford Center for the Performing Arts on Thursday, Feb. 4, at 7:30 p.m.

To create the arrangements for the recording and program, Bliss teamed up with pianist Neal Thornton, who had been similarly drawn to Goodman as a young student. The two listened to hundreds of tracks of Goodman and others performing the great music of their time, marveling at their virtuosity and ensemble playing.

Bliss and Thornton ultimately selected a range of tunes representing both the classic Goodman sextet lineup and the big band tradition, and put together a band that included drums, bass, guitar, vibes and trumpet, in addition to clarinet and piano.

Within weeks after coming together, the Julian Bliss Septet was working on “A Tribute To Benny Goodman,” which was released on Signum Records in 2012 to critical acclaim from both jazz and classical critics; JazzTimes declared that “Bliss is capable of swinging mightily and adapting his formidable technique to the task at hand.”