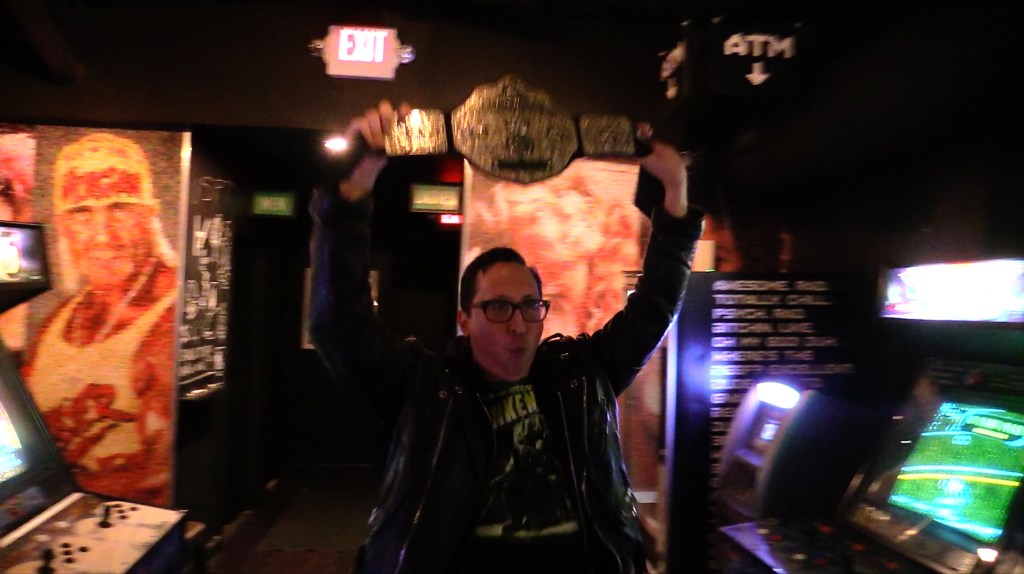 Daniel Lee Perea may not be the biggest guy in the world, but that didn’t stop him from winning a World Wrestling Federation championship recently.

In a retro bar in Columbus, Ohio, last week, Perea became the high score record holder for Most Opponents Beaten in Royal Rumble in the arcade game WWF Wrestlefest, breaking the current record of six with a score of seven.

Twin Galaxies tracks high scores on video games and is a Guinness World Records partner that supplies information on numerous records and statistics for the yearly “Guinness World Records: Gamer’s Edition” books. Perea is listed in the 2010, 2012 and 2016 books for NBA Jam and Super WrestleMania records.

“I hold, at time of press, 76 world records on TwinGalaxies.com including high scores for Tecmo Super Bowl, Golden Axe and Super Nintendo Port of Joust,” Perea said. “Funny enough, one of the current real life WWE World Tag Team Champions, Xavier Woods, was in a 16-bit bar a week earlier. He’s an avid gamer and after I posted a picture on Twitter suggesting he should play against me in NBA Jam, he actually started trash-talking me on Twitter and agreed to play me the next time we’re both in the same town.”

When trying to win a world record at home on a console game, like Super Nintendo, Sega and Wii, Perea has to record himself playing and then send the video to Twin Galaxies for review.

“I’ve never attempted to break a record on an arcade machine until now,” he said.

Perea said he would have attempted breaking the record at home in Mississippi, however it is lacking in arcades and Ohio has at least five arcade bars.

“I’m a native Buckeye, so if it can’t be in Mississippi, it might as well be Ohio,” he said.

Perea’s job with Pizza TV takes him to Columbus often where he discovered the 16-Bit Bar & Arcade, and decided it was the perfect place to attempt to break a new record.

“I contacted their experience manager and asked if they would be interested in a world record attempt at one of their locations,” Perea said. “They were excited about the idea and we just set up what the process would be, and what day and time I would come in.”

The bar pledged a donation to the Ronald McDonald House if Perea won.

Playing as a kid

Perea started playing WWF Wrestlefest as a kid in the now-defunct Aladdin’s Castle arcade in Florence, Alabama, when it first came out in 1991. WWF Wrestlefest has only existed as an arcade machine and was never made for a console. However, thanks to emulators online, Perea was able to practice at home.

“Before I started seriously practicing for this attempt with an emulator, I hadn’t really played it since I was a kid,” he said.

Perea isn’t the kind of person lacking things to do. He makes movies, is a popular rockabilly musician and an actor — but one of his first loves is playing video games.

“Realistically, I’m probably never going to win an Oscar or a Grammy for film or music. But with my gaming, I’ve achieved Guinness World Records. That’s pretty cool. Besides, I’m a lifelong wrestling fan and throwing a title belt over my shoulder, and walking around pretending to be Ric Flair is a fun weekend diversion and good conversation starter. And apparently will get you a free drink or two.”