Gay Graeber: From teaching to drawing 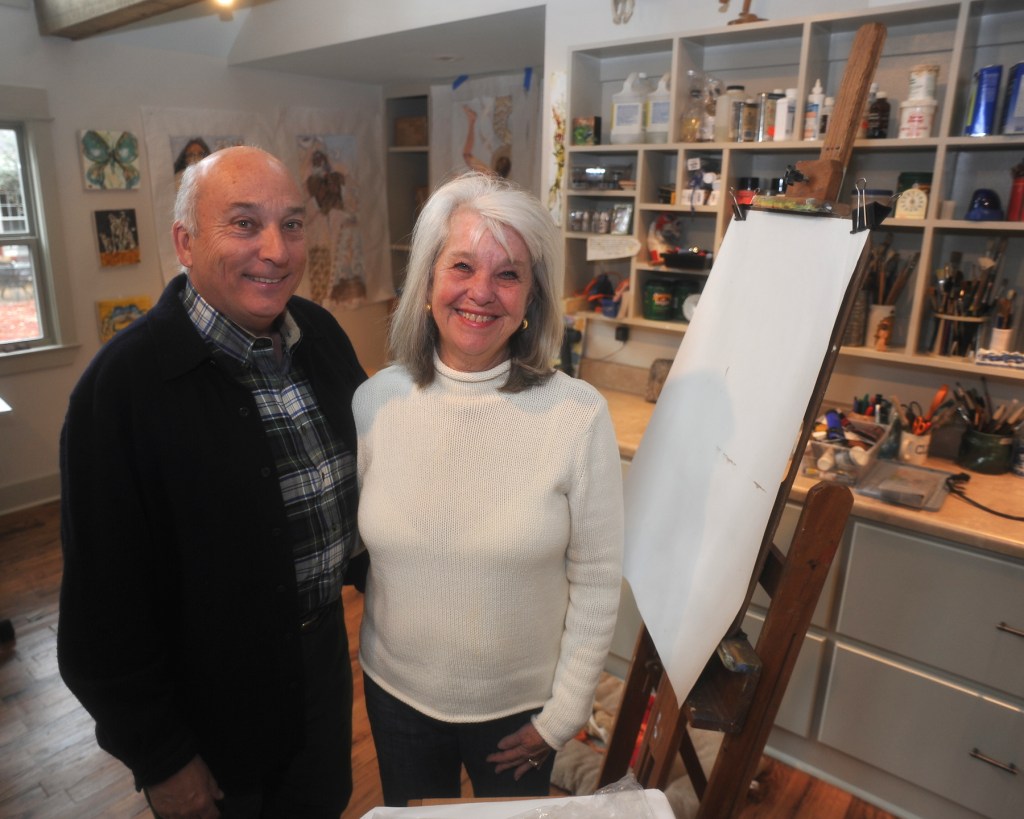 It all started with the words Machu Picchu.

Jack Stubbs discussed the historic and beautiful site in Peru while in Oxford’s Burgandy Room in 1999. It caught Gay Graeber’s ear.

Four and a half years later they were married.

Now in 2016, they have traveled to all seven continents and more than 170 countries together and live what they call blessed lives.

Jack, 67, grew up in Holly Springs and Gay, 68, in Marks. They both attended the University of Mississippi before heading their separate ways. She went into teaching gifted children in Kentucky, Indiana and Memphis. He worked for the Social Security Administration and also ran an antique store and a bed and breakfast.

Gay had moved back to Oxford in plenty of time for the 1999 wedding that led guests to the Burgandy Room. She returned to teach in 1995, but her main focus was getting back to painting, so she bought a home on Buchanan Avenue because it had a studio in the back.

“I wanted to get back in my art, which is just my soul. In the back there was a shack and it was probably 80, 90 years old,” she said. She tore it down about a year ago and rebuilt it.

And inside the home where the couple moved into is art Gay has created during and after their travels around the world.

Jack jokes that Gay’s interest peaked that hot night in ’99 when she heard he was in the travel business.

“We went on a couple dates and she found out I was in the travel business and I think that’s when she said I want to go out with him,” he said. “I said I was going to Peru in March and she said, ‘Oh I’ve never been to Peru and always wanted to go.’”

But Gay is firm that it’s the two words he said that really caught her attention.

“He said the word Machu Picchu and most people do not know what Machu Picchu was and that made me say, maybe I need to have a conversation with this man,” she said. “And, really, if he hadn’t said that I don’t know if I’d have paid him that much attention. I had traveled a lot and been in South America and I had been studying biodiversity in Ecuador so I knew a lot of the world. I loved to travel too.”

She said Oxford was a different world before it grew in the past decade and for someone to be well-traveled, it was something.

“This was 20 years ago in a bar and Oxford was much smaller and it didn’t have the influx of people from different parts of the world that had been exposed to different things,” she said.

They have four children between the two of them, and they all wanted the couple to marry — to the point of throwing them in the path of at least one bouquet at a wedding.

Jack was talking in the bar about his travel consultant work with Gulliver’s Travels out of Memphis.

“A friend of mine said you need to go into traveling,” he said. “She said, ‘you like traveling,’ so she suggested it be something I do when I retired. I didn’t know it was going to turn into a business 25 years ago.”

He first got the travel bug when he organized a spring break trip for college students and their parents in 1996 to visit Beijing and The Great Wall of China.

“All their friends were going to Florida or Mexico or something and they really didn’t believe that they were actually going to China. But they did,” he said. “So I started a spring break trip. The next year we went to Italy and then we went to Morocco and Egypt and Iceland and all of South America, Spain, all over the world during spring break trips. Some of the parents said, ‘I want to go to Greece,’ so I said, ‘Let’s go to Greece.’ So it just kind of snowballed from 1996 to the last 22 years. So I usually take about three to four groups a year on a trip.”

This year Jack’s trips with groups include Panama, Nicaragua and Columbia in March. June will bring in a sailboat cruise from Athens to Rome. In September the pair will take a group of excited Oxford residents to Oxford, England, for a Downton Abbey event. November is a visit to see polar bears in Manitoba and Churchill.

“That’s what we do and we have the best time doing it,” Gay said. “Jack is an amazing person to gather people together and getting them seeing and being enthusiastic about all different parts of the world.”

“We’ve just been very blessed with our lives to be able to travel and do what we’ve done,” he said. “I think there’s 175 countries that we’ve been to. That’s a lot of traveling.”

Gay snaps photos at every turn on African safaris, or while dining in Italy, she creates a quick watercolor. She then brings her work home and uses it to create bodies of art.

An African safari is the couple’s favorite destination choice and has resulted in several photo books from the trip, which the couple gives to people who went with them. The photos also wind up in Gay’s art. Her last art show was in 2011 of paintings from Africa.

“We’ve done six safaris,” Jack said. “We’ve been to Africa eight or nine times, but it’s been six photo safaris. I have people that say, ‘I don’t want to go to Africa, I’ll just watch it on Animal Planet,’ but it’s not the same. Once people go it gets in their blood and they want to go back.”

She gets the luck of the draw and sits up front with the safari driver each time.

“I used to go crazy with pictures, but you can only take so many hundreds of pictures of elephants,” she said. “I sit with the driver and he lets me put my junk everywhere and he’ll be so fascinated that I’m painting that I get the best seat. They’re quick sketches, but it’s really amazing to be able to do that, to be able to be in the animal’s environment.”

Gay worked quick too while in Antarctica and had a once-in-a-lifetime experience with penguins while painting.

“When we got on the islands you were not allowed to get close to the animals, and there were thousands and thousands of them,” she said. “Of course, I’m going to sit and paint. So I sat down and had my little paints out. I was dressed in five layers of clothes, sitting on the ice and the penguins came and started pecking at my paint and pecking at my toes. It was probably one of the best experiences I’ve ever had. It was breathtaking.”

She paints fast also while overlooking a river or scenic masterpiece while at dinner in Tuscany, France or Spain.

The watercolor books get packed up in the suitcase and make their way back to her studio.

“When we come home I will look at these and look at my photographs and I will put paintings together,” she said. “Sometimes watercolors have more information in them than a photograph will.”

When in the studio

One of Gay’s favorite art mediums when she returns home is encaustic, which means melted wax. It’s Greek for “to burn” and it’s something she discovered fully while traveling in Egypt.

“It’s an ancient art that was done in Egypt 5,000 years ago, and the first time we were in Egypt when I saw the originals that looked like they were done yesterday, that inspired me,” she said. “Most encaustic painters are abstract because it’s hard to control. It moves. And you can carve into it also.”

Equipment to create the art heats up to 200 degrees and it is fused with a torch or heat gun. Each color gets it own brush.

“The Egyptians used to draw pictures of the dead person, they’d do mummies and King Tut had that gold mask,” Gay said. “Well, the middle class wanted to be remembered too so they got them to paint on wood with wax, so it was a funery kind of a process. It’s a great new, happy medium.”

Her next project is in the works right now: a panel of the patriarchs of the Old Testament: Moses, Joseph, Abraham, Jacob and Noah.

She has them on paper, but they will eventually be on panels and created with oil and gold leaf. She also will use her own animal photographs from travels for the Noah’s Ark panel.

“I hope they will be done and finished by spring,” she said.

When complete, she shows her work at her son’s restaurant, Ravine.

Gay feels at home when they are in Italy and cries when they have to leave Africa. But the couple has memories, art and more they bring home with them from their travels.

They have been honored to bring Jewish friends to Poland and to bring a friend to Morocco where he used to be a harbor master.

They have been tickled to watch a Vietnam water puppet show and bring a puppet home. They have been proud to support artists creating pieces on the streets of San Miguel by forking over some cash and displaying that work on their mantel. They have been excited to bring home a steal by purchasing curtains in Thailand.

“Our kids say they are going to have the biggest garage sale when we go,” Jack said. “It’s an eclectic mix of stuff from all over the world.”

Folk and pop art are influences for Jason Heavner