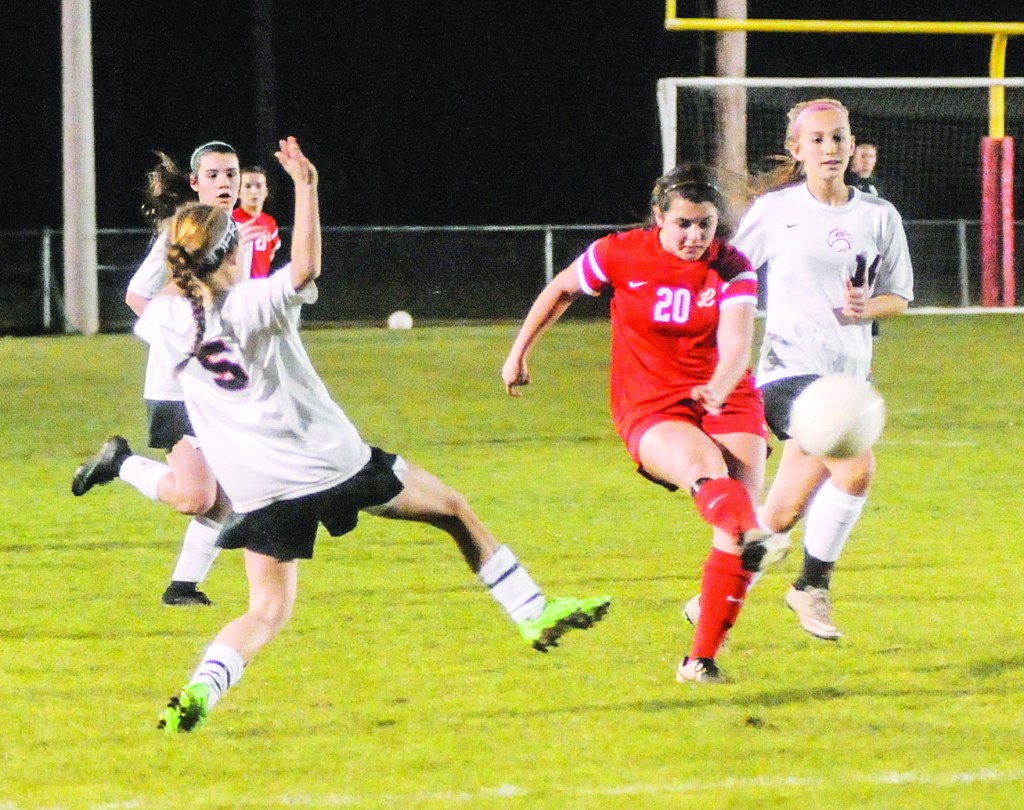 Lafayette's Maddy Houghton takes a shot against Florence defender Kaitlynn Summerlin (5) during their MSHAA Class 4A second round match at Florence High School on Friday. The Commodores won 3-2.

Replace the day with night, and it was like watching last year’s second-round encounter on DVR.

The script was followed exactly the same with the Commodores edging out Florence 3-2, punching their ticket to the 4A North Half title match Tuesday. It was the second time in as many seasons Lafayette (18-2) has ended the Eagles’ season on their home field in the second round. Even the score was the same.

“I think I’m in shock, the same thing as last year,” Lafayette coach Melinda Scruggs said after the game. “These girls, if nothing else, they have guts. They didn’t give up. I don’t think that was our best game I’ve seen us play, but they also don’t quit.”

The potential for the match to become a high-scoring affair was there on paper with two of the top players in the state in Lafayette’s Alley Houghton and Florence’s Ashley Langham facing off against each other.

They did not disappoint once the whistle blew as both teams traded body blows early, scoring goals in the first 12 minutes.

Houghton and the Commodores drew first blood when she received a lob pass from her sister, Maddy, and chipped it over the Florence goalkeeper for the early 1-0 advantage in the ninth minute.
It was a short-lived lead as Langham worked her way in front of the net and leveled the match at 1-1 three minutes later.

After the early fireworks, things settled down and defense took over during the middle portion of the first half as both teams had scoring opportunities but could not cash in.

Houghton broke the tie once again, driving through the Florence defense single-handedly and untouched from nearly midfield to put the ball in the back of the net for a 2-1 lead in the 28th minute.
The Lafayette goal seemed to awaken the Eagles’ offense once more as Macey Spencer knotted the match six minutes later for a 2-2 score at halftime.

Let’s get physical
It was a playoff atmosphere and the referees were letting it play out as such, swallowing their whistle for most of the night. It allowed Lafayette and Florence to be a little more physical than maybe they would have been in a regular-season match.

This tested the Commodores, especially in the second half where Florence was on the offensive and keeping constant pressure.

“It’s hard during our season, we don’t play teams that are like (Florence),” Scruggs said. “They are very good.  … It’s so much fun to play them because it’s such a great competition. At no point did I say we had this in the bag. Down to the last second, all of us were making sure we were taking care of things.”

The only cards handed out were yellow cards for each team to Lafayette’s Emma Wilson and Florence’s Caseigh Hickman with nine minutes left in the match.

The prospect of overtime was looming as the clock was ticking away during regulation.

Maddy Houghton wanted to make sure her team was going home happy when the final whistle blew. She had been close to scoring on a couple previous corner kicks, but a free kick awarded to Lafayette 10 to 15 yards from the goal is where she found paydirt.

Houghton dropped the ball just past the outstretched hands of the Florence goalie and into the far side of the net to give Lafayette the winning margin with five minutes left.

“I just knew when I got that chance, I needed to place it in the right spot and I did,” Maddy said. “I’ve taken those before, and I just knew that if I could put enough curve on it, I could get it in there.”

It will be another rematch for Lafayette as the Commodores host Richland for the right to advance to the 4A state championship match for the second year in a row. Richland defeated New Albany 4-0 on Saturday.

ONE MORE SHOT: Chargers get chance at revenge against…