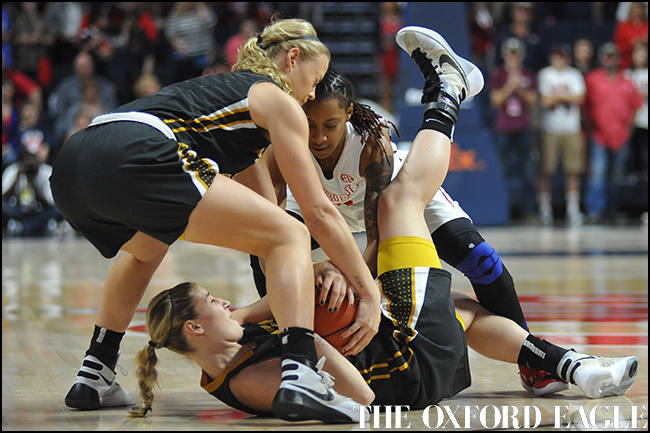 January is over for the Ole Miss women’s basketball team, and it could not come at a better time.

The Rebels finished their five-game stretch against top-25 opponents with a 60-46 loss at the hands of No. 22 Missouri at the Pavilion on Sunday afternoon.

It was a game where points were at a premium and turnovers were aplenty, but Missouri used a key third-quarter surge to pull out the win.

The only problem for Ole Miss (10-11, 2-6 Southeastern Conference) was it could not cash in Missouri’s free gifts on the offensive end of the floor. The first half saw a combined 37 points from both teams with seven of them in the second quarter. The Rebels went on a near six-minute scoring drought in the second period while Missouri (18-4, 5-4) could not hit the basket for more than seven minutes.

The cold offense did not last long for one team as Missouri outscored the Rebels 25-15 in the third quarter. Junior guard Sierra Michaelis did most of the work, hitting four 3-pointers coming out of the break. She had two points in the first half but finished with a game-high 20 points. Jordan Frericks scored 17 points while freshman Sophie Cunningham added 10 points.

“We had no help on (Michaelis),” Insell said. “We had no help on her side. To beat Missouri, you have to guard the basketball. You can’t force help. They like to drive the ball and kick. We were still able to weather (the third quarter), but we just couldn’t get the shot after that to break through.”

The third-quarter run by Missouri was too much for the Rebels to overcome as they were not able to get any closer than seven points the remainder of the game. Ole Miss shot 16 of 66 (24.2 percent) from the field and 5 of 34 (14.7) from 3-point range.

Shandricka Sessom followed up her 26-point performance at South Carolina with a team-high 15 points along with A’Queen Hayes’ 15 points. Shequila Joseph hit three 3-pointers on her way to adding 10 points.

Ole Miss returns to action on Thursday when the Rebels travel to Alabama (6 p.m., SEC Network+).