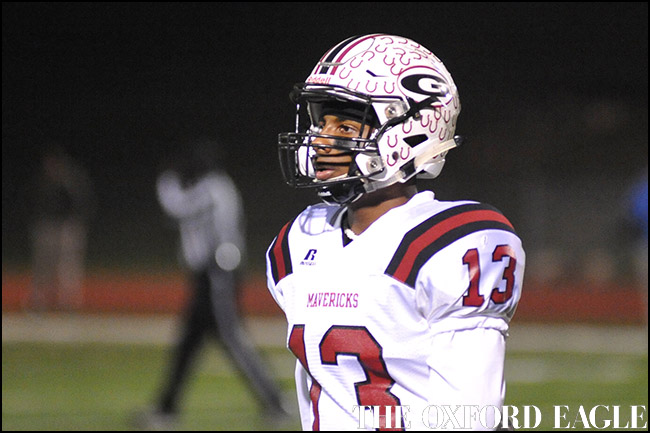 Oxford High vs. Germantown in MHSAA Class 5A playoffs at Bobby Holcomb Field in Oxford, Miss. on Friday, November 20, 2015.

Today’s is Nigel Knott’s birthday, and as of Sunday morning, the highly recruited cornerback prospect out of Madison’s Germantown High was planning to celebrate it with a decision on where he would play his college football, his mother, Sabrina Givens, said.

Knott, ranked as a four-star recruit by every major recruiting service, took his final official visit before national signing day to Ole Miss over the weekend and may announce the winner among a group of finalists that includes Ole Miss, Mississippi State, Alabama and Oregon today.

“I don’t know where it’s going to be,” said Givens, who accompanied Knott on his visit to Oxford. “I know he said it was going to be at 1:30, and I’m thinking it might be at the school. I’m not for sure.”

Oregon is a distant fourth in the pecking order for the 5-foot-11, 175-pound Knott, Givens said, because “it’s too far, and he knows that we’re all close, a family,” leaving the state’s top-ranked cornerback prospect to likely choose between continuing his career in his home state or Alabama. Knott has family connections to all three schools.

“I’m thinking right now, he’s really torn between those three because he’s got family at (Mississippi) State, which is his sister. I went there for a little while also,” Givens said. “His dad played here, his (godfather) played here, I went here (for undergraduate studies), and he was born here, so he feels like he’s got ties here. My mom’s cousin played at Alabama, and his dad is in Alabama.”

More than football
Knott preceded the visit to Ole Miss with trips to Mississippi State and Alabama, and Givens said it was her opinion that the visits to the three schools “were all the same to him.” Knott’s decision, she said, will likely come down to which school he feels most comfortable at both athletically and academically.

“I told him he needs to look and see his major,” Givens said. “He’s going to major in finance and minor in communications or vice versa. He needs to see which (school) is going to put him out there the most and help him. I told him we can’t base everything on a relationship with a coach because they’re either getting fired, retiring or going on to something better.”

Givens said she’ll support whatever decision her son makes as long as it keeps him close to home, adding that his decision, whenever it’s actually made, will be final.

Said Givens, “I told him I’m content as long as it’s one of the three (Ole Miss, Mississippi State or Alabama).”

Knott is ranked as one of the nation’s top 100 recruits by Rivals.com, 247Sports.com and ESPN. Scout.com ranks him as the 196th overall prospect nationally.
He’s ranked as high as the fifth cornerback nationally by Rivals and ESPN.