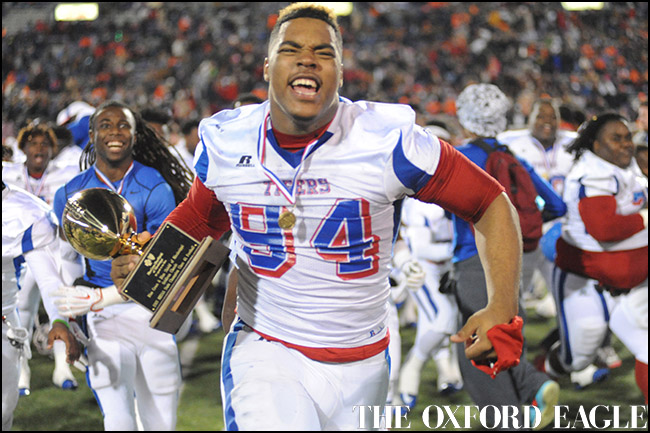 Noxubee County's Jeffery Simmons (94) runs with the championship trophy towards his team's fans following a 44-23 win against St. Stanislaus in the MHSAA Class 4A championship football game at Vaught-Hemingway in Oxford, Miss. on Saturday, December 5, 2015. (AP Photo/Oxford Eagle, Bruce Newman)

Jeffery Simmons admitted he has an idea of which school he’ll be signing with Wednesday, but there are still two days until Noxubee County’s star defensive end will be able to put pen to paper and make it official.

Simmons said he’ll spend that time talking things over with his coaches and his family to make sure he’s comfortable with the direction he’s leaning.

“I’m close (to a decision) because signing day is Wednesday,” Simmons said Sunday. “I’ll talk to my coach tonight and tomorrow. By Tuesday, I should finalize everything.”

Simmons took his final official visit to Ole Miss over the weekend as the Rebels got the last shot to impress the state’s top prospect as ranked by three of the major recruiting services. Simmons, a five-star prospect ranked as the nation’s top strong-side defensive end by Rivals.com, also visited Mississippi State and Alabama last month and said Tennessee rounds out his group of finalists heading into national signing day.

Should he have his final decision made by Tuesday night, Simmons said he will keep it private and wait to announce it at a ceremony at his high school Wednesday.

“It’s me,” Simmons said. “I know where I feel right now a little bit at home at, but that’s what these next few days are for.”

Simmons was hosted on his visit by freshman defensive tackle Benito Jones, someone Simmons said he’s known “for a good little while” while participating in camps and all-star games together.

Like most of his visits, Simmons said his weekend trip to Oxford was an enjoyable experience.

Fit, not pressure, Brown’s focus
Arthur Brown knows there will be some backlash if his son, Starkville star wideout A.J. Brown, signs with Ole Miss or Alabama on Wednesday, but he insisted it’s not going to keep A.J. from making a decision that best fits him.

The popular belief has always been that the state’s top-ranked receiver would stay home and eventually sign with Mississippi State. The 6-foot-2, 220-pound Brown has visited the school numerous times and has also tripped to Alabama, Cal, and, most recently, Ole Miss.

“It’s no pressure or anything like that,” Arthur said. “It’s going to be difficult or whatever you would say, but other than that, I don’t know. Just thinking about what’s best for A.J.

“People are going to say things regardless of where you go. That lasts maybe two or three days or whatever, but as a whole, there’s good people in Mississippi as well as pretty much anywhere. It would probably be difficult or whatever, but Mississippi State is not out of the race though.”

Pennamon still thinking
Manvel (Texas) running back D’Vaughn Pennamon has been verbally committed to Ole Miss since the summer, but the consensus four-star prospect said he is still weighing offers from other schools that haven’t given up just yet.

Pennamon took his official visit to Ole Miss this past weekend, but the Rebels are trying to fend off last-minute pushes from Texas A&M and Alabama, schools he also visited last month.

Pennamon said both are coming after him “extremely hard” and that he’ll announce a final decision today on social media after talking things over with his parents.

“I’ll probably do it on Twitter because it’s where everybody pays attention to social media,” Pennamon said. “That’s where it will be at.”

What will be the deciding factors?

Jones turns into recruiter
Allen (Texas) four-star cornerback Jaylon Jones has no doubts about his commitment and spent the weekend working on some of Ole Miss’ top targets.

“I’m still 100 percent committed to Ole Miss,” Jones said. “I did some recruiting myself, and we’re definitely going to finish with a top-5 recruiting class.”

Getting fellow Texan and commit Greg Little, the nation’s top-ranked offensive lineman, back on campus this weekend didn’t hurt either, Jones said.

“We’ve got (Little) 100 percent still. I’m still in his ear no matter what,” Jones said. “I’ve stayed in (Anderson’s) ear, too, because I want to play with Deontay. Me and him, we had some fun at The Opening. I think we’ve got him maybe.”