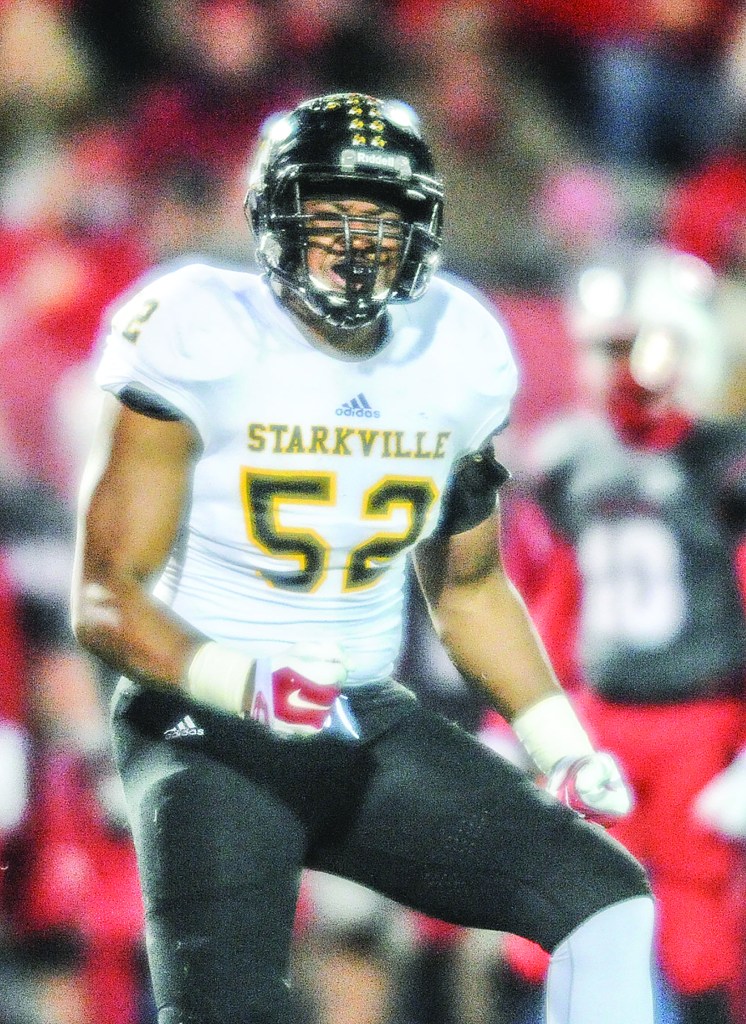 Ole Miss is in the mix for two recruits from Starkville, including defensive lineman Kobe Jones (52). How Ole Miss does in its rival's backyard is something to watch Wednesday. (Bruce Newman)

It may be hard to believe, but Ole Miss is working on a signing class that could end up being even better than that one the Rebels assembled in 2013 (at least according to stars and rankings and all that stuff used to evaluate high school players before they ever step foot on a college campus).

The Rebels currently have 22 players in this year’s class, eight of which are already enrolled in classes. Hugh Freeze and his staff have their collective eyes on a select group of prospects they’re hoping to add to it by the time Wednesday, better known around these parts as national signing day, comes to an end. Ole Miss’ class is currently ranked in the top 4 nationally by every major recruiting service.

So what are the biggest questions as the Rebels’ coaching staff and fans head into the final hours before the prospects out there who are still undecided make one set of coaches and fans extremely happy Wednesday and all the rest just plain bitter?

Here’s what to watch for:

How many of state’s big fish will be caught?
According to 247Sports.com’s composite rankings, Ole Miss has commitments from five of the state’s top 14 prospects, but the Rebels have a real chance to end up with at least half.

The biggest catch of all of them would be Noxubee County’s Jeffery Simmons, who’s ranked as Mississippi’s top recruit by multiple recruiting services. Ole Miss likes its position with the five-star defensive end and could be the team to beat heading into Wednesday, though Alabama, Mississippi State and Tennessee are still involved as well.

I continue to hear that Ole Miss is in a good position to pluck wideout A.J. Brown out of Starkville. The Rebels lost out on Germantown cornerback Nigel Knott, who visited Ole Miss over the weekend but announced his intention to sign with Alabama on Monday.

Ole Miss had the last chance to make a positive impression in person with Simmons and Brown with both on campus over the weekend for their final official visits.

Is taking two from enemy territory possible?
Ole Miss going into Mississippi State’s backyard and pulling out both of Starkville’s prized prospects is possible, but it’s highly unlikely.

The Rebels have done about as good of a job as a rival school can do to put itself in position to pull off what many would consider a surprise and sign the aforementioned Brown, the state’s top-ranked wideout. Ole Miss has also been working on defensive lineman Kobe Jones, who also visited Oxford over the weekend.

Jones seems to be all over the map — he took visits to MSU, Alabama, Miami, Missouri and Ole Miss all in the last two weeks — and didn’t do any interviews as he left Ole Miss’ campus Sunday, but it’ll be hard for anybody to get the 6-foot-4, 270-pound defensive tackle out of Starkville.

Maybe Ole Miss is able to snag one. I’d be shocked if the Rebels get both. But the fact they’re as much of a factor for either one this close to signing day is a testament to the staff’s recruiting prowess.

Quick spoiler though: Not all of them are going to choose Ole Miss.

Brown and Mykel Jones play the same position, meaning if one chooses Ole Miss, the other is likely headed elsewhere. And while Jones never officially visited Ole Miss, some close to the program feel Jones would still have a spot in the class if he wanted it should the Rebels miss out on Brown.

Ole Miss is heavily in the mix for Kongbo, the nation’s top junior college prospect, while the Rebels would also likely take a third tight end in this class in Mathis if he wanted to sign because he could possibly play other positions.

But remember, these recruits are deciding between a lot more than two schools. There’s no guarantee Ole Miss ends up with any of them.

How will the numbers shake out?
The Rebels can’t sign all of their remaining targets even if they all wanted to come to Ole Miss because the numbers are tight.

The Southeastern Conference only allows its schools to sign 25 in a class, but the Rebels would be able to sign a few more and count some of those scholarships back to last year’s class since they only signed 22 a year ago.

The exact math can get convoluted with some scholarships freeing up with departures (graduation, NFL Draft, dismissals), but look for Ole Miss to sign anywhere from 27 to 28 players in this class while staying under the NCAA limit of 85 scholarships for the entire team.