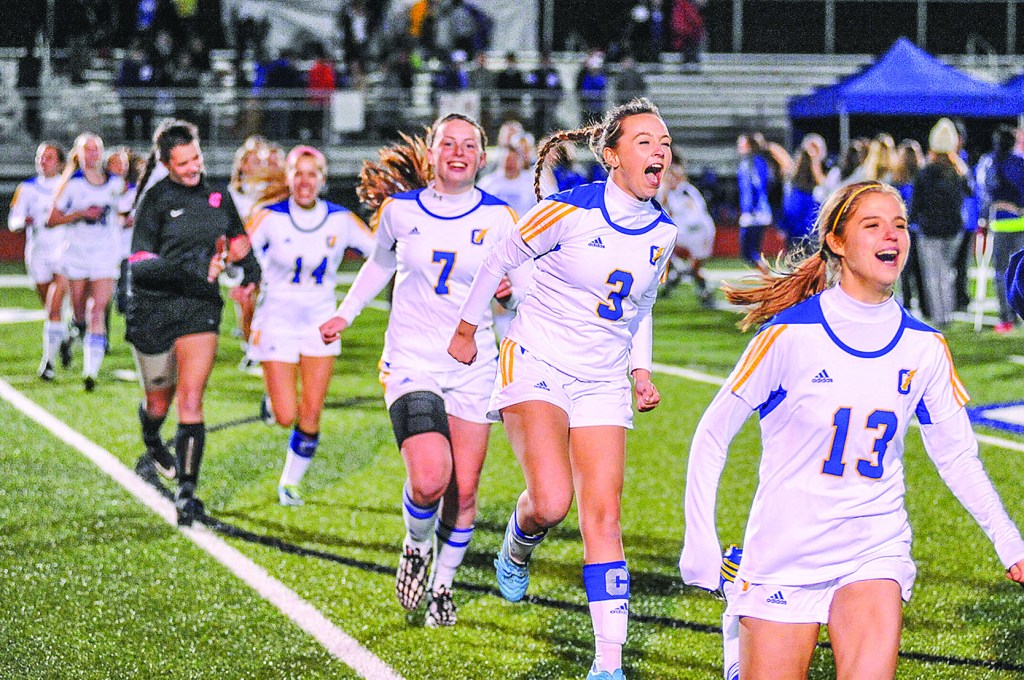 Oxford High's Sarah Valentine (13), Zoe Scruggs (3), and Grace Joyce (7) celebrate the team's win over Saltillo in the MHSAA Class 5A North Half playoffs in Oxford, Miss. on Wednesday, February 3, 2016. Oxford won 6-0 to advance to the state championship.

Wednesday night was historic in more ways than one for Oxford’s girls soccer team.

Morgan O’Connor moved to the top of the Chargers’ single-season scoring list to highlight a late offensive barrage, helping Oxford make sure it plays for it all this time. Ally Shinall added a pair of goals as Oxford clinched its spot in the MHSAA Class 5A championship match with a 6-0 win over Saltillo at Bobby Holcomb Field.

“How sweet can that be right there?” Oxford first-year coach Hunter Crane said. “They’ve put in the work every day and set goals back in June and July that they wanted to win a state championship. They’ve done nothing but come to work every single day, and I couldn’t be more proud to have led this team.”

Oxford (19-5) made three previous trips to North Half before this season but was eliminated each time. The Chargers broke through against their Region 2-5A rival — the teams split their two regular-season matchups — and will get their first shot at a state title Saturday against South champion West Harrison in Madison.

“It feels good because I don’t ever think we’ve gone to state before,” O’Connor said.

O’Connor, an eighth-grader, scored in the 51st and 68th minutes to run her goal tally to 26 on the season and set a program single-season scoring record. The previous record was 25, though O’Connor said the personal milestone was the furthest thing from her mind.

“I knew, but it wasn’t about breaking the record,” she said. “It was just about winning tonight. I wasn’t worried about that.”

It wasn’t always as easy as the final score might indicate.

Shinall bent a shot inside the right post in the 11th minute to give Oxford the early lead, but the Chargers had trouble adding on despite numerous chances. Pass after pass went over the Tigers’ backline to O’Connor, Madisyn Longnecker and Grace Ann Joyce only for their shots to miss the mark or be turned away.

Oxford clung to the one-goal lead early into the second half until Joyce netted a header off a corner kick from Addison Mills in the 46th minute to give the Chargers some breathing room.

O’Connor gave Oxford a little more with a breakaway goal less than 5 minutes later before sandwiching a strike from long distance between goals by Shinall and Nicole Wilkins to etch her name in the record book.

“She’s so talented, she’s so fast, but just her drive and her motor is what puts her over the top every game,” Crane said. “She gives it to you 100 percent from whistle to whistle.

“To win the first North Half championship and send my girls to the state championship and set the single-season goal record, that just makes a statement for how far we’ve come this year as a team. I just couldn’t be more excited.”