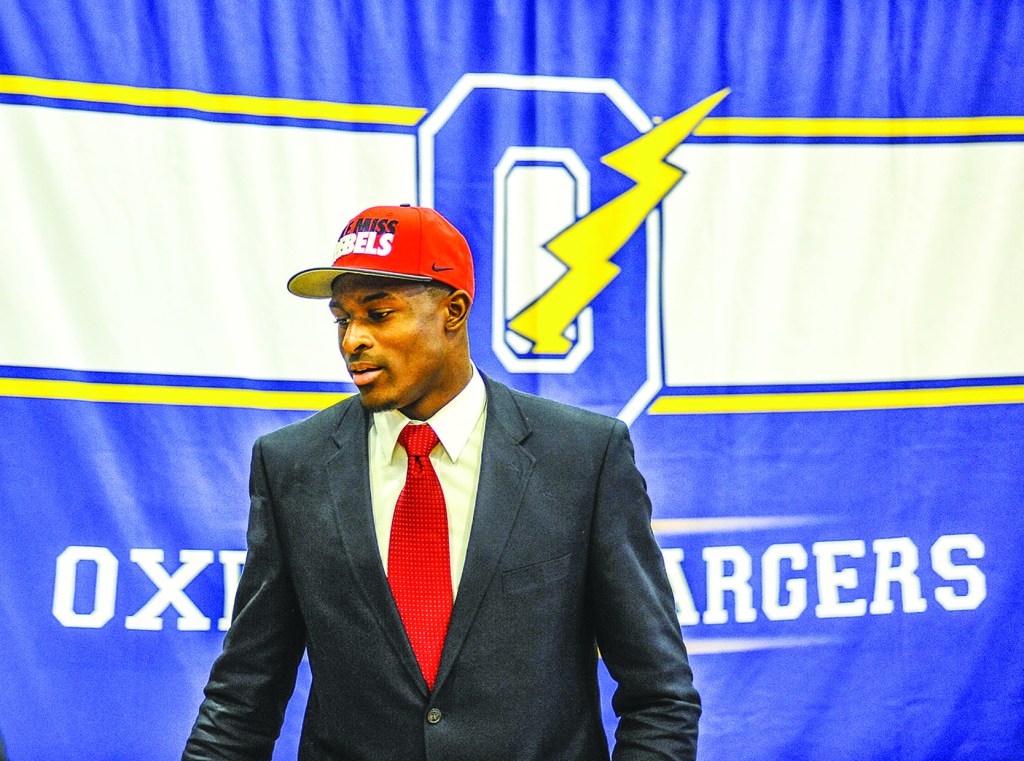 Oxford High's DK Metcalf was among those signing National Letters of Intent to play football at Ole Miss, on National Signing Day in Oxford, Miss. on Wednesday, February 3, 2016.

Ole Miss didn’t land every target remaining on its board and even lost one it already had in the fold, yet Wednesday still proved to be the most successful signing day in program history.

The Rebels rode some momentum early in the day to a consensus top-7 recruiting class nationally. Ole Miss’ 24-player haul was ranked seventh by Rivals.com, sixth by 247Sports.com, fifth by Scout.com and fourth by ESPN, one spot higher than the 2013 class headlined by Robert Nkemdiche, Laremy Tunsil and Laquon Treadwell.

“It just is a testament to everything that we’re doing here and that we stand for, the relationships we’ve built over the course of 18 to 24 months that allowed us to bring home today an arguably top-5 class,” Ole Miss coach Hugh Freeze said. “We feel like it is, top to bottom, the best class that we’ve had, and we’ve had some good ones.”

Brown also had the hometown school, Mississippi State, and Alabama among his finalists but spurned both by picking Ole Miss during a ceremony at his high school. Anderson put a creative touch on his announcement, releasing a video through Bleacher Report of him skydiving and unzipping his suit once on the ground to reveal an Ole Miss T-shirt underneath.

“(Brown) actually told me about two weeks ago,” Freeze said. “After my in-home visit, he called me on the way home and just let me know, and I said just me and you are talking about it.”

Ole Miss also held onto Manvel four-star running back D’Vaughn Pennamon, who had been verbally committed to the Rebels since the summer but pondered offers from SEC West foes Alabama and Texas A&M early in the week after visiting all three schools last month.

Brown’s signature gave the Rebels the state’s top 2 receivers in the recruiting cycle as ranked by every major recruiting service along with Oxford’s D.K. Metcalf with Laquon Treadwell (NFL Draft) and Cody Core (graduation) both leaving. Anderson joined early enrollees Myles Hartsfield and Greg Eisworth as the class’ third safety and could get immediate playing time with Trae Elston and Mike Hilton both being out of eligibility.

“I think all of them in time are going to develop into really good offensive linemen,” Freeze said.

Defensive misses
The one notable omission in the class was quality depth along the defensive line with the Rebels whiffing on all of their top uncommitted targets at the position Wednesday.

“The defensive line, we had a good pool (of targets),” Freeze said. “We’re battling some really good places. They’ve got a lot of great options. Sometimes you miss on those, and it makes you feel like you didn’t satisfy your exact depth.”

Freeze said those positions will have to be addressed with mid-year enrollees in next year’s class, but for now, he likes what he’s got.

“Looking at paper, I think this one’s deeper (than the 2013 class),” he said. “That’s just paper and potential, but I’m not sure that it’s not a little deeper.”