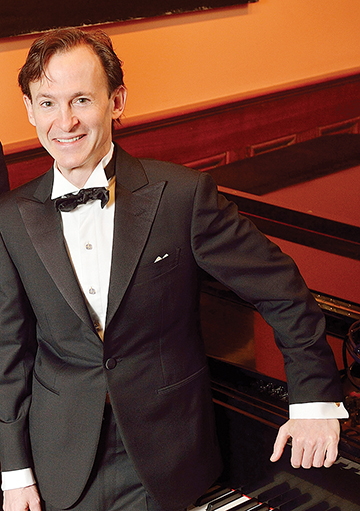 Bruce Levingston will debut his latest work on Feb. 23 at the Ford Center.

“Heavy Sleep,” the latest album by concert pianist Bruce Levingston, artist-in-residence at the University of Mississippi, has been included on the New York Times list of Best Classical Recordings of 2015.

Levingston, an acclaimed international performer, recorded “Heavy Sleep” at the famed Sono Luminus Studios outside of Washington, D.C. The album is a collection of works centering on a common theme of loss and rebirth. Levingston chose each work for “Heavy Sleep” based on the spirit of composers both past and present.

The New York Times’ recognition crowns a remarkable list of achievements for Levingston during 2015.

“This has certainly been one of the most exciting and fulfilling years of my life,” Levingston said. “I had some wonderful performances in European opera houses, a great reception for my album ‘Heavy Sleep’ and my new book ‘Bright Fields’ on the artist Marie Hull, an exciting time curating a show of Mrs. Hull’s paintings at the Mississippi Museum of Art and, maybe most importantly, meeting and teaching some of the most inspiring students I’ve ever encountered.”

As the Chancellor’s Sally McDonnell Barksdale Artist-in-Residence, Levingston introduced students to renowned artists such as filmmaker Ken Burns, political cartoonist Marshall Ramsey and poet Beth Ann Fennelly during 2015. His special seminar class, Art and the Republic, explored how art, in all forms, affects our society.

“The interchange with these amazing artists and these brilliant students was riveting,” Levingston said. “I absolutely was learning right along with the students.

“We all felt as we took on extremely complex societal issues, some of which we did not always agree upon, that we found a way to discuss things in a civil and thoughtful way. Ultimately, everyone grew extremely close as a bond of trust and respect permeated our sessions.”

Levingston’s role at UM reaches beyond the classroom, as demonstrated by his March 2015 performance “Music Noir: An Evening of Words and Music” which brought together a distinguished group of local writers, artists and performers, including UM Athletics Director Ross Bjork.

Bjork is a special person and a natural performer, and the two have cultivated a close friendship since coming to UM, Levingston said. Bjork is equally complimentary of Levingston’s accomplishments and his ongoing contribution to the arts.

“Bruce Levingston continues to inspire across the world and here in Mississippi with his musical and intellectual talents,” Bjork said. “This latest recognition by the New York Times further validates his musical talents to the broader community and will make us further appreciate the treasure that is Bruce.

“Even more, Bruce utilizes his musical talents as a platform to contribute to the broader community by pulling people together from diverse backgrounds under a common cause. Bruce gives the university community his time, talent and resources, and we are fortunate to have him at Ole Miss. Congratulations to my friend Bruce on another prestigious recognition.”

The upcoming year promises to be equally outstanding for Levingston, with performances scheduled at Carnegie Hall and Teatro del Lago in Chile. His next record, devoted to the music of prominent American composer Philip Glass, will be out in time to honor Glass’s 80th birthday. Included on the album is a recording featuring actor Ethan Hawke reading “Wichita Vortex Sutra,” a poem by Allen Ginsberg set to music by Glass.

“We have performed together in other parts of the world, and are now about to present six shows in New York City highlighting our love for dance and music. I am performing onstage while Alessandra and Herman dance together. We’ve chosen some of the most beautiful pieces of music and asked some of the most gifted choreographers from around the world to create dances for us. We will premiere our show in Oxford on Feb. 23 just before we take it to New York.”