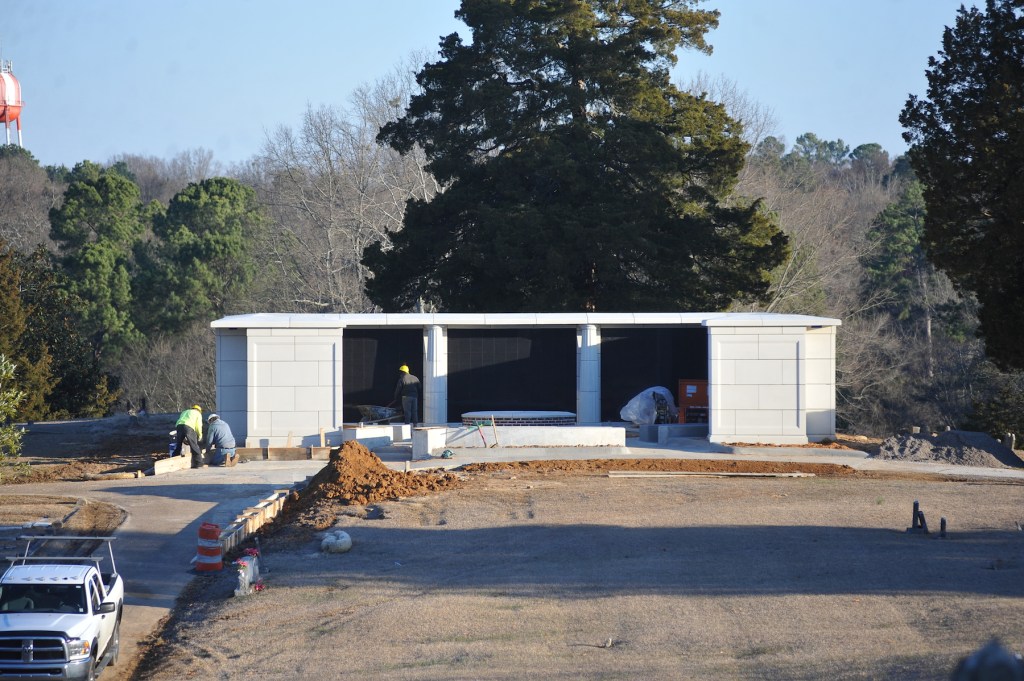 Construction continues on the columbarium in Oxford, Miss. on Thursday, February 4, 2016.

A new columbarium that has been under construction for about a year at the Oxford Memorial Cemetery is expected to be completed within the next few weeks, according to Assistant City Planner Reanna Mayoral.

“We are hoping to have a final inspection in about a week or so,” Mayoral said this morning.

Depending on the inspection and how many final punch list items the city has left to complete, the columbarian could be ready by the end of the month.

“Could be two weeks but four weeks is probably a safer number,” Mayoral said.

The sale of the niches will help provide funds for maintaining the cemetery that is quickly running of room for new gravesites.

The Oxford Board of Aldermen approved a resolution Tuesday setting the prices of the niches, which range from $1,900 to $3,200, depending on the location of the niche in the columbarium. The niches that are in the front and at eye-level are more expensive compared to those on the top or bottom levels.

The city will begin selling the niches about March 1, Mayoral said.

Construction began on the columbarium about a year ago. There are close to 800, 12 inch by 12 inch by 18-inch niches that could fit six smaller urns. The ordinance limited families from purchasing more than six niches; however there will be no limit on how many urns can fit into the niche.

Ownership of the niches will be recorded with the Lafayette County Chancery Clerk. Once a niche is purchased, future transfers of ownership will be allowed but not by the city of Oxford. If an owner sells their niche, it would solely be up to an attorney to transfer the property and the new owner is responsible for purchasing a new marker plate.

City staff would approve the marker; however a family can decide what they want to put on the marker as long as it’s not vulgar or obscene and “fits in the spirit of the cemetery.”

Funeral home directors will be required to contact the city to schedule interment within the columbarium. A minimum of 36 hours notice is required. Proof of ownership will be required before interment and services are recommended to take place from 8 a.m. to 3:30 p.m. Monday-Friday if possible. Otherwise there is a $50 per hour fee for services after 3:30 p.m. and on weekends, with a minimum of two hours.

No niches will be opened and closed except under the direction and control of city personnel and a court order will be required to remove the remains after internment.

OPD on the move?