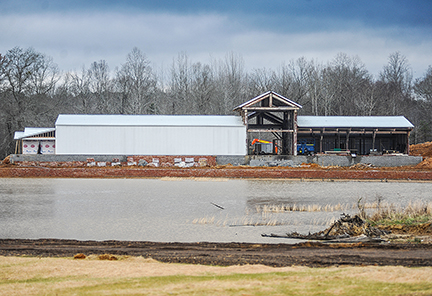 Bruce Newman The Jefferson, near Oxford, is under construction on Highway 6 east. Owners went before the board of supervisors this week seeking resort status in order to obtain a liquor license. They were denied and are expected to appeal to the state tax commission like several other businesses in the county have done.

The owner of a new wedding and events venue outside Oxford came before the Lafayette County Board of Supervisors Monday seeking resort status in order to be able to have beer, wine and liquor at their location.

Tom Green, who is the owner and operator of The Jefferson, asked the board to allow his facility that is currently under construction to be granted resort status. The venue is located approximately four miles from Oxford on Highway 6 where wine and liquor are not allowed.

“We were trying to apply for a liquor license for resort status and I was told I needed to come before you,” Green said.

Board president Jeff Busby asked Sheriff Buddy East if his “feelings had changed about opening a liquor license in the county?” East responded with a “no, sir.”

Busby asked for any discussion from the board and Supervisor Chad McLarty responded with a motion to deny.

Busby explained to Green that he has the option to appeal the board’s decision to the state tax commission after garnering 100 signatures in support of the resort status from neighbors, which is what most businesses in Lafayette County end up doing.

Supervisor Mike Roberts seconded the motion by McLarty. Supervisor Kevin Frye was opposed to the motion, which passed by a 4-1 vote.

According to their website, The Jefferson, which takes its name from William Faulkner novels, is a 17,000-square foot building that includes a 7,350 square foot grand hall, as well as three smaller rooms. There is also a built-in stage, two 45-foot long bars, a see-through gas fireplace and two prep kitchens.

The facility has been constructed with the use of reclaimed materials from textile mills and buildings in Virginia, South Carolina and Tennessee. According to their website, the venue is expected to be available in the spring.

Other businesses have followed, including The Ravine, Goose Creek Clubhouse near Wellsgate Subdivision and Plein Air in Taylor. All of them were forced to go through the state tax commission to be granted their liquor license.

OPD on the move?