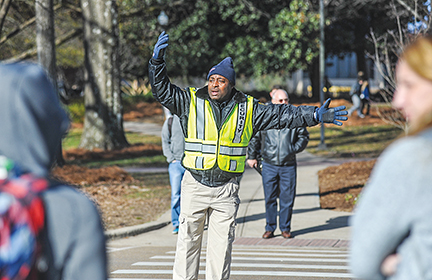 Willie Willingham sings while working the crosswalk near Barnard Observatory, in Oxford, Miss. on Thursday, January 28, 2016.

University of Mississippi students may not have heard the name Willie Willingham, but they know him as the “Singing traffic man” on campus.

Willingham has been directing traffic on Ole Miss’s campus for the past semester. He is easily recognized by his voice.

“That’s my happy zone,” Willingham said. “When I am singing, I’m focused.”

He was trained as a security cadet in 1992. He started out in regular security services and began at the university with a squad that would check dorms and break up parties, before directing traffic beside the Farley building.

Willingham said he prefers the positive atmosphere of keeping people safe while helping the traffic flow.

“In order to keep people from getting aggravated, the traffic needs to be moving; it doesn’t need to be at a standstill,” he said. “I’m that way with pedestrians and the people that’s driving vehicles.”

Recently, he decided to get his GED in order to fulfill his new dream of graduating college. After working a long shift of guiding pedestrians and vehicles, he meets with his GED coach to study.

“I just think its common sense,” he said.

Willingham made it all the way to 10th grade at Lafayette High School before he dropped out due to family issues. He worked at construction and plumbing jobs for years as a way to feed his family.

“After that, I just kind of threw in the towel and went to work,” Willingham said.

Although it has been years since leaving LHS, Willingham is making progress.

Bruce Bellande, his GED coach, said he is gaining ground and Willingham is not giving up.

“He has a very strong work ethic,” Bellande said.

signed up to be a coach through the Lafayette County Literacy Council.

“Since I’m semi-retired, I wanted to invest my time wisely,” Bellande said.

Willingham is his first student, but Bellande said he knows how valuable the tutoring program is to adults going back to school.

Willingham wants to do more than just get his high school equivalent; he wants to do well enough for an academic scholarship. His next goal is to earn a college degree.

Willingham said when he sees the students walking to and from class, it reminds him to stay on course in his education.

Students tell Willingham to keep singing and to stay positive as they walk to class. It makes him happy because he has always identified as a being happy person throughout his life.

Singing and staying positive helps Willingham stay on track. He hopes that his positivity will help others do the same.

“I would encourage anybody to go back to school, simply because I think being educated is the way out of poverty,” Willingham said.