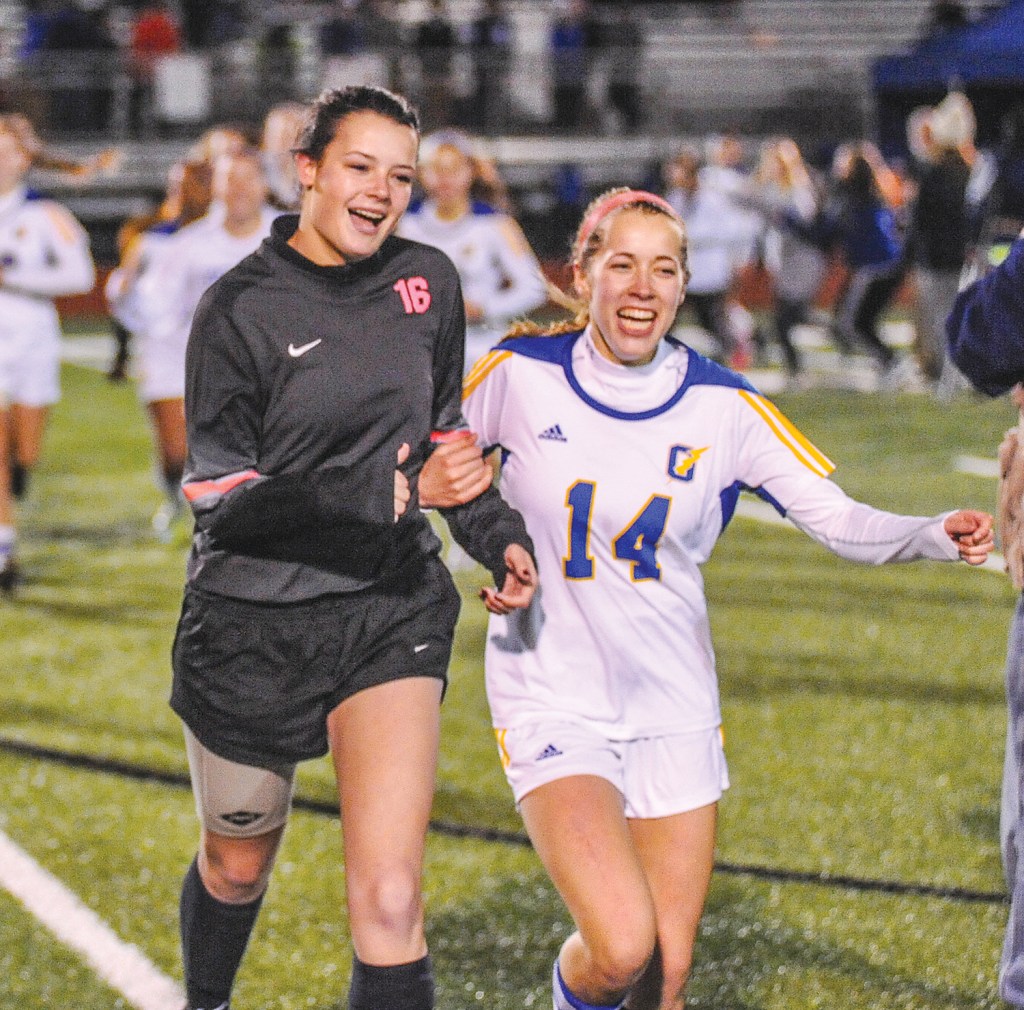 Oxford’s Bailey O’Connor, left, and Anna Dennis celebrate the Chargers’ win over Saltillo on Wednesday. Oxford will try to win the first state title in program history when it faces West Harrison on Saturday in Madison.

The second half of Wednesday’s MHSAA Class 5A North Half championship was the most fun Oxford girls soccer coach Hunter Crane has had all season.

He wants to keep the fun going for 80 more minutes.

The Chargers face West Harrison for the state championship Saturday at 4 p.m. on the campus of Madison Central High School. It is the first appearance in the state title match for Oxford in program history.

“We’re just going to try and keep it routine,” Crane said of his team’s approach. “Try to keep the girls even keel and stuff. We’ve had some nerves we’ve seen in the start of both halves the past two games, and I think we worked that out in the first half and really turned it on in the second half.”

Oxford (19-5) finds itself one win away from a state championship after a dominating 6-0 win over Saltillo.  The scoring may not come as easy for the Chargers on Saturday as West Harrison (17-3-2) has been just as stingy a defense as they have been during the year.

The Hurricanes have allowed only one goal during the playoffs and held opponents to 0.5 goals per match during the regular season.

“They play good, solid defense,” Crane said. “I’ve talked to some people that have said it’s got some weaknesses to it, but for the most part, they play good defense. That’s similar to us. (Low-scoring games) are to be expected.”

Offensively, West Harrison is led by junior Gabby Vincent, who has 20 goals while teammate Haley Kim has 17. The Hurricanes have been unstoppable in the playoffs thus far with an 8-0 win over Provine in the opening round followed by a 3-1 win over South Jones then a 2-0 win over the defending 5A champion West Jones in the South Half title match.

With the North Half match pushed back a day due to the inclement weather that hit the area on Tuesday, it gives Oxford one less day to practice and prepare for the Hurricanes. With the way Wednesday night went, Crane is perfectly fine losing 24 hours of prep and rest time.

“The crazy thing is we play better rested, but I think the quicker turnaround won’t hurt us at all,” Crane said. “Four is a little closer to our normal game time, and our theme is just to not change it too much during the playoffs.”