Back Roads to the Wild West, part 2 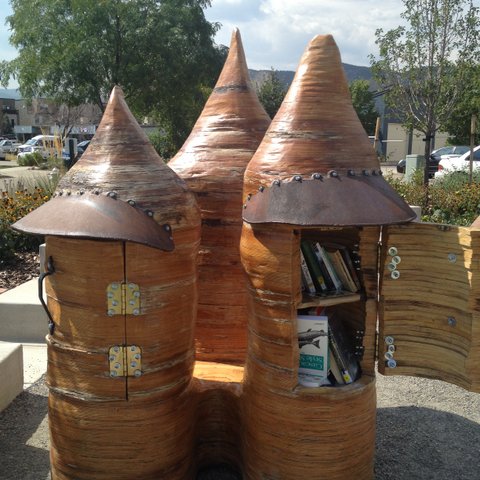 When I started writing about our September western trip, I fully intended to share the journey in one article. This is the second column in a two-part series.

If you read part 1, you will recall that we had been advised to just scoot across Kansas and not expect too many adventures until we reached Colorado. That didn’t happen, so we left the Prairie Trail, Buffalo Bill, the hoodoo mushroom rock, fields of sunflowers and the largest windmill farm in Kansas, and skirted Denver the next day to reach Boulder before rush hour began.

Our friends welcomed us with a fresh fish dinner, followed by hours of catching up with old and new stories. We made plans to explore Estes Park and the Great Rocky Mountain National Park the next day. Estes was an exciting destination for me since a few years earlier our host had given me a copy of “A Lady’s Life in the Rocky Mountains,” the incredible story of Isabella Bird’s travels across the Colorado mountain range and her determination to reach Estes Park.

Bird’s letters, published in 1879, had whetted my appetite for what was in store on our first visit to the Rockies. We had flown over the same mountains many times, but had never explored on the ground. Words escape me when I try to describe the incredible beauty waiting around every curve.

Coming back to Boulder on the Peak to Peak road had me leaning side to side in my seat, not really fearful, but respectful of the winding road and majestic views from every direction.

Another surprise from our hosts – tickets the next evening for the opening night of the Boulder Philharmonic Orchestra at the beautiful Macky Auditorium at the University of Colorado. The weather was perfect for a September evening as our adventures continued.

We explored the city of Boulder the next day with its wonderful green neighborhood spaces that had little free libraries scatted around, did some serious shoe shopping, and enjoyed lunch at the downtown walking mall. We were leaving the next day for a new destination, the Great Sand Dunes National Park, nestled against the Sangre de Cristo Mountains.

We were excited to have found a back road to Golden, famous as the home of Coors Beer, but more important to us as the final resting place of our friend we had met in Kansas, Buffalo Bill. Then we entered the small mining town of Leadville where I heard one of the saddest tales on this trip, the story of Baby Doe.

Horace Tabor made millions in silver mining while he and his second wife, Baby Doe, created quite a scandal in the late 1800’s.

We visited the small shack at Matchless Mine where she was found frozen, dead of a heart attack, in 1935.

After enjoying a lavish lifestyle, Horace lost his money in the silver crash and on his dying bed in 1899, told Baby Doe to hold on to Matchless Mine. I felt like a trespasser as I entered her cabin door where her personal effects were still in place just as she had left them. We were the only visitors so the curator encouraged me to take all the photos I wanted with a warning that her shadow had been known to appear in developed pictures.

No restaurant again, so our handy cooler, freshly stocked, provided lunch at the mine. We chose not to finish the Route of the Silver Kings, a 20-square mile area with lots of rough, non-maintained roads with warnings that cars going uphill have the right of way.

We drove the scenic route to Salida then got on state Highway 17 to Alamosa where we opted out of the second adventure of the day, a visit to the Colorado Gators Reptile Park. We have since wondered what we missed since it was in my guidebook, “Off the Beaten Path.” Maybe next time. A new day of adventures tomorrow.

Alamosa was the perfect base. We first visited the Great Sand Dunes National Park and quickly determined that we would not be joining the more adventuresome folks we could see climbing the tallest dunes in North America.

We met one man with a sand board who said it was harder to carry the board in the wind than it was to slide down the dunes. Our park map showed 32,643 acres in this National Park and it advised us to not trust GPS mapping. Since the wind and water constantly move the sand, the dunes are a miraculous playground for the brave.

We had mapped out a scenic square from the park to Fort Garland, base of Kit Carson and the Buffalo Soldiers after the Civil War. It was interesting to walk inside the original officer’s quarters, the commandant’s quarters, and the infantry barracks. Five of the 22 original buildings still stand. Then it was down to San Luis, the state’s oldest town, where we stopped at the Sangre De Cristo Catholic Church. I spotted a small folk art painting of St. Francis of Assisi in the gift shop and knew that it was going back to Mississippi with me. I asked about the artist and it was Teresa, the 82 year-old-gift shop volunteer, who found a smashed can on the road and saw a piece of beauty in the shape. I asked her to sign it and she was happy but almost embarrassed since “no one has ever asked me for my autograph before.”

She directed us to the Hill of Piety and Mercy where the stations of the cross are represented by 15 exquisite bronze sculptures leading up to the Chapel of All Saints. It was easy to see why this hillside overlooking this lovely town has become a famous Catholic pilgrimage site. The last leg of our “square journey for the day” took us by Manassa, home of Jack Dempsey, but the tiny museum was closed. A final night in Alamosa before heading to New Mexico the next day. The third and final chapter of this journey comes later.

Brenda West is an Oxford resident. Contact her at olemisswest@hotmail.com.