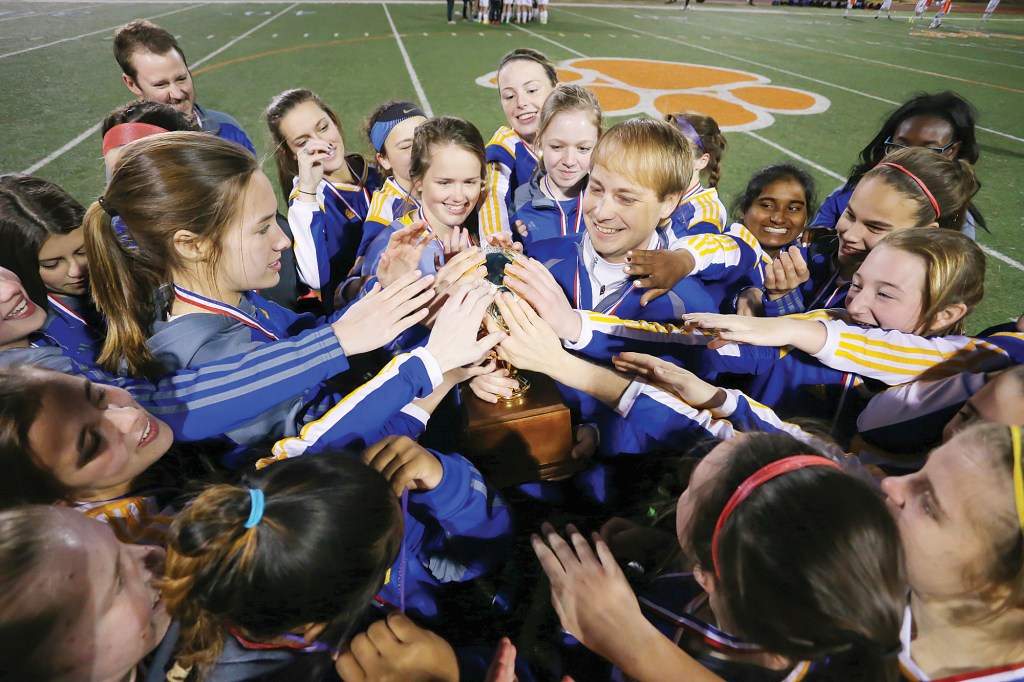 Oxford players celebrate their 2-1 win over West Harrison in the MHSAA Class 5A girls championship soccer match at Madison Central in Madison on Saturday. The Chargers’ victory gave the program its first-ever state title. (Keith Warren)

MADISON — Defense was supposed to be on display between Oxford’s and West Harrison’s girls soccer teams, and it did not disappoint.

Some offense did find its way into the match, which Oxford won 2-1 to claim the MHSAA Class 5A state championship on Saturday afternoon at Madison Central High School. It was the first final appearance and state championship for Oxford in program history.

“It means everything to me,” Oxford coach Hunter Crane said of leading the Chargers to their first-ever title. “I love those girls just with everything I got. I feel it’s just one big family. I’m excited. I don’t even know what to feel right now.”

The Hurricanes got on the board first when junior midfielder Gabby Vincent connected on a long-range shot for the 1-0 lead 13 minutes into the match. It was a short-lived lead as Addison Mills knotted things up at 1-1 for Oxford when she scored on a free kick at the 15-minute mark.

Both teams had runs and scoring opportunities, but the defense reigned the rest of the half for a 1-1 score at the break.

The second half was all Oxford (20-5), which was the aggressor for 40 minutes but could not break the seal off the net with every shot finding West Harrison goalkeeper Haley Lott’s gloves. 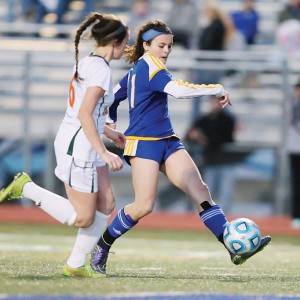 Morgan O’Connor scores the goal that gives Oxford the 2-1 lead late in the match against West Harrison. (Keith Warren)

That goal did eventually come when eighth-grade standout Morgan O’Connor received a flick from senior Zoe Scruggs and finally got one past Lott in the 76th minute to give the Chargers the winning margin over West Harrison (17-4-2).

It was just another memorable postseason moment for O’Connor, who scored the winning goal against Germantown in the second half to send Oxford to the North Half championship last week.

“I was not scoring tonight much and I was having a bad day, but I’m just glad I made it in,” O’Connor said of her state title-clinching goal. “I didn’t want to give up even though I wasn’t hitting shots.”

First time for everything

Crane took over the Chargers back in the summer after previous coach Laura Flint decided to step away. Every coach has a goal for his team to be the last one standing at the end of a season, but Crane knew he had the players to be a first-year state champion.

“I knew the talent was there, we just had to bring this team together,” Crane said. “(Assistant) coach Eric (Thomas) and I felt like we had a good plan coming in. I really think that back in the summer when we saw the talent and saw the plan starting to come together that we really did have a shot at this thing.” 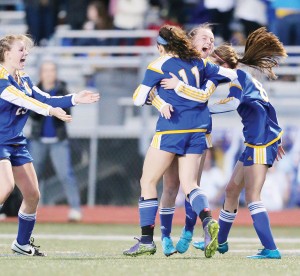 Morgan O’Connor (11) is congratulated by teammates after scoring the game-winning goal against West Harrison. (Keith Warren).