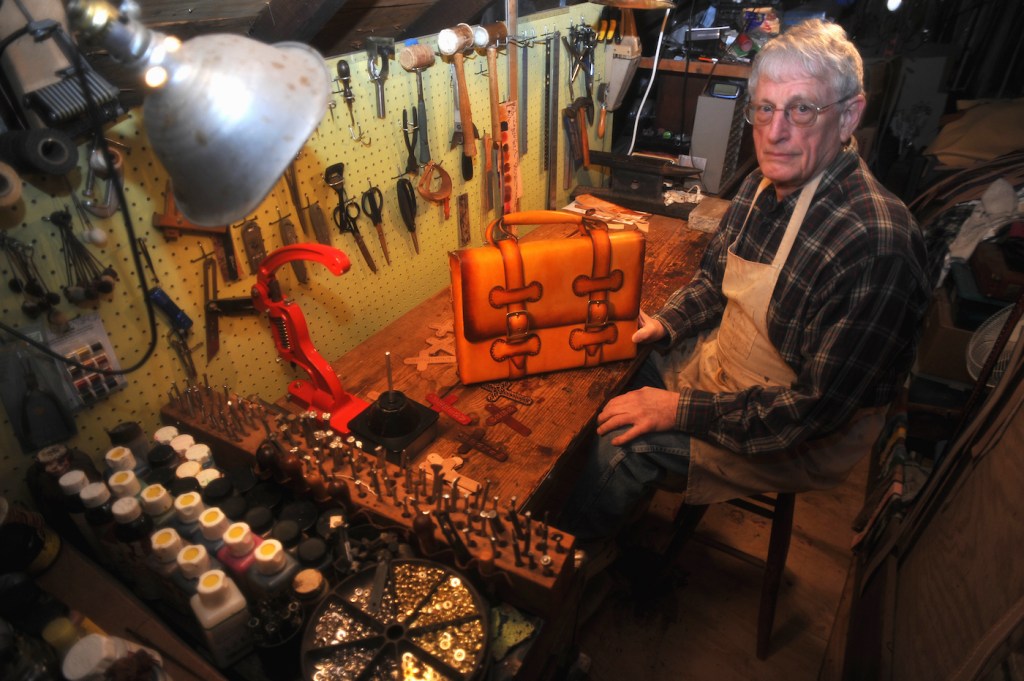 One day in the early 1970s, Ed Tropp and his wife Sylvia sat down and thought not about what to do for a living, but where to do their living.

That’s how he wound up in Oxford, and for 13 years ran Mr. Oliver’s Leather Shop on the Square.

Fast-forward through raising children, getting them through college and other career adventures, the 69-year-old Tropp decided about a year ago to get back into working with leather and creating his art again.

Whether it’s a purse, a vest or a Western scene carved into leather and hung up like a painting, it’s all Tropp’s speed and it’s all created in a workshop at his house.

Tropp, originally from Greenville, attended the University of Mississippi, earned a doctorate and then taught at Ole Miss and in Ontario, Canada. He had the leather shop while the kids were growing up, but was forced to switch gears for a while.

“I did it for that period of time, and the kids were thinking of going to college so I realized I needed to get a real job,” he said. “So I created another business, because when kids go to Vanderbilt, Vassar, Columbia and North Carolina, you’ve got to have money. I reached the point where I wanted to go back and do other things so I started it back up.”

What he did then … and now

In the early ’70s he was the first one to brand Ole Miss footballs.

Another partnership with the school had him creating saddles and harnesses for monkeys and rats at University of Mississippi research departments.

He crafted ankle and shoulder holsters for the FBI and local officers. He made 100 different seats for a restaurant in town. Then there were musician cases, leiderhosen, vests, bike jackets, clothes, chaps, holsters, skirts, gloves, knife cases, check cases, wine skins and much more.

He also won a national prize from an artist guild for a briefcase he created in the 1970s.

“At the leather shop we did custom leather work and it stretched from Alaska to Key West to New York City,” he said.

Now, he’s being more artistic and focused on design, which even includes hand-crafted jewelry.

“Primarily now I’m focusing on design and hand-crafted items,” he said. “I’m really making a lot of purses. I will eventually get into other things and go back to doing machine stitching and getting more of a different type of work.”

Some of that hand crafting means incorporating items like peacock feathers, snake and lizard skin, fleece from rabbits and deer horns into his work. He even uses Brazilian nuts, which he brings back from Brazil while on mission trips with Clear Creek Baptist Church.

Currently Tropp has two pieces in the Oxford Artist Guild show that is at the library, and one is a leather scene, which is done by hand carving and dying.

Working with high-quality leather can get expensive, so Tropp applied for and received a Mississippi Arts Commission production grant of $500.

“I’m buying materials for me to make things with,” he said. “Most of the leather I buy today is top-quality. It’s done in this country because all of the others don’t do it anymore. Most of mine comes out of Minnesota or Missouri. Leather can go for $10 a square foot. I buy full hides and strip my own.

“Some of this stuff is very, very expensive, and a grant like this gives me the ability to get expensive pieces to work with and to produce a very high-quality good.”

Tropp said artists are not guaranteed to receive a grant when they apply and he is grateful for the opportunity to receive one. He also recommends people pursue a grant to keep Oxford’s tradition of art appreciation and awareness.

“The importance in this is the fact that the Mississippi Art Commission has grants for artists,” he said. “I think it’s important that Oxford has a strong artists guild and they do shows in the area. They are trying to display their works where people can see them. The community needs to know that that’s there.

“The Mississippi Craftsman Guild is important also because it shows the best quality of the hand-crafted items and culture and history of this state. Mississippi artists are famous all over the year.”

What keeps him going

Tropp brings his wares to about two or three shows and arts events a month, except for the rainy months of November and December. He prefers to stay in the Southeast. While not traveling he is working, daily, on his craft.

It can take four of five days to create even something as simple as a purse, which a factory could crank out in minutes. It’s because he designs it from scratch and lets each piece of leather have its own identity, which is where his art comes into play.

“Each piece of leather has a different feel to it and according to what I see in it I’m going to create something different and you look at the leather, get the feel for the leather and know that leather will be good for this or that,” he said. “I’m going back and trying to create a design for it.

“If you go down to the artist guild show at the library right now you’re going to see two of my pieces and one of them is more of a piece of artwork, but it’s a purse. I’ve sold very involved pieces that people would consider more art than a functional piece.

“The beauty of the leather is what needs to be brought out – what you need to feel. Some art you can look at but a piece of leather, a leather function, you can feel it. That’s what it’s there…it’s a texture, a feel. It’s going to grow and change. You’re going to use different techniques. You’re not just making someone a purse, you’re making something that they should see as beauty and that they’re going to appreciate it because it’s going to be with them and grow with them.”

Patience is a virtue, because there’s no eraser or painting over his art.

“If you make a mistake, it’s gone — the whole project,” he said. “If you let the wrong piece of dye hit it, there’s nothing you can do.”

It’s a doctor in town coming up to him and saying he still has his dad’s briefcase from the 1970s and it is still as good as new is the kind of thing that brings great joy, and that’s why he will keep on crafting.