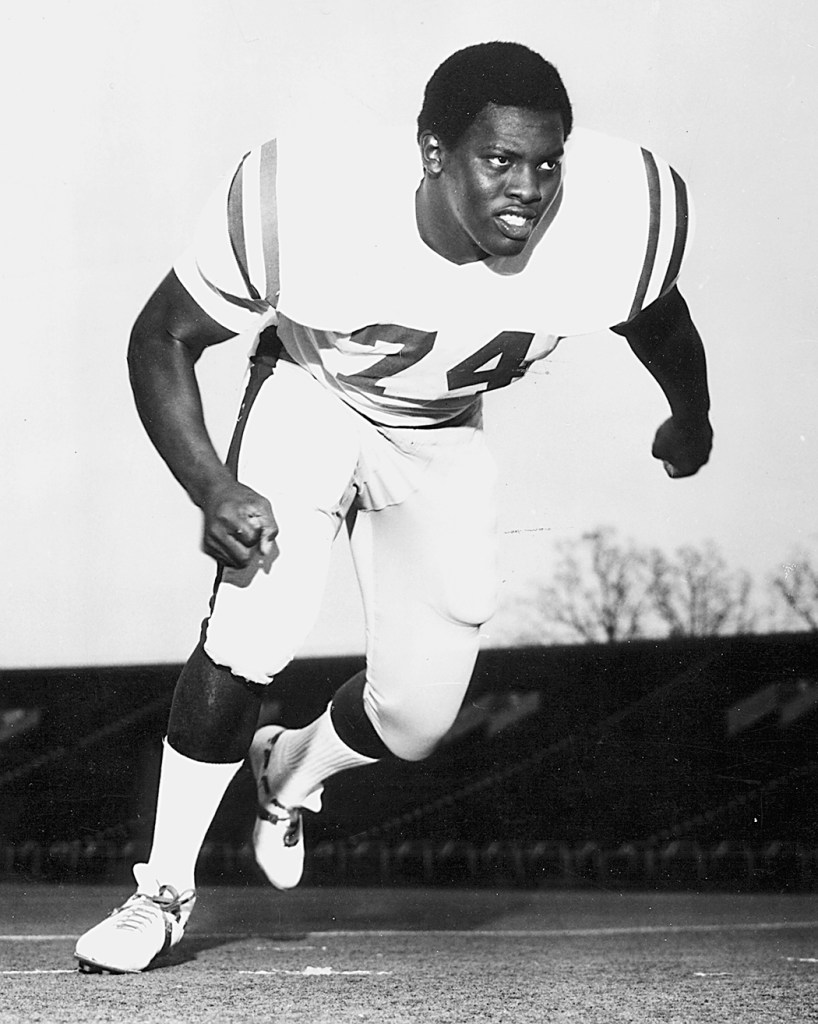 As football season began in the fall of 1970, a Jackson Clarion Ledger columnist speculated when and if the University of Mississippi would recruit its first African-American player.

That fall the University of Mississippi Athletic Department did recruit the first black athlete, but that was Coolidge Ball, a basketball player. Mississippi State and Southern Mississippi had already recruited black football players, as had other teams in the South Eastern Conference. The Clarion Ledger writer predicted, as long as “Ole Miss anthem is ‘Dixie’ there will not be an integrated football team.”

The columnist went on to state, “There will be no Negro flashes in the Ole Miss backfield, or lightning-fast black flankers in the flats or tough Negro troopers in the offensive or defensive lines as long as the stars and bars of the Confederacy remains the true standard of the school.”

Harvard trained Latin professor Alexander Bondurant, had been the first Ole Miss football coach in 1893. He had also purposed the red and blue colors for Ole Miss. These colors had been borrowed from Yale and Harvard. In 1890 he wrote, “No phase of college life has a more rapid development in American institutions than athletics, a name to which there was no corresponding fact for the students of a generation ago.”

The Clarion Ledger columnist did not know that in the fall of 1969, one Ole Miss coach and recruiter had planted the seed in the mind of one young black man, that he should consider Ole Miss as his choice for a college education and a place where he could excel in football. Coach John A. “Junie” Hovious, who had been an outstanding player for Ole Miss from 1939 to 1941, was that coach.

In 1947, when Johnny Vaught became the Ole Miss head coach, he had hired the former Rebel as a defensive backfield coach. Hovious had been elected Colonel Reb and had also been elected to the Ole Miss Hall Of Fame. He had been a player for the New York Giants in 1945. His wife Kitty was a former Miss Ole Miss. In 1967 Coach Hovious was inducted into the Mississippi Sports Hall of Fame.

Each Ole Miss coach was given a certain area for recruiting by Vaught. In Yazoo City, Hovious had seen a young defensive tackle as a sophomore and thought that he would be a good addition to the Ole Miss defensive squad. He had not been told to seek out a black player; he was just looking for the best available recruit, regardless of color. In Robert J. “Ben” Williams, Hovious immediately liked what he saw.

Hovious introduced himself to Williams and his grandmother, Molly Haymer, with whom he lived. He had realized that William’s grandmother would be the key to his recruiting Williams for Ole Miss. He began to cultivate a friendship with Williams and his grandmother. When he would be in the area to watch Yazoo City play ball, he would go by Mrs. Haymer’s house for coffee before the scheduled game. By the time Williams was a senior, Hovious had made up his mind that he would be a great recruit for Ole Miss. He not only liked William’s skills as a football player, but he also liked his attitude.

The coach tried to convince himself that his color did not matter, but it did. If Williams were to become the first black football player at Ole Miss, he would be under a lot of pressure. He wanted to make sure that Williams understood this and that he could handle the pressure, and in time he would be proven correct in his assumptions.

Hovious’ son Bill, who was a former principal of Oxford High, related a story to me about the recruiting of Williams. When the coach would come to Yazoo City to watch Williams play, Jerry Clower, the noted Southern humorist, had spies to let him know the coach was in town. Clower had a long history of recruiting players for Mississippi State, and he wanted Ben to go to State.

In the fall of 1972, Williams became the first black Ole Miss football player. He had made the team as a freshman. He was 6-foot, 3-inches and weighed a little over 250 pounds. If Williams had felt any pressure as the first black football player at Ole Miss to make the squad, he kept it to himself. He ignored the waving of the Confederate battle flag and the playing of “Dixie.”

Williams was quoted as saying, “How can you be worried about ‘Dixie’ when you have a 6-foot 5,300 pound white boy foaming at the mouth across the line ready to kick in your teeth?” He went on to state, “If I play a good game, those white fans are going to stand up and cheer for me.”

Williams was also quoted as saying, “I came to Ole Miss because it was a challenge, and I liked a challenge. Also, I was recruited by Coach Junie Hovious, and I admired him a lot. He helped me make up my mind, plus I felt like I could make a contribution at Ole Miss. As far as what had gone before — in terms of race — my attitude was that I couldn’t change history. All that had already happened before I came to Ole Miss. If I couldn’t deal with that, I shouldn’t have come. I have no complaints about the way I was treated at Ole Miss. Nobody ever called me a (explicative) or anything else, and it wasn’t just because I was bigger than most people. My aim was to get an education and play football, and I accomplished that.”

Just like Coach Hovious had been elected Colonel Reb and was also elected to the Ole Miss Hall of Fame, so was Williams in 1975. He was an All-American in 1975, and he played for 10 years in the NFL with Buffalo. In 1997, he was admitted to the Mississippi Sports Hall of Fame. His life as an Ole Miss student in many ways followed that of his coach.

As a testament to the coach, he was one of his pallbearers when the coach died in the 1990s.

Back Roads to the Wild West, part 2