Rebels clamp down on Vandy for second straight win 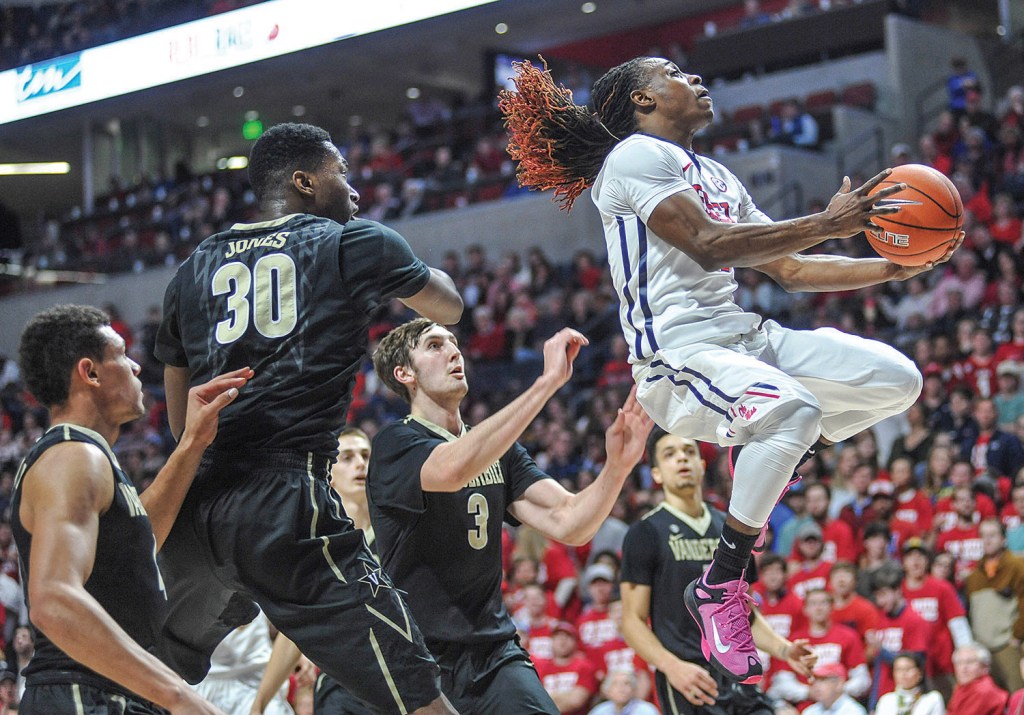 Vanderbilt has been one of the best 3-point shooting teams in the Southeastern Conference all season. Ole Miss has been the worst at defending it.

It didn’t play out that way Saturday at the Pavilion.

The Rebels mixed up their defenses to stick to Vanderbilt’s bevy of shooters and help them overcome their own shooting struggles, notching an 85-78 win over the Commodores. Stefan Moody led Ole Miss (15-8, 5-5 SEC) with 23 points despite having his worst shooting performance of the season to help the Rebels get back to .500 in league play and pick up their best RPI win of the season.

“Tonight was a huge win for us,” Ole Miss coach Andy Kennedy said. “It gives us momentum, gives us confidence and gets us back to .500 in the league.”

Tomasz Gielo had 16 points before fouling out late, one of five players to bow out because of fouls. Rasheed Brooks followed with 15 points while Marcanvis Hymon added 13.

Vanderbilt 7-footer Damian Jones wasn’t much of a factor, fouling out with 8:05 remaining. The projected first-round draft pick finished with just nine points and two boards in just 17 minutes as the Rebels, even without forward Sebastian Saiz for the sixth straight game, outrebounded the bigger Commodores (13-10, 5-5) 44-41 and turned 19 offensive boards into 25 second-chance points.

Luke Kornet led Vanderbilt with 20 points and nine rebounds. Wade Baldwin IV followed with 19 points and nine assists, but the Commodores’ normally reliant outside stroke wasn’t there to compensate for Jones’ absence most of the night.

“We just tried to drive (Jones) as much as possible,” Kennedy said. “That really changed the game with him out.”

Vanderbilt came in knocking down more than 40 percent of its shots from deep but shot just 32 percent (9 of 28) from long range two nights after tying a season-high with 13 3s against Texas A&M. The Commodores missed 13 of their last 17 shots from beyond the arc while Ole Miss’ mixing and matching forced them into 19 turnovers.

Said Vanderbilt coach Kevin Stallings, “We were rushed. We had some guys that played very unsettled.”

Moody had a pair of 3s to spark a 14-2 run for Ole Miss midway through the second half that gave the Rebels their biggest lead at 68-55. The Commodores scored 12 straight points over the next 1:36 to get within one, but Ole Miss scored the next seven and kept its distance down the stretch for its second straight win.

“This team has not handled in-game adversity as well as we need to, and we’ve wilted at times for whatever the reason,” Kennedy said. “But I thought tonight, man, we settled in and made some hard plays.”

Moody finished just 5 of 25 from the floor and 3 of 15 from beyond the arc as Ole Miss shot just 36 percent as a team. But the Rebels got enough defense and enough help for their leading scorer to win back-to-back games for the first time in a month.

“Some of our other guys are forced to step up,” Moody said. “The fact that it’s a long season, sometimes it just takes time for younger guys to figure it out. Our group is figuring it out.”