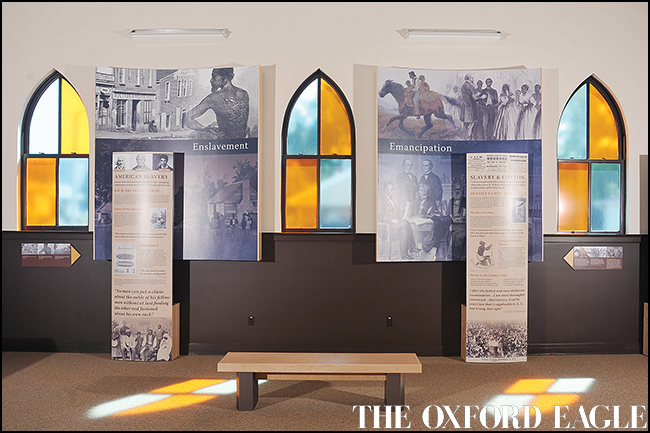 Since officially opening its doors two years ago, the Burns-Belfry Museum and Multicultural Center now has a new owner — the city of Oxford.

Last week, the Oxford Board of Aldermen accepted the historic church into its inventory of historic properties to be overseen by the Historic Properties Commission.

The church was built in 1910 on the site where Oxford freedmen first built their own house of worship after the Civil War. It was home to the congregation now known as Burns United Methodist Church until 1974. Author John Grisham purchased the building and used it as an office until he moved to Virginia. A group of residents approached Grisham, who agreed to donate the church in 2002 to the community to be restored.

For more than a decade, the Oxford-Lafayette County Heritage Foundation, a local historic preservation group, and the Oxford Development Association, a historically black community organization, worked tirelessly to raise more than $1.27 million from state and federal grants and private donations to complete Phase 1 of the project, which was the actual renovation of the building and the first group of exhibits.

Now that the main renovation is complete, the city will take ownership and add it to its growing list of properties that includes Cedar Oaks mansion and the L.Q.C. Lamar House and Museum.

The professionally designed exhibits present black history from slavery through civil rights. A few of the original church pews have been preserved and now sit in front of a large-screen television that shows interviews about the civil rights era and the church’s history.

The Burns-Belfry is now in the midst of completing the second phase of the museum, which will include oral histories on topics including Jim Crow, migration, black schools, school integration, civil rights, black businesses and more.

“We’ve worked on those for several months,” said Mae Shelby, a volunteer at the museum. “Those recordings will be used for an audio tour along with our reader rails.”

In 2015, about 1,119 people visited the museum. Some came alone, others came in large groups. Volunteers are on hand during the museum’s normal operation hours, from noon to 3 p.m. Wednesday through Friday and 1 to 4 p.m. on Saturdays.

“If special groups want to come in, they can call and make arrangements,” said Julia Thompson, also a volunteer at the church. “We will open the museum for special events at any time.”

The center has been used by area schools for educational purposes and has served as a place for weddings and family reunions. Local groups have used it for a meeting area and special events are held during Black History Month, Martin Luther King Jr. Day and other holidays throughout the year.

Many of the volunteers are people like Thompson and Shelby, who have been involved with the project for many years. Others are students at the University of Mississippi who come to the museum through the Honors College, Southern Studies or those working on degrees in museum studies. Others are just interested residents in the community.

Next to the door of the museum and cultural center is a guest book signed by just about everyone who has entered the home since its doors opened in 2013. Comments include words like “inspiring,” “blessing,” “amazing” and words of gratitude to those who worked so hard to preserve the church.

“This is a real asset to the LOU community,” Thompson said, “and also the surrounding communities.”

Thompson said some guests leave with smiles, some with tears in their eyes and some who leave without saying a word.

“When you look at the comments people have made (in the guest book) and see their faces as they read the exhibits, it demonstrates the struggles and fears and resistance the African-American community has felt,” she said. “And then, there are words that show progress. And we have made progress.”

Shelby said the new audio recordings, that will be eventually added to the museum’s displays, touch on many subjects and highlight community leaders.

“When we were doing this, there was a lot of discussion about how these people felt discriminated against or how the area dealt with integration and how people adjusted,” she said. “This is important history and information, not just for the African-American community, but for the entire community as a whole.”

For more information on the Burns Belfry, visit www.burns-belfry.com.

RebelWell has grown from a wellness site to much…