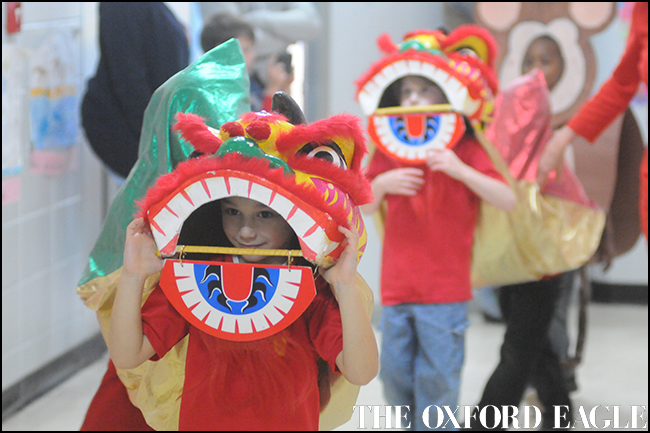 The Chinese New Year kicks off today, and Lafayette Elementary School kindergarteners are ready for it.

Around 30 students from Amy Atchley’s class celebrated on Friday with a traditional Chinese New Year’s Day parade, even featuring a dragon costume.

Atchley said the students have been learning about Chinese culture and traditions, and the parade showed off what the students were learning to the other grades, teachers and staff.

“The students loved learning about The Great Wall of China,” Atchley said. “We learned China made the first gunpowder, paper and paper money and that tea was discovered in China. The students were impressed that panda bears and goldfish were from China.”

While Chinese New Year is today, the holiday usually hits from Jan. 21 to Feb. 21, according to timeanddate.com.

“Many were jealous when they found out that China not only celebrates Mother’s Day and Father’s Day but they also celebrate Children’s Day,” Atchley said.

It is believed Nian lives in the deep waters and comes out on China’s New Year’s Day. One way to ensure protection is to wear red and make loud noises. It will keep the monster away.

“Needless to say, the children will be wearing red and making lots of noise in our parade,” Atchley said Friday.

Other grades of children and teachers lined the halls of the elementary to watch the parade. As the students made noise with drums and cymbals, one student dressed up as Nian ran around as if the monster was running away.

Atchley said it was unique to the class to celebrate the holiday because an LES student is of Chinese heritage. It was a way to celebrate diversity as well as leaning.

“My goal for the unit would be that the children learn to respect and appreciate all cultures and their uniqueness,” Atchley said.