TAKING THE LEAD: Robinson prepares for junior campaign with Rebels 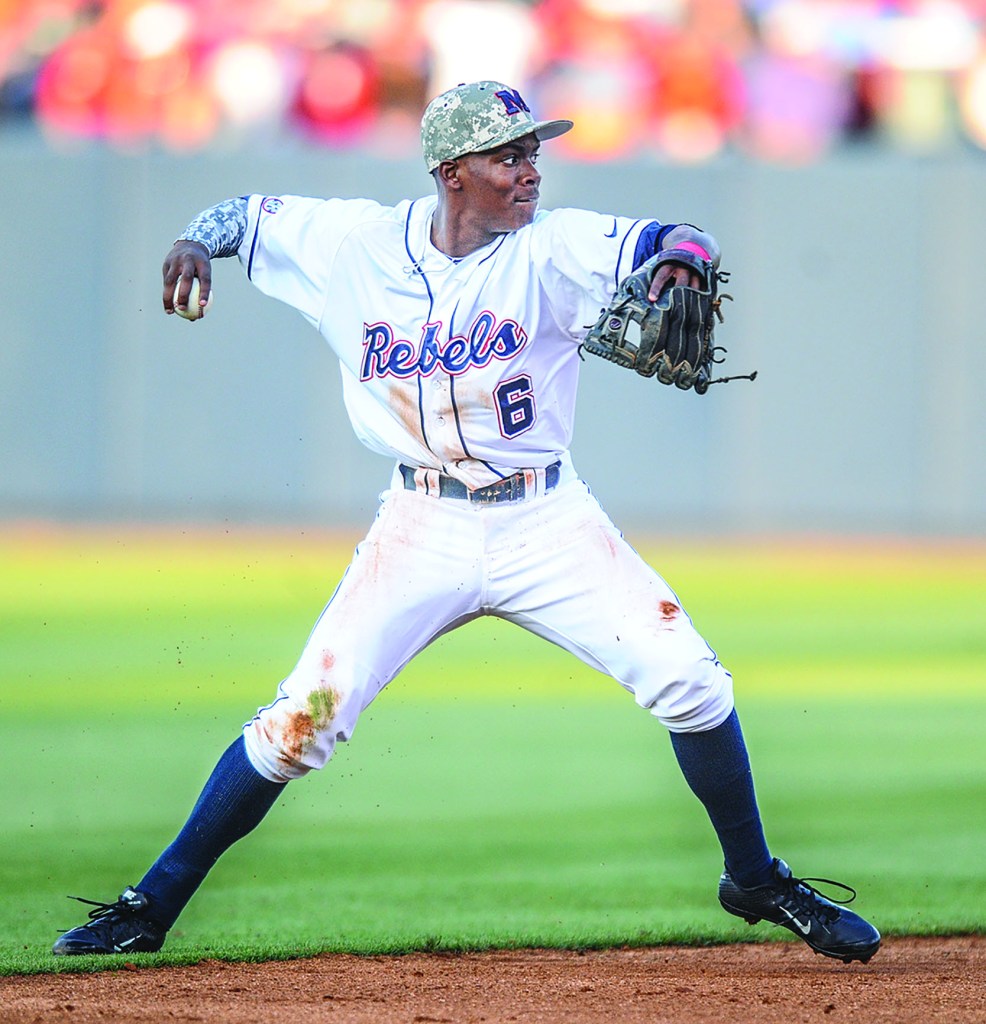 Ole Miss shortstop Errol Robinson (6) has been the recipient of numerous preseason All-American honors as he prepares to take over as one of the Rebels’ leaders in the upcoming season.

When junior Ole Miss shortstop Errol Robinson laces up the cleats and takes his place between second and third base this season, the pressure will be on.

That’s nothing new as he has felt the pressure since his first game at Swayze Field.

This season will be different though as he is no longer the freshman who has the potential to be one of the elite shortstops in the Southeastern Conference. He is is one of the elites.

“There’s no pressure,” Robinson said. “For me, I don’t feel like there is any added pressures. For me, it’s just about winning ball games and doing what I can do to win ball games. I learned from freshman to sophomore year it’s all the same. It’s all about playing baseball.”

Robinson may not be bothered by being one of the leaders on the team and the expectations that come with that responsibility, but the rest of the country have other things in mind.

The Rebels’ shortstop has been tabbed with preseason All-American honors by D1Baseball as well as Baseball America, which picked Robinson on the first team. The accolades continued as Major League Baseball scouting directors voted him as the top shortstop heading into the 2016 season earlier this month.

“I woke up around 10:30 (a.m.) when the Baseball America thing came out and I was hearing a bunch of congratulations and I was like, ‘For what?’” Robinson said laughing. “I came to Ole Miss to win a national championship. Obviously the accolades are great and I’m excited for it and extremely blessed and I’ll take that any day of the week, but honestly, it’s more about winning national championships. That’s where my focus is.”

After Ole Miss’ quick exit from the NCAA Tournament in the Los Angeles Regional last May, Robinson continued to work on his game and even learned from one of the greats in college baseball and the state of Mississippi.

“I was just making adjustments in games and being a better leader and kind of taking what different coaches had to say,” Robinson said of what he worked on during the summer. “You’re so used to hearing (Ole Miss) coach (Mike) Bianco and everything he has to offer, which is a lot. But getting able to play under legendary coach Polk was really good and really cool. I came back with a lot of new things.”

‘Lives for those moments’
While former first baseman Sikes Orvis was one of the fans’ favorites during his time at Ole Miss, Robinson was a close second and has more than likely taken over that mantle with Orvis gone.

When the Rebels made it to Omaha and the College World Series two years ago, Robinson made the catch for the final out against Louisiana-Lafayette in the super regional. It is just one of the examples that shows he does not mind the spotlight and will even search it out.

“I think if you know Errol and you watch him, he lives for those moments and he lives for the pressure and lives for the excitement,” Bianco said. “He brings so much energy and electricity to the stadium, and the fans love him. He’s one of those big-moment players. Some kids don’t want to be there and don’t want the spotlight. In basketball, you want guys who want to take the last shot and you want guys who want to make the pass and catch the ball. … He’s always been like that.”

Ole Miss opens the season against Florida International on Feb. 19 at Swayze Field.